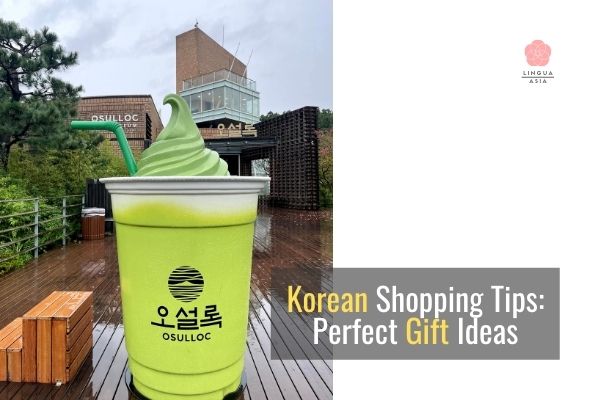 Need some cultural Korean gift ideas that are sure to please (or maybe something yourself ^^)?

This post will help you find the right gift for Koreans and anyone interested in their culture.

I grew up in South Korea and have been known to give a gift or two.

I’ll cover what to give in each situation by age group and gender.

Gift giving is a way of life in Korea. People give different presents on each holiday and occasion. In Korean culture there are even gifts for business situations. They also have their own unique shopping apps.

When do Koreans give gifts?

Seollal (설날) is Korean Lunar New Years. It’s the biggest holiday in the country. In Korea, this is more like Christmas in regards to gift giving, and Christmas is more like Valentine’s Day as we’ll explain later.

During this time, Koreans visit grandparents or parents and exchange gifts.

Normally, people get a big bonus or gift from their companies, such as amenity sets, packages of Spam or canned food.

For your dad, samchon or emobu (or any male relative working at a company), a necktie works great.

For your mom, emo or oesukmo (or female relatives), cosmetics, perfume or a brand scarf will win their heart.

For your kid, nephew or niece (or any child), pocket money in an envelope will wow them.
(I used to get about 100 USD from each adult relative as a kid.)

When you come of age, as in get a job, it’s time to pay it forward by giving gifts to elders and money to younger relatives.

It may sound strange, but my brother and I usually give money in an envelope to my grandparents. (The older generation in Korea thinks that cash is the best!)

Newlyweds need to buy more thoughtful gifts for parents like red ginseng or premium fruit assortments. (If they’ve just returned from their honeymoon, they need to bring each relative a nice gift.)

Korean Valentine’s Day is a bit different from other countries.

It’s a day when women give chocolate to men (usually girlfriends to boyfriends).

If you’re hot, you’ll receive many boxes of chocolate and be asked out.

It began in Japan, but is very common in Korea.

On White Day, men give candy to women (usually boyfriends to girlfriends) in return.

Just like Valentine’s Day in Korea, pretty girls will get lots of candies.

May is also known as Family Month in Korea. It’s when Koreans can’t save much money.

As you can imagine, children receive toys or dolls on Children’s Day.

They also get to spend time with their parents, usually at the zoo or amusement park.

Instead of Mother’s Day and Father’s Day, Koreans celebrate Parents’ Day at the same time on May 8.

Most kids give carnations to their parents with a letter.

Adults usually give carnations and cash.

I once gave my parents carnations made of gold. I’m planning to buy them a massage chair for their hwangap, as it’s a popular gift for parents.

This might be compensation for the stress we gave them.

Chuseok is like Korean Thanksgiving, except it’s celebrated during the harvest moon.

After Seollal, it’s the second biggest holiday in Korea.

Gifts are nearly identical to those given on Seollal.

A huge marketing success for Lotte in Korea.

People exchange pepero snacks on November 11 since the date looks like pepero sticks (11/11).

Couples usually give each other pepero, but anyone can exchange them regardless of gender or age.

The most important day for young Koreans. This is when they take their college entrance exams.

Parents will usually take their children to eat beef afterwards.

Christmas in Korea is known as 크리스마스 (Christmas) or 성탄절 (seong tan jeol). Koreans spend the time with their significant other instead of family. Think Valentine’s Day with Santa taking the place of Cupid.

Christmas is enjoyed by all, but it’s especially a young person’s holiday.

There’s usually a mad dash to find a boyfriend/girlfriend before Christmas Eve, so single people don’t have to spend it alone (Koreans say they’re spending time with “Kevin” from “Home Alone” or “Harry Potter” when they fail to secure a partner). And their parents will look at them with a bit of disappointment if they’re single.

And of course, couples exchange gifts.

For girlfriends, Korean guys buy jewelry (like a Tiffany pendant and earrings), watches, cosmetics or perfume. Korean girlfriends will say how much you care is what matters, not expensive gifts, but they’ll definitely love it when you buy one for them.

Cake is a must on Christmas, as in western style cake, usually from bakery chains and for some reason, Baskin Robbins. They won the marketing war for Christmas in Korea whereas KFC won in Japan.

No one will take offence if you give them money in Korea, as long as it’s in an envelope.

It’s a common gift for children or parents.

Even at weddings, Koreans give money at the entrance and then receive a meal coupon.

Only close friends give gifts like TVs or rice cookers to newlyweds, sometimes during the hahm ceremony before the wedding.

Anything related to health

Drinking culture is very important in Korea and giving the gift of alcohol is very much OK.

Their preferred brands include Chivas Regal 18 or Ballantine’s 21 Year Old.

Go for Chivas Regal 25 YO or Ballantine’s 30 YO if you really want to impress someone.

These gifts boost social standing and make the receiver feel important. Very useful when you want to gain favor.

As the birthplace of K-Beauty, Koreans pay a lot of attention to grooming.

It’s common to give cosmetics as a present.

Whenever I meet someone in Korea, I end up going to a cafe whether they’re my friends, family or business associates.

It makes sense that coffee coupons are one of the most casual and common gifts.

Most Koreans send coffee coupons for Starbucks through KakaoTalk Gift.

Which app do Koreans use to send gifts?

There are many types of apps in Korea, but the most popular one is the KakaoTalk messenger app.

Since everyone uses the app, it naturally became a platform for giving gifts.

People can choose any gift, purchase it within the app, then send a barcode with a cute card message.

More about online shopping in Korea

Once you receive the gift message, you can either use the barcode at stores like Starbucks, or order the item to be delivered to your address.

Making a great first impression with in-laws is nerve-wracking without cultural differences.

Here are some under $200 dollar gifts that are sure to please:

Gifts for fans of Korean culture

I’ve recommended many language programs to English speakers and the one that works best is Pimsleur.

It simulates conversations with native Korean speakers and provides the structure you need to get fluent in three months. You can try Pimsleur here for free!

Koreans make some versatile and stylish outfits that are sure to turn heads. You can choose from modern hanbok to trendy street wear.

Koreans have a unique take on snacks that leads to some super addictive stuff. They also make for a fun gift (unless someone’s on a diet).

This box has the greatest hits of Korean snacks that’s perfect for a first-timer. Expect salty, sweet and sometimes spicy goodness.

Unlike in western culture, Koreans don’t open a gift right away.

They usually take it home to open it when the giver isn’t around.

When Koreans want to open a gift right away, they politely ask, “may I open this? (열어봐도 괜찮아요?)”.

Another interesting situation is when Koreans get the first paycheck from their first job.

Koreans usually get their first job after graduating college.

And it’s common for Korean parents to pay for everything, including tuition, until they do.

So it became a tradition to buy thermal underwear (내복 or naebok) to show gratitude, even when it’s not winter.

30 years ago, the best gift for parents was “red” thermal underwear due to nylon being developed in the 1960s.

Back then, the easiest color to dye nylon with was red.

Since it looked warm and symbolized health and wealth, it became a must-buy gift.

Now, red thermal underwear can be seen more in comedy shows, and most people buy plain colors like gray or beige.

What are some gifts to give someone who loves Korean culture?

Korean fans, teas, red ginseng, seaweed snacks, ceramics or artwork such as calligraphy are sure to please any fan of Korean culture.

What are some things to avoid when giving gifts to Koreans?

How important are gifts in Korean culture?

Like in most countries, gifts are a key part of socializing in Korea. It’s important to give a gift in return whenever you receive one.

This reciprocity isn’t always one-to-one. A key part of Korean gift culture is known as Naeri Sarang (내리사랑), which roughly translates to “love flowing downstream”. For example, if one of your aunts gave you many gifts as a child, you don’t give her gifts because she’s older (You can still give her a little bit on special occasions). You give gifts to her children instead, starting with celebrations such as doljanchi.

This works the same with sunbae (선배 or senior) and hoobae (후배 or junior). Sunbae traditionally pay for meals when dining with juniors. You don’t buy sunbae meals in return, because they’re older, (make sure to buy a cup of coffee or tea after getting free meals though) but you do so for your hoobae when you get one.

How do you refuse a gift in Korean culture?

The short answer is you don’t (but make sure to pretend to refuse at least once to show good manners). It’s very insulting to the gift giver and will harm or possibly end the relationship.

It’s better to receive gifts with a happy heart and buy them something in return.

Let us know your favorite Korean gift below!