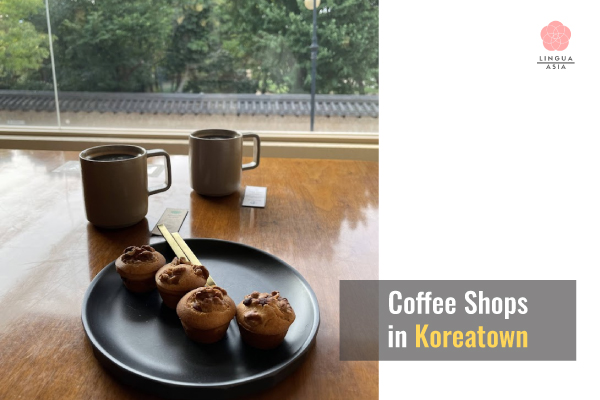 CAFFEINE and SUGAR are what Korean cafes are all about!

There’s a coffee shop on every corner in Korea.

Many of the bigger chains have made their way to the shores of New York, Los Angeles and beyond.

Here are some of the best coffee shops in Koreatown in no particular order.

Korean coffee shop chains are known for having comfortable seats, stylish decor, ultra-fast wi-fi and freezing cold A/C. In other words, they don’t mind if you stay a while. They’re worth a try if you want something new but familiar.

Korean cafes are what you get when you translate something from English to Korean, then back to English. You get some nice things from both worlds.

One of the better Korean coffee chains to make it overseas. They tend to manage them well and keep quality consistent. I’ve been to one in Bangkok and it was a great place to work and relax.

Recommendation 🥰: Tom N Toms signature menu item is its “pretzel🥨”! A pretzel and coffee set will start your day off right.

Don’t let the name put you off. It has some pretty decent coffee and a cute baby angel mascot. What more do you want?

Recommendation 🥰: Angel-in-us signature menu item is “Americcino🥂” (Americano + Cappuccino, which is black coffee with stretched milk). But their “banh mi” is more popular for some reason.

Was once rivaling Starbucks in Korea in number of locations, they got too big for their britches and filed for bankruptcy. They’ve since tightened up their business and focus more on quality over quantity.

That doesn’t stop them from taking risks. They actually set up their first branch in Times Square, instead of a Koreatown with a built-in demographic already familiar with their brand.

You’ll still find locations in most US cities including NYC and LA.

Recommendation 🥰: Caffe Bene “bingsoo🍨 (shaved ice)” has a reputation for deliciousness. They used to have a good “Honey Bread”, brick toast (literally a huge cube of toast) covered with whipped cream and drizzled with honey too. Mmm carb bomb.

King Gojong is the first recorded Korean to drink coffee in 1896. A diplomat offered him a cup while he was hiding from a mob. He loved it so much he helped her open the first coffee shop in the country.

Fun fact, they don’t actually serve baguettes at Paris Baguette stores in Korea. They do abroad though. Go figure.

Good news for you is their bread selection and quality are far better overseas. Paris Baguette cakes may not taste the best, but they sure make em purrty. Rumor has it that their Paris location is pretty legit and has a clean bathroom if you’re visiting the City of Light.

Paris Baguette’s bitter rival in Korea. Have fun by asking a Korean how they pronounce it.

Recommendation 🥰: Similar to Paris Baguette, Tous Les Jours is more like a patisserie than a bakery. Try their pastries!

Another under the category of confusing, somewhat risqué name that makes sense the more you think about it. Don’t feel bad though, because Koreans aren’t really fond of the name either.

Koreans simply call it “Twosome” and you can always find one near bodies of water in trendy areas.

Recommendation 🥰: A Twosome Place is known for its Tiramisu! Their cakes are all pretty good, and strawberry latte🍓 is a must-try!

An Italian brand that became Koreanized and big in the country. Named after the first person to industrialize coffee roasting in Europe, Alberto Pascucci. They have branches in Albania and Malaysia, so if you’re ever in the neighborhood.

Recommendation 🥰: Caffe Pascucci panini is my go-to sandwich before flights. For drinks, granita is so yummm! Pascucci makes it like a smoothie/frappuccino with Gelato on top.

The first coffee shop opened in Sontag Hotel in 1902 by the same diplomat who served the last King of Korea his first espresso. Marie Antoinette Sontag was quite the trailblazer. It was known as a dabang and became a popular place to socialize.

A great stop for when you want some breakfast and/or bingsoo. It helps that the chairs are pretty comfy too.

Recommendation 🥰: If you have a sweet tooth, Vanilla Delight is your drink at Hollys Coffee. With a group of people, snowflake shaved ice🍨 with red beans is almost mandatory to share.

The Korean coffee chain for people who are serious about their coffee and minimalist design. They’re known for doing aggressive product placement (PPL) in K-dramas, but Coffeesmith is not the first choice of most Koreans since it’s a bit pricey.

Fun fact: Korean coffee shops in the US

The third largest coffee chain in Korea that’s about to open its first branch in Guam.

Ediya coffee shops are relatively smaller than others, but guarantee a competitive price.

Mega Coffee, The Liter and The Venti are in an arms race to give you enough caffeine to launch to the moon.

Fortunately, these chains haven’t broken out of Korea to assault you with stimulants. But, they’re biding their time to bring you a liter (33.8 ounces) of coffee for a dollar.

Why are Korean coffee shops worth going to?

What else can I do in K-town besides going to a cafe?

Let us know your thoughts or questions about Koreatown coffee shops!