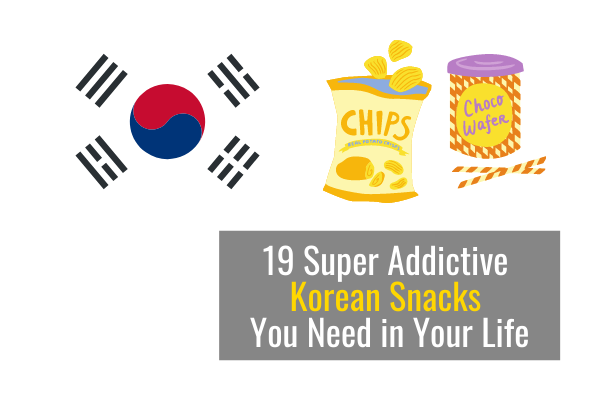 Here are the snacks that Koreans are addicted to.

They’re the ones I grew up eating and crave whenever I’m overseas.

These are the best classic, sweet & salty, ”healthy” and trendy Korean snacks.

Snacks are a way of life in Korea. They’ve spawned black markets and even elections. Now, you can buy Korean snacks online.

Snacks aren’t considered healthy in Korea, but people crave their unique flavors. Read on to see the most popular ones.

These bring back childhood memories with one bite.

A steady-seller for decades that every Korean grows up eating.

It’s also known as the perfect snack for 노래방(Noraebang).

Since Rain’s song, “Gang (pronounced as Kkang)”, went viral, Nongshim hired him as its CF model.

The 깡 (kkang) series is so popular that it spawned sequels.

Thanks to Rain, they surpassed sales of 10 billion KRW in July for the first time.

A cone-shaped snack that you must eat off your fingertips. (Every Korean did this as a kid and sometimes as drunk adults)

I ate this snack as a kid in Korea.

One of the iconic snacks that Koreans of all ages love.

The most popular potato chips in Korea.

Doesn’t sound great in English. But, this one is especially perfect with beer.

Its cuttlefish flavor is addictive, and the peanut inside gives it a nutty crunch.

Ojingeo Ttangkong has been around for 40 years and will probably be forever.

You’ve probably seen this in other countries. It’s a chocolate pie with marshmallow frosting inside.

When teenagers in Korea can’t afford to buy their friends a birthday cake, we stack Choco Pies on a box with candles.

Also, every Korean knows how to make 초코똥 (choco poop) out of Choco Pie. It looks gross but is still tasty.

I loved Kancho in high school. It just looks adorable in its pink box. I always ended up buying them at the school snack shop.

Also, we often wrote letters to each other inside Kancho boxes.

A popular cracker that every Korean mom loves.

My mom always dipped Ace in her coffee much to my amazement, and now I do the same.

As I got older, I slowly grew fond of this cracker.

Sweet & salty is a thing in Korea, and it works somehow.

In late 2014 to early 2015, the “honey butter craze” swept the country. Back then, potato chips only came in salty flavors. Haitai created “sweet and salty (단짠)” using butter and honey.

When it went viral on social media, people were paying a premium to get Honey Butter Chips for 5,000 KRW. They even sold out on legitimate channels and a black market formed to pick up the slack. (Yes, Koreans take their snacks that seriously)

After it became a success, many knockoffs using “honey butter” appeared.

Now it’s not so popular, but people still buy them to have with beer.

It may not sound inviting, but it’s not that fishy and pretty addictive.

It’s said that, “some haven’t tried it yet, but no one has had only one”.

The secret to its sweet and salty taste lies in the corn soup-flavored seasoning.

You can taste the savory sweetness of corn and saltiness at the same time.

Kkobuk is a cute way of saying turtle, since it looks like a turtle shell.

Korean snacks aren’t known for being healthy. Here are some new ones that are (kind of).

The new sheriff in town.

Lotte is doing its best to grow this snack by shooting commercials with Jennie.

Air Baked is also known as “Jennie’s Snack” and sold 4.5 billion KRW worth in just 3 months since June.

It goes well with beer with its crispy texture and salty taste. It may be healthier than other snacks, but don’t expect to lose weight when you eat them.

In 2004, chocolate ‘Cheki’ and green onion ‘Chaka’ were two cartoon candidates in a presidential election for the Chex Choco Empire. Chaka won the election, but Kellogg’s chose to make chocolate Chex.

Koreans, who fought hard for democracy, were playfully furious over the rigged election and demanded their green onion flavor. (yes, this actually happened)

But no one recommended eating them with milk, even though it’s a cereal.

A not so flashy, but consistently popular snack.

I haven’t met a Korean who dislikes Homerun Ball.

My only complaint would be that Haitai is a little stingy with them. The packs are mostly air.

They’re delicious as is, but they’re even better after freezing or frying them in an air fryer.

Small companies are on the rise in Korea. Almond Dark Choco by Mountain and Field is a delicious snack that’s a good example of this trend.

I tried them when they came in the K-quarantine package I got from Cheongju.

Cutting edge snacks that Koreans are talking about now.

It’s trendy and has a cute retro design.

You can buy them at CU convenience stores, but they’re super rare now.

All my friends failed to get them, even after visiting 5 different CU stores.

You may not believe this, but every Korean loves corn!

This ice cream cone is also affordable and offers a lot of value.

It’s sprinkled with nuts and salted caramel syrup on top with visible corn inside the ice cream.

Korean snacks are a force to be reckoned with. Make sure not to eat them too often though.

Let us know your favorite Korean snacks in the comments!