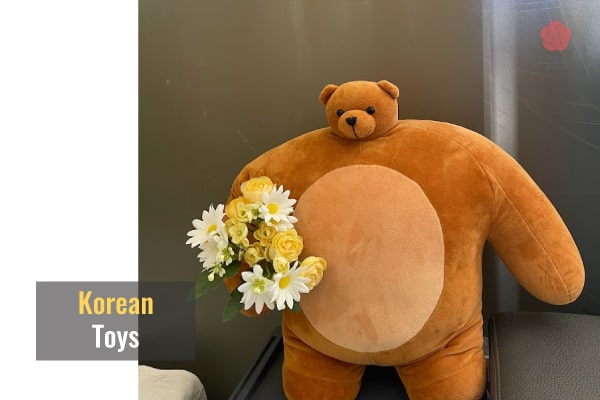 They range from super educational to traditional ones that actually turn into games.

Whether you want your child to experience their heritage or you’re looking for something different, Korean toys are a good choice.

💡 These toys make an amazing gift, for your loved ones or even yourself!

Korea has a long history of simple but fun toys for kids. They were made for/by people who didn’t have a lot to work with when it came to playtime.

People were pretty creative and made some fun games with nothing but pebbles.

Korean kids may have a lot of high-tech toys now, but still enjoy the same games their parents did.

You’ve probably seen this one on Squid Game.

Dalgona is actually a fun (kind of scientific) activity that also turns into a candy for kids. And what better message to send our youth than “science leads to sweets”?!

Of course, this version won’t have the deadly tension of the Netflix show.

Growing up, it was common to see a dalgona vendor on the street across an elementary school.

Korean kids all played it like Squid Game, except when you successfully carve out the shape, the vendor would reward you with an extra dalgona!

In 4th grade, I wanted to kick it up a notch and made it at home, but ended up burning my mom’s ladle. Getting scolded didn’t stop me. I bought a new ladle with my allowance and made dalgona again.

A traditional paengi set includes a wooden top and a stick with a string you whip with to keep things spinning!

There are a few versions of this game.

In the past, locals used to play it on ice during winter. It’s a pretty tough game and requires some skill. You basically flagellate the top to keep it spinning.

Kids played it by themselves for fun, or competed with friends to see who can keep spinning longer.

Things have gotten more violent with the modern version where you knock out other player’s tops. It’s like a hands-on version of Beyblade where you toss the tops using string.

Click the button below to see some cute wooden spinning tops, which are great gifts for kids!

Jegi is a Korean shuttlecock toy.

Jegi Chagi means “jegi kicking” as in a traditional game where a player kicks jegi into the air and tries to keep it there.

Traditional jegi were made by either:

Modern ones are made with a plastic case containing a metal plate inside, and glossy, shredded plastic straps. You can buy this at a stationery store in Korea or in Koreatown.

The goal of jegi chagi is to kick jegi as many times as possible without dropping it.

My baby cousin in third grade always brings his jegi to family gatherings during holidays.

I’d recommend playing with shoes on. I found out the hard way when I bruised my anklebone with one.

Modern gonggi are colorful plastic stones that are about 50 cents a set at stationery stores in Korea.

Gonggi does sound the same as air in Korean, but it means lifting pebbles in this case.

It’s a super fun game that I started playing in elementary school.

How to play: One person goes and everyone takes turns when the player messes up.

Another one from Squid Game!

Ddakji Chigi is a fun game that everyone can enjoy.

The goal is to flip your opponent’s ddakji, and the winner takes that ddakji! Beats getting slapped in the face, unless you lose a super sweet ddakji.

It’s kind of like Korean pogs if you grew up in the 90s.

I used to play it a lot in elementary school and we all made our own equipment. Ddakji made from the cover of encyclopedias or art textbooks were considered the highest quality and a secret weapon in the game.

You can easily make one at home like in the video above or buy one from the link below.

Yut Nori is a Korean board game that’s fun for the entire family during holidays like Seollal.

When I visit my grandparents house, 26 members of my extended family have a blast with this activity.

The best part is that people of all generations can participate and have fun without feeling left out.

Since there are too many people in my family, we team up and play against other teams. There’s always a nice prize for the winners as well!

Yeon is a Korean Kite, and Yeonnalligi is kite flying in Korean.

There’s a record of it being used to signal troops during military operations (as shown in the history drama, The Red Sleeve).

As you might’ve guessed, Korean moms are super into their kids’ education. It’s not surprising to see so many educational toys, even for infants/toddlers to help develop their fine motor skills.

Trick your kids into learning!

Magformers is the king of educational toys in Korea.

They’ll teach your kids things you might not know.

This doljabi toy set is great for celebrating your baby’s first birthday.

You can keep these cute toys after as a memento for that special day.

This adorable book will teach you and your kids everything about Seoul from A to Z.

This cute and informative guidebook makes a nice gift for K-drama fans!

These flashcards are an amazing learning tool for toddlers and preschoolers.

It’s the perfect gift for a baby shower as well!

From kids to adults, most Koreans love plush toys.

Even my brother in his 30s and most of my friends still buy and collect them, especially from Kakao Friends.

Korean toy shop has all the favorites including Pororo, Tayo and Larva.

Coupang has everything including toys.

Let us know your thoughts or questions about Korean toys!