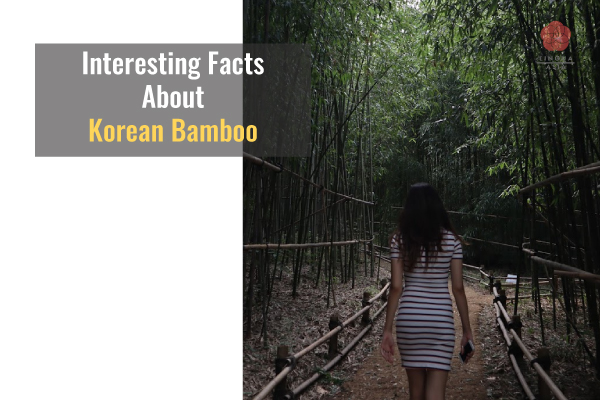 Ever wonder about Korean bamboo?

Probably not, but it’s pretty interesting.

For example, does bamboo grow in South Korea? Yes, it does!

Koreans have been eating bamboo shoots, steaming rice in thick bamboo stems and even making bamboo salt for a while.

We’ve also been using bamboo as a weapon and turning it into a “wife”. Whaa? 🤷‍♀️🤷‍♂️

Read on to find out what I mean.

What is bamboo called in Korean?

Bamboo is called “dae-namu” in Korean.

Despite the “namu” part, which means tree, it’s a plant that’s actually a type of grass, not a tree 🎄.

Since bamboo grows in temperate forests, it’s mostly (about 84%) found in the Southern region like Jeollanam-do and Gyeongsangnam-do.

However, bamboo grows in Seoul now, due to climate change and urbanization.

What does bamboo symbolize in Korea?

Korean bamboo is known as one of the Four Gentlemen: plum, orchid, chrysanthemum and bamboo.

An evergreen, straight-growing bamboo stem symbolizes a person with an upright heart who sticks to their principles.

Also, its hollow stems symbolize a person who doesn’t covet riches and has a clear mind.

What is Korean bamboo salt?

You get purple-colored salt after it goes through the long process of:

It ends up with a slightly sulfurous aroma, so it tastes like a boiled egg yolk with salt.

Believe it or not, joogyeom is said to be healthier since its harmful substances are removed after being heated several times. Active ingredients of bamboo and minerals of sea salt are combined for some serious health benefits.

Koreans mainly use it for cooking or brushing their teeth!

How else do Koreans use bamboo?

Koreans have so many uses for bamboo. Here are a few of the notable ones.

What do bamboo forests mean in Korean culture?

Bamboo Forest (daenamu soop) means a secret place to vent your feelings, and now refers to an anonymous online community.

Most universities, including SNU, have an online community on social media to share concerns, discuss issues and talk about heartfelt stories.

It’s based on the classic story of the King with Donkey’s Ears.

Once upon a time, there was a king with droopy ears like a donkey.
He hired a gat (traditional Korean hat) maker in secret, so he could hide his shame.
The king was happy after, but the hat maker who had to keep the king’s secret got sick from his inner struggles.
He thought he would die either way from sickness or execution for revealing the truth.
So, he went to the bamboo forest in the middle of the night.
He screamed at the top of his lungs, “the king has donkey ears!!!”
The hat maker felt a lot better after. Not so happy news for the king though.
Whenever the wind blew, it carried the sound of “the king has donkey ears” in the bamboo forest and everyone in the country found out.

No word on what happened to the hat maker.

Where can you see Korean bamboo forests?

There are many local parks with bamboo, but the most famous one is Juknokwon (Bamboo Garden) in Damyang.

Let us know your thoughts or questions about Korean bamboo!