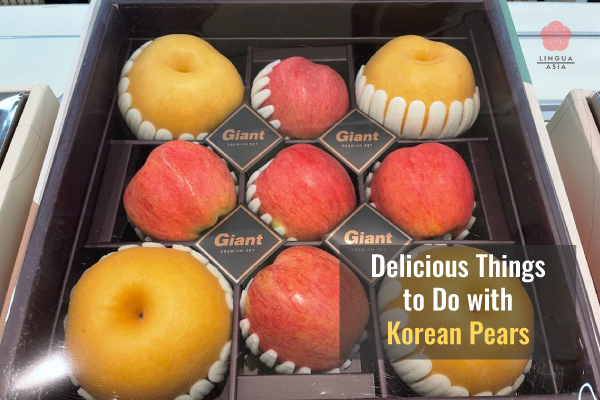 CRISP and JUICY sweetness! You might be surprised how delicious Korean pears can be.

They’re super filling, and actually help curb your appetite. So, they won’t leave you pear-shaped.

Korean pears or bae aren’t the most affordable fruit out there, but are totally worth trying.

Check out how Koreans enjoy pears, along with some awesome recipes and things you might find interesting!

Pears are such a big deal in Korea that the government made a creepy ASMR propaganda video about them.

Seems like a no-brainer, but the best and easiest way to enjoy a Korean pear is eating one straight up!
(Koreans have fruit after every meal, seriously! (❁´◡`❁))

No need to bake or cook it into a dessert, because these golden balls of deliriousness are naturally sweet.

2. Use them in a mouth-watering Bulgogi marinade

It’s kind of a secret, but not for Koreans.

Every Korean mom uses pears in bulgogi marinade, as they add sweetness while tenderizing the meat with protease. It’s like killing two birds with one tasty stone.

Here’s a bulgogi recipe by Tasty from the video above:

If you can’t get fresh Korean pears for your marinade, use pear juice or puree instead. It gives basically the same effect. ^_~

I haven’t met a single Korean person who doesn’t like it.

Just like with bulgogi, adding Korean pears does the trick.

I’ll share a quick and easy recipe from the video above:

4. Have Yukhoe with Korean pear slices

Yukhoe literally means “meat sashimi”. It’s a Korean delicacy that you can find at any wedding buffet in the country.

You must enjoy this savory dish with thin strips of Korean pears! It’s not yukhoe without them.

Kimchi will have a more refreshing/cool taste when Korean pears are added to the seasoning/spices.

Eating a baked/steamed sweet potato (goguma 🍠) with cold dongchimi in winter is just heavenly. It will complete the full Korean experience.

Naengmyeon is THE summer food for Koreans, and literally means “cold noodles”.

It originates from North Korea, and comes in various forms, but the most common categorization would be: Mool naengmyeon in icy-cold broth and spicy Bibim naengmyeon.

Proper naengmyeon should always be garnished with Korean pears.

They also should be used in the broth for that slightly-sweet cold feeling. The last King of Joseon, Gojong, used to love naengmyeon, and his court lady said they made water kimchi full of pears for his broth.

Baesook (or baesuk) is a steamed pear in honey. It’s the perfect dessert that works as a traditional cold medicine in South Korea.

Haitai Crushed Pear Juice has been an institution in Korea since 1996.

It’s popular as a hangover cure, and as a substitute for pear juice when making marinades for Korean meat dishes like bulgogi, galbijjim, etc. It’s a lot cheaper than buying a fresh Korean pear.

TankBoy was launched in 1997 as a freezie (jjujjuba) by Haitai. It’s great for warding off the heat in summer.

TankBoy tastes pretty good, and contains 12% pears and is 95 kcal.

What is a Korean pear?

Korean pears are golden grapefruit-sized orbs of flavor. Koreans have cultivated them over the years to be extra big and juicy. Hwangkeum is a cultivar that’s especially famous for being delicious. Korean pears are a local specialty of Naju, Jeollanam-do.

Pyrus pyrifolia is a species of tree native to East Asia that produces some tasty pears.

Autumn is the Korean pear harvest season. It coincides with the holiday Chuseok, so they’re often present at family gatherings.

How many calories do Korean pears have?

How do I eat Korean pears?

You can simply wash them, and slice them into wedges while removing the core. You may peel the fruit first or not, it’s up to you!

Yes! But serve in moderation. Pear seeds contain trace amounts of cyanide and should be removed before feeding your pet.