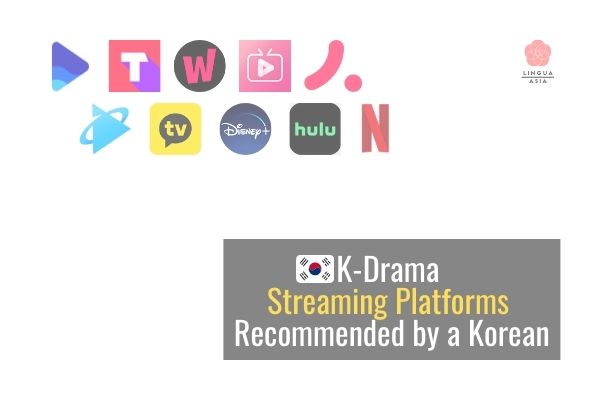 Tired of scrolling to the bottom of Netflix and closing it?

Here are 12 Korean streaming services you might not have heard of!

You can use them to find new Korean dramas, variety shows and movies.

Growing up in Korea with K-dramas always on, the stories seemed formulaic to me. Most featured a love triangle, and followed a Cinderella story where a poor yet pretty girl meets jaebeol. Plus lots of goguma (frustrating) scenes where the mother-in-law is super mean.

Lots of fun the first hundred times or so, but gets old.

Now there’s more variety than ever. I started watching new dramas a few years ago when they’re either recommended by my friends, brother or are highly acclaimed.

My all-time favorites are:

To fully enjoy K-drama moments in a busy modern society (바쁘다 바빠 현대사회), you need OTT (Over The Top: platform or service that allows you stream shows directly from the internet), instead of clearing your evening to watch scheduled TV.

If you thought the streaming wars in the US were heating up, wait til you read about what’s happening in Korea!

Taking the lead of Netflix, HBO Max/Go/Now, Disney+ and many others, Korean streaming services are popping up like mushrooms and running their own Squid Game.

Without further ado, let’s check out 12 Korean streaming services for your K-drama fix!

WAVVE was launched in September 2019 through a memorandum of understanding (MOU) between SK Telecom and the three major national television networks (KBS, MBC and SBS). Like the Avengers of Korean broadcasting conglomerates to fight Thanos (Netflix).

It’s a new integrated OTT service that merged POOQ and oksusu, to keep global OTT companies like YouTube and Netflix in check.

This platform may not be available in your country without VPN.

TVING was launched through a joint venture of CJ ENM and JTBC.

This OTT platform was created to counter WAVVE in early 2020, then was joined by Naver afterwards to maximize the synergy of CJ ENM, which has strength in content planning and production, and Naver, which has numerous webtoon and web novel IPs. Another team up, but mostly of villains. Kind of like Suicide Squad.

Just like WAVVE, it may not be available outside Korea without VPN.

TVING has tons of fun K-dramas based on webtoons like Work Later, Drink Now (술꾼도시여자들) and Yumi’s Cells (유미의 세포들) as well as super addictive Mnet shows like Show Me the Money (쇼미더머니) and Street Woman Fighter (스트릿 우먼 파이터).

WATCHA has a wide selection of classic films, indie movies and TV series that are relatively non-mainstream, compared to Netflix with its blockbuster movies and TV shows. The best part is you can leave user ratings and get recommendations that you’ll actually like (*cough* do better Netflix).

If you want to binge-watch old K-dramas aired in the 2000s as well as entertainment shows and movies, WATCHA is for you. You can view Japanese anime and Hongkong movies too!

Launched in June 2014, U+Mobile TV is sort of a VOD service provided by LG U+ (one of the major Korean mobile network operators). Kind of like if Verizon made a streaming platform, if Verizon also made TVs, computers, refrigerators and a whole bunch of other stuff.

Its name used to be “Uflix (유플릭스)”, a combination of U+ and Netflix, but was changed due to consumer cringe and strongly-worded letters from Netflix. Don’t worry Netflix, we can’t quit you.

You can watch videos on your PC, smartphones, or U+tv, which is the IPTV of LG.

Since this service supports N-Screen (N스크린, a Konglish word for connected experience across several screens/devices), you can continue viewing the same video on another device. It’s also convenient for Koreans since many own LG TVs, use LG(U+) internet and have an LG(U+) mobile data plan. That’s almost too much LG for one household.

U+Mobile TV offers movies and drama series as well as independent films submitted to film festivals around the world. U+Mobile TV has numerous movies that are “free for everyone” without a paid monthly subscription too!

Seezn is an OTT service launched by KT (another major Korean mobile network operator) in November, 2019. It’s upgraded from the previous OTT service of KT, Olleh TV Mobile(올레tv 모바일). Koreans have been watching TV on their phones since early 2000s, so this isn’t such a leap for them.

In August 2021, it was separated as an independent corporation and reorganized as the largest shareholder of Genie Music. Fascinating.

As you might have noticed, Korean companies are overachievers.

Just like its name suggests, Coupang Play is an OTT service provided by Coupang (Korea’s biggest online shopping company). Just like if Amazon made a streaming service…wait.

It’s a free streaming service provided to Coupang’s Wow members. ​It’s practically free since most Koreans have a Wow Membership to get online shopping benefits like free rocket delivery, free returns, special offers, and now free streaming service! They’ll tell you it’s totally worth it if you ask.

You can watch SNL Korea as well as live sports broadcast, including Premier League⚽, La Liga⚽ and even National Football League🏈. It’s a sweet deal because you can enjoy both shopping and watching TV shows!

Launched in June 2015, it was initially a website to replay other TV shows that worked like NaverTV. But, the video content business of KakaoM has expanded since 2019.

Kakao has a bank too for some reason.

With the need for a platform to distribute their original dramas, entertainment shows and movies, KakaoTV was just launched in September 2020.

Imagine if WhatsApp wasn’t owned by Meta, and they started making movies and TV shows, and launched a streaming video service to show them on. That’s kind of what happened.

Kakao is smart. They create really fun content that people want to see just like FACE ID with Lee Hyori. And it’s free as long as you visit KakaoTV frequently!

A streaming service with international roots, so you won’t need a VPN to use it. Viki has been making a marketing push as of late, but most of the good licenses have already been bought up by Netflix.

They have a few shows you can’t find elsewhere, depending on where you live. The platform hosts mainly Chinese Dramas, so if you’re looking for a different experience you can check it out.

You can also watch the latest K-dramas, Ghost Doctor (고스트 닥터), The Red Sleeve (옷소매 붉은 끝동) and Now, We Are Breaking Up (지금, 헤어지는 중입니다) on Viki!
(My friend highly recommended “The Red Sleeve”, and it’s on my list to watch next.)

Disney is a bit late to the K-drama party, but they have deep pockets and aren’t afraid to use them.

They’ve already started production on 5 dramas with big names like Black Pink’s Jisoo and Daniel Kang. Disney+ has plans to go even further with 50 Asia Pacific productions by 2023.

Hulu has some classic titles that are a must for K-drama fans like “Winter Sonata”. It might be worth getting a membership just to binge them.

Similar to Viki, but with more Korean content and Asian horror. AsianCrush seems to making more of a push for originals than Viki. But users tend to complain about slow buffering times. Worth a look if you’re out of ideas and don’t want to use a VPN.

Of course, we have to include Netflix, which is going all in on Korean content.

They’re doing a mostly great job adapting Webtoons and light novels. They’ll continue putting out stuff to watch, so check back with them once in a while.

Let us know your thoughts or questions about Korean streaming platforms in the comments!