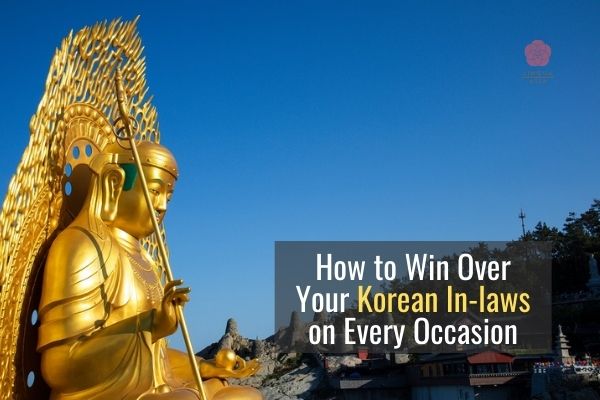 Need help with your Korean in-laws?

Korean in-laws can be stressful at times, but they’re full of jeong and will help you when you need it.

Meeting them can be nerve-racking, so I want to walk you through what to expect in each situation.

What to call your in-laws in Korean?

If you’re a woman:

Korean women also use “시월드 (si-world)”, which is pronounced like “sea world”, to add a bit of negative nuance. They use this when speaking about them to their friends.

There’s a saying in Korea: “사위 사랑은 장모 (sawi sarangeun jangmo)”, which means “mother-in-laws love son-in-laws the most”. On the other hand, if your jangineoreun is a 딸바보 (daughter’s daddy), he might not be too thrilled to see you.

Gay marriage is still illegal in Korea, so there are no official titles.

Situation 1: Meeting your future Korean in-laws for the first time

This will be the most anxious time, because you have no idea what to expect.

Don’t worry though. Your future Korean in-laws will feel awkward and nervous too, since you’re from a different culture. At that point, you’ll most likely have more experience with Koreans than they do with non-Koreans.

Also, in this situation, you’re still girlfriend (여자친구)/boyfriend (남자친구) and the Korean parents should be super nice to you.
(If they’re mean to you in this stage, run! It probably won’t get better unless you save their lives or something equally unlikely.)

Now, let’s go over the basics: how to dress, what to expect and a bonus tip to win their hearts.

If you’re in your early twenties, feel free to wear anything neat or a campus look. Conservative style will be appreciated, but you don’t need to suit up.

If you’re in your thirties or serious about the relationship, office wear or knee-length dresses are safe choices.

If you’re not Korean and speak a little bit of the language, they’ll definitely compliment your Korean ability. (“오~ 한국말 잘하시네요.”)

Younger parents might be different, but they’ll most likely ask about what you do, how old you and your parents are, if you have siblings, etc. Koreans are very blunt and especially older generations go straight to personal questions. In the past, marriage was more strategic than romantic, since times were tough, and finances and status were a matter of life and death.

It’s a great idea to meet with your boyfriend/girlfriend’s siblings together, because they’ll help you by stopping the parents from asking too many questions.

Honestly, if you just say “안녕하세요 (annyeonghaseyo)” and/or “처음 뵙겠습니다 (cheoeum bwepgetseubnida)”, Korean parents will be impressed. This is the sweet spot of Korean language ability as a future son/daughter in-law. Enough to make a good impression, but not too good to have to answer tough questions.

If you’re fluent in Korean, you can answer what they ask, but don’t feel pressured to answer everything. Your partner will probably get nunchi and help you out. You can always say 잘 모르겠어요 (jal morugesseoyo).

I can almost guarantee you that your future Korean in-laws will relay the message through your partner that, “그냥 와도 된다” meaning you can come empty-handed.

It’s smart to get off on the right foot, and the most socially acceptable gifts are:

Sanggyeonrye (상견례) is a formal meeting between the families of the bride and groom before the wedding.

Think of it as an engagement party, except that only you and your fiancé/fiancée’s direct families (usually parents and siblings) meet for the first time to greet each other and discuss wedding details.

Consider it like an important business meeting. Romance, am I right? Make sure to arrive on time and be polite.

Most sanggyeonrye happens at a respectable hanjeongsik (Korean table d’hôte) restaurant with a full-course meal in a private room for lunch/dinner on the weekend.
(The groom’s family usually pays for sanggyeonrye.)

Everybody dresses up for sanggyeonrye in Korea.

Men will wear a suit and tie, and women will opt for formal wear like this beige tweed dress.

Parents will lead the conversation, and compliment each other.

They’ll discuss the wedding location (city) and date. The topics are really up to the parents, but it’s better not to talk about money, brag or be too humble. Not to worry, it’s easier than you think.

The best part of sanggyeonrye is that you can sit tight and enjoy the nice course meal.

Just smile and listen to their conversation. When there is a quiet and awkward moment, you can give your parents and future in-laws a gift you prepared as a couple (or you can give gifts when dessert is served.)

The most common gifts appear to be honeyed bellflower root (도라지 정과) and rice cake (떡케익) decorated as a western cake, but these might not be available if you’re outside Korea.

Alternative gifts can be osulloc tea or red ginseng for both sides of the parents.

Situation 3: Meeting your in-laws after your honeymoon

Koreans have a custom of visiting for a sleepover at the bride’s family first, then the groom’s family after the honeymoon.

Tradition is that the bride’s family prepares wedding food (이바지 ibaji) and sends it to the groom’s family. As it’s a lot of work, some buy “ibaji food”, which costs about 500 to 1,000 USD.

Most people now simplify it and either buy hanwoo (Korean beef), fruit assortments and rice cakes, or just skip it altogether.

Whether you do ibaji food or not, it’s still important to visit both families after the honeymoon.

If families value tradition, it’d be best to wear hanbok for this occasion.

Most families are happy to see you, so you can wear casual, modern hanbok or semi-formal attire. It’s really up to the family’s tradition.

This is a heartwarming occasion, so both sets of parents will be very nice and prepare a feast for you.

They’ll welcome you to the family, and make small talk about the honeymoon, wedding, etc.

You can say “감사합니다 (gamsahabnida)” and “잘 먹겠습니다 (jal meokgetseubnida)” before eating the feast the in-laws prepared. After the meal, mention that it was delicious by saying “맛있어요 (masisseoyo)” and “잘 먹었습니다 (jal meogeotseubnida)”.

They’ll be happy to hear about your trip as well.

Aside from ibaji food, you need to bring your parents and in-laws a gift from the honeymoon.

Before the pandemic, most Korean couples bought a luxury bag/purse for their mom and mother-in-law, or a brand scarf at outlet malls or duty-free shops overseas.

After the pandemic, most get specialty items from their honeymoon destination or still get luxury goods or cosmetics from department stores.

The old tradition is that women cook huge holiday feasts together on the first day, which makes most daughter-in-law (며느리) dislike holidays, while men watch TV. This explains an increase in the divorce rate in Korea after holidays.

However, now it’s more common to see the whole family cooking together. (My dad cooks way better than me.)

For the very first holiday after the marriage, wearing hanbok is highly recommended.

It will definitely score extra points with your Korean in-laws.

Since most Koreans spend a few nights over during holidays, bring extra comfy clothes to change after arrival.

For subsequent holidays, it’s safer to wear a full suit or formal wear, then change into comfy clothes later.

Most young Koreans get stressed during holidays since parents/relatives tend to ask uncomfortable questions and give long lectures.

For students, they’ll be asked how they’re doing at school or what their dreams are. For college students, they’ll be pressured to get a decent job at a conglomerate. People in their late twenties to thirties will be asked when they’ll get married. Once you’re married, they’ll ask when you’re going to have your first child. Then, when you’re going to have the second kid, and how they’re doing at school. This is a never-ending cycle, which was common when I grew up.

Now this is considered kkondae (꼰대) or “boomer”, and socially not as acceptable.

I hope your Korean in-laws don’t do it, but you’ll probably hear some uncomfortable and personal questions. You might hear about the merits of jeonse (전세 key money deposit) vs. wolse (월세 monthly rent) vs. jaga (자가 owning) regardless of your personal situation. The master key expression is “그러게요 (geureogeyo)”, which means oh well, I suppose, I see, I agree, etc. similar to “soudesune” in Japanese.

When you live nearby, Korean in-laws will expect to have a meal together on their birthdays.
(Having meal/bap together is very important in Korean culture.)

You can keep most birthdays casual, except for special ones like hwangap.

Most birthdays are casual, so you can wear anything.

But if you do want some respect from your Korean in-laws, business casual or office wear is recommended.

They’ll most likely make small talk. You can keep it casual as well.

If your Korean in-laws love gardening or decorating the house, I highly recommend a celadon vase.
(Most older Korean parents, especially Korean dads, love Korean orchids or 난, so this vase makes a perfect gift.)

As always, safe choices will be red ginseng, osulloc tea and skincare cosmetics.

There will be more times when you see your Korean in-laws for no specific reason or occasion.

Koreans care about T.P.O. (Time, Place and Occasion) a lot. So, dressing up for the venue will go a long way.

You can say “네, 잘 지내셨어요? (ne, jal jinaesyeosseoyo?)” to ask them the same respectfully. You can compliment your mother-in-law on her accessories or something she’s wearing.

The usual gifts work, but you can tone down the spending here. For casual meetings, your Korean mother-in-law is more likely to bring food or banchan. Hopefully, you enjoy Korean food and this will be a welcome present.

Let us know your thoughts or questions about Korean in-laws in the comments!