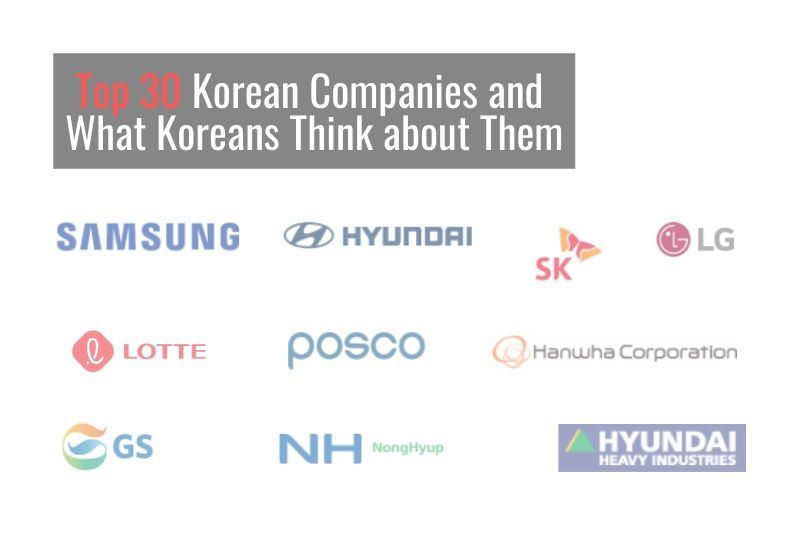 This article gives you an inside look into what Koreans think about them.

Here are the top 30 Korean companies and their 2019 financial status.

The closest word to “Jaebeol” in English would be conglomerate, but there are a few differences.

Like conglomerates, Jaebeol control numerous diversified affiliates, but their authority over them exceeds legal means.

Most are owned and controlled by families.

These families are similar to royal bloodlines with arranged marriages and successions.

This also means the eldest male often runs the show, regardless of merit.

They’re also linked together financially by marriage and loans.

Jaebeol have influence in politics and government as well.

In order to do business in Korea, it’s important to be aware of them as competitors.

The top Korean companies are massive, and go all out when it comes to expansion.

They take “cradle to grave” literally and provide everything from childbirth at their hospitals to funeral services at their funeral homes.

Jaebeol have been both a blessing and curse to South Korea.

Most Koreans are very proud of Samsung.

So much that they sometimes call Korea the “Republic of Samsung”.

What people paid most attention to was him announcing that his children would not succeed him (he has a 20 year-old son and a 16 year-old daughter).

Only time will tell whether Samsung will be managed by the 4th generation or not.

Is Hyundai a Japanese company? No, it’s Korean.

It’s a conglomerate in Korea run by the Chung family.

Chairman Chung Mong-koo succeeded Chung Ju-yung, who started from nothing and became one of the richest men in Korea.

Ulsan is the base of the multinational Hyundai Group, and Koreans nicknamed it the “Republic of Hyundai” or “Hyundai Metropolitan City”.

It’s considered a good place to work as they pay a high salary.

SK is the third largest conglomerate in Korea.

Despite what some people think, SK stands for Sunkyong, not South Korea.

Started as Sunkyong Textile in 1953, the cornerstone of this group is energy & chemicals.

It has a somewhat positive reputation in Korea as it doesn’t do anything exceptionally well or poorly.

Formaly Goldstar, LG is a Korean conglomerate run by the Koo family.

LG is also known for smooth successions without bloody battles between family members, thanks to its strict management training.

Its tagline is “Life’s Good“.

LG is especially famous among netizens.

The reason being, LG makes good products, but their marketing team doesn’t always get the word out, so netizens promote LG products for them.

A conglomerate with controversy over its nationality (due to Korea’s history as a colony of Japan).

It’s the only company headquartered in Japan among the top 10 Korean conglomerates.

As you can imagine, Koreans tend to have mixed feelings about this.

Their marketing team seems to be doing its job, because most Japanese people consider it a domestic company.

Lotte was founded by Shin Kyuk-ho, a Korean Japanese person, in 1948.

Then, he expanded his business to Korea with Lotte Confectionery in 1967.

Shin Kyuk-ho used to manage the conglomerate by spending odd numbered months in Korea and even months in Japan.

His legacy was to build a 123-floor building, Lotte World Tower, which Koreans often call the “Tower of Sauron”.

Launched in 1968 with the mission of national industrialization.

It was the first integrated steel mill in Korea.

Posco has grown to produce 41 million tons of crude steel a year.

It’s also a global business with production and sales in 53 countries.

Their reputation is pretty solid in Korea.

Parents would be proud if their children work there.

Founder Kim Chong-hee was nicknamed “Dynamite Kim” by the US military for his hot temper during the Korean War.

And things haven’t changed much since.

One example of him being overly passionate was:

Kim Chong-hee suddenly died at the age of 58 in 1981 with no successor planned.

There was a dispute between the brothers Kim Seung-yeon and Kim Ho-yeon.

The first son Kim Seung-yeon took over at the age of 29.

But the dispute went on for ten years and ended with Kim Ho-yeon taking Binggrae.

His first son is currently the vice president of Hanwha Q Cells and considered to be the third generation successor.

Unlike his gangster father, addict brother, and other street fighter brother, he’s never caused a problem.

Despite the fact that they own the 63 Building, formerly the tallest in Korea, they continue to maintain their gangster image.

GS Group is a Korean conglomerate.

GS Holdings was incorporated in 2004 and officially split from LG Group in 2005.

The Koo family has full control over LG Group and the Huh family runs GS Holdings.

GS has a relatively clean image among Koreans.

They even have their own chain of convenience stores.

NongHyup became one of the top 10 conglomerate groups in 2010.

In the decades since, NACF has played an important role in the growth of the Korean economy.

In 2012, NACF started separate operations for its NongHyup Financial and NongHyup Agri-business groups.

NongHyup has a larger presence outside of Seoul given its agricultural roots.

Most people who live away from the capital do their banking with them.

Hyundai is so big, it made this list twice.

Hyundai Heavy Industries is one of the largest shipbuilding companies in the world.

Headquartered in Ulsan, Hyundai Heavy Industries was founded by Chung Ju-yung in 1972.

Guided conversation is the fastest way to get fluent in Korean. Pimsleur takes you from 0 to conversational in 3 months. You can try Pimsleur here for free!

In Korea, we take for granted how much they affect our daily lives. I didn’t realize how much they controlled the Korean economy until I went overseas.

It’s possible for independent businesses and startups to be successful in Korea, provided they have a strong competitive advantage that cannot be replicated.

Thank you for reading.