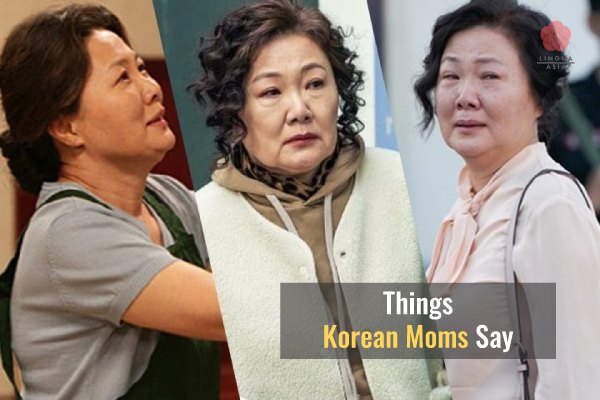 Korean moms are some of the most quotable people on the planet.

Whether you want to understand yours or are just curious about “umma” featured in K-dramas, we’re here to decode their unique language and behavior.

Here are 10 things they say and do that you might have noticed.

What do Koreans call their mom?

Young kids say “umma (or eomma)” and grown-up children use “omoni (or eomeoni)“.

Omoni feels a bit too formal and distant, so it’s often used when referring to a mother-in-law or by a super polite kid.

For some reason, Korean moms always wake you up 30 minutes earlier than the alarm.

It’s probably because they’re worried you won’t be on time for school or work, but you’ll end up begging, “Let me sleep five more minutes ⏰!”

I actually found a solution to this recently. I just wake up at 5 AM before my parents get up. 🤣

Korean moms scream to the top of their lungs every morning, saying “Bap (rice or meal/food) is ready. Come and eat”.

When you leave the sanctuary of your room, you’ll only find an empty table and umma in the middle of cooking.

I know this doesn’t make any sense, but let’s try to understand that your Korean mom just wants to feed you warm food.

They believe that dairy products can last well over a week, and things in the freezer will never go bad.

When these don’t get eaten by you, they’ll end up on your father’s plate.

📌 Similarly, umma never throw away anything after it expires. I had to dump all the expired shampoos, conditioners, soaps at my parent’s house much to their chagrin.

Korean moms urge you to eat more veggie banchan, not just the meat ones.

It doesn’t matter whether you just had a mouthful of greens.

She will still go ahead and put a lot of vegetables on top of your rice bowl, whether you like it or not.

Likewise, I’m not a big fan of seafood, and yet my mom still tries to feed me it all the time.

Let’s take a deep breath here and not get irritated. It’s a sign of their love and that they care about you.

5. Phones are the devil

As soon as you decide, ‘Okay, I’ll stop looking at my phone and start studying now’, your Korean mom spots the moment like a tiger that never misses its prey.

She won’t give you any time to explain, but will unload the nagging bomb with, “Stop checking your phone. When will you study?”

In their defense, they want a better future for you, and being book smart is the only way they know to be successful back in Korea.

Bonus Round: Korean Moms to Daughters

When you’re 0-27 years old, Korean moms will be like: “Never date a guy, and don’t even think about staying out overnight.”

Korean moms believe that if you whistle at night, a ghost or snake will appear. 👻🐍

It sounds so random, but it’s because of the strangeness and high pitch that whistling makes.

Another reason is that snake hunters in the old days used to whistle to charm their prey.

If you’re still not sure why they say this, imagine that dark spooky vibe at night during the 19-20th century as shown in historic K-dramas. Spooky.

7. “Never stand on a doorsill or in a threshold”

Koreans believe that when you stand in a threshold, your luck will run away.

According to the local custom, a doorsill or threshold is considered the boundary between this world and the otherworld (or this life and afterlife, 이승과 저승). So, Korean moms warn you not to touch them carelessly.

8. “Shake your legs, shake off your luck”

Korean moms/dads and grandmas/grandpas all hate it when someone shakes their leg.

It just got me curious, so I looked up the origin story. The folk tale goes like this:

The rich man thanks the physiognomist and treats him very generously.

Well, there you have it. Keep your legs in check!

9. “Don’t trim your fingernails or toenails at night”

After school or work, you gotta trim your nails when you can, like in the evening, right?

They’ll still tell you not to.

I happened to know why and it’s based on a cute superstition in Korea.

When you trim your nails at night, a rat will secretly eat them. The next day, the rat turns into you and walks around pretending to be you. 🐭😉 And we can’t have that.

You probably heard this a lot from Korean parents. 🐮

This one is also based on an old nursery story.

Once upon a time, there was a lazy kid/guy who always ate and lied down right after.
His family and friends told him he would become a cow if he kept doing so.
The lazy guy said it would be nicer to live a leisurely life as a cow grazing on grass.

One day, an old passerby gave him a cow-shaped mask and told him he could become a cow if he wore it.
The lazy guy thought it was a good idea and he turned into a cow as soon as he put it on.
He freaked out and struggled, but the old man quickly put a leash on him.

The old man sold him as a cow to a farmer at the market, and said, “Whip this cow a lot because it’s lazy. Also, never feed it radishes because it will die.”
The cow worked all day every day while getting whipped.
Life was so painful; he wanted to just end it and saw a radish.
Remembering what the old man said about dying, the cow ate it.

Magically, he returned to his human form.
He went back home and lived a very diligent life after learning his lesson.

And that’s why you never eat and lie down kids.

Let us know your thoughts or questions about Korean moms or umma!