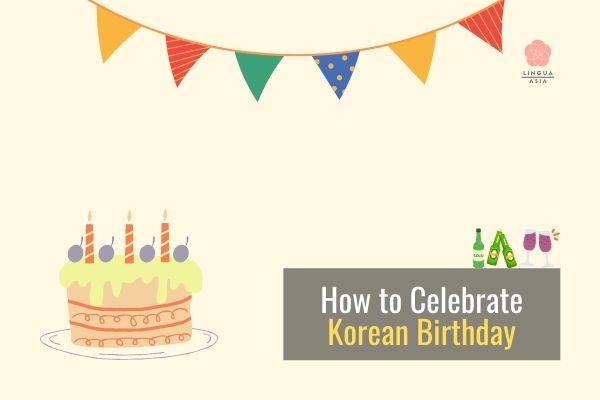 Seaweed soup, all-nighters and some playful violence (or theatrical romance), Koreans celebrate their birthdays with a twist.

Birthday parties are loads of fun in Korea. Here’s how we celebrate them.

It depends on the company and age of participants.

Like a typical night out in Korea, birthday parties will span a couple venues and may last until the sun comes up (especially when you’re in your 20s).

They’ll start at a restaurant, then hop over to a pub with a cake from a bakery. Many places are starting to ban outside cakes, but they’re often allowed. Non-Koreans who run restaurants or bars really seem to hate this culture and some put up no cake signs like no smoking signs. You can always call ahead to see if they’re welcome.

This continues to a bar/pub, noraebang, club and maybe even a pojangmacha.

For those in their 30s, Koreans hang out with friends on the birthday weekend. We prefer a nicer restaurant like omakase or pasta place. Then, we hop over to a cafe that sells cake or an upscale cocktail or wine bar.

40s and above won’t usually party all night and keep it to 11 or 12 PM. But, there are still some ajeossi and ajumma who go hard.

Low-key birthdays are common among middle/high school students. Choco pie cakes and small parties are the norm and big elaborate sweet sixteens are unheard of. Kids are too busy studying. When someone’s birthday overlaps midterms or finals, they’ll actually wait until after to celebrate. My birthday is during midterms, so it kind of happened later.

Couples will celebrate at romantic venues. Young guys sometimes set up elaborate events with balloons, singing and champagne. They also do a surprise visit to give their gf/bf a birthday gift through an “event (이벤트)” at school or their house.

Most Korean couples in their 20s to 30s will buy expensive gifts on the birthdays of significant others, usually brand jewelry or fashion items.

When their birthdays are close to each other, Korean couples love a birthday trip/retreat to a nice pension(펜션) or pool villa or hokangseu (호캉스) in Korea.

Married couples will go to a western restaurant and have wine. Korean husbands love it when they get a PlayStation or anything game-related on their birthdays, while Korean wives enjoy a romantic night-out and a designer purse. You don’t have to go all out on spending, my dad still buys a flower bouquet for my mom on her birthday.

This is where tradition shines through.

Korean families highly value having breakfast or dinner together, which of course must include seaweed soup and a cake.

I used to get a different gift from my family each year, but since I turned 20, we’ve been keeping it simple by sending cash to each other. I try to mix it up, I buy my mom cosmetics and my dad golf-related items. My brother prefers cash though.

If you want to impress your in-laws, cook seaweed soup for them. But, don’t set a pace you can’t keep. For example, avoid cooking seaweed soup during the first year of marriage, or your mother-in-law will expect it every year.

1. How important are birthdays in Korea?

Koreans make a big deal about birthdays, especially the first and 60th ones!

People in Korea fixate on age, since certain milestones should be reached at a specific age according to society. And the fact that Korean age is 1 or 2 years higher than international age makes people think they’re old all the time here. (You’ll often hear a 25-year-old Korean saying she/he’s too old! Whaaa… 🙀)

Anyway, the younger they are, the more meaning they find in their birthdays in South Korea.

Old Koreans call birthday as “귀 빠진 날“, which literally means “the day the ears fell/pulled out“. Its origin is unclear, but some believe that the moment when the baby’s head and ears come out is the most difficult, and that’s considered the birthday or birth moment in Korea.

2. How do you say happy birthday in Korean?

How you wish elders and friends happy birthday in Korean is different.

To elders, parents/grandparents or in-laws:

To friends, bf/gf or husband/wife:

3. How do you sing the happy birthday song in Korean?

It’s basically the same happy birthday song you know, except with Korean lyrics!

When you go to a Korean bar or pub on your birthday with your friends, they’ll even play a loud birthday song for you!

Other customers will happily clap and wish you happy birthday as well.

The common manner/etiquette is sharing your cake with them after to show appreciation.

The version they play at a bar is a bit more rock and roll than you’d expect. It’s actually based on a Cliff Richard’s song called Congratulations. You might even get the Turbo version which is techno to the max.

Koreans tend to celebrate birthdays at restaurants and will bring cakes. They usually buy birthday cakes from Paris Baguette or Tous Les Jours, and sometimes from a gourmet cakery. Some come in cupcake form, so they can be shared easily.

The trend in Korea now is to add customized lettering (레터링) on a cake or label topper (라벨형 토퍼).

For grandparents or in-laws, 떡케이크 (ddeok cake or rice-cake cake) is a popular choice.

Korean friends have “생일빵“, which is same as “Birthday Punch” where a friend runs up to someone and punches him/her on their birthday. This only happens while they’re students, and most people grow out of it. Some mischievous ones even throw cake at a friend’s face. That’s why Korean cake boxes have a warning that says “do not throw” as it contains a support pin. Choose violence on birthdays responsibly.

As a Korean woman, I normally get birthday gifts like Dior Addict Lip Glow, Miss Dior Perfumed Hair Mist, hand creams by L’Occitane or Aesop from my female friends, and Starbucks drinks and cakes from male friends.

However, Korean couples will spend a lot more on each other’s birthdays.

You can also get some birthday gift ideas from our previous posts: 17 Korean Gift Ideas for each Holiday and Occasion & 25 One-of-a-kind Korean Gifts You Can Buy Right Now.

6. What is Korean birthday soup?

Korean birthday traditions are having a bowl of “seaweed soup (미역국 or mee-yeok-gook)” with pan-fried fish, bulgogi or galbi, and namul!

After giving birth, Korean women eat seaweed soup every day as it’s rich in iodine, calcium and antioxidants, believed to be beneficial during the postpartum period.

Having seaweed soup on birthdays is to remember gratitude every year by eating the same food your mother ate after giving birth.

Regardless of the custom, I love seaweed soup for its taste, health benefits and how easy it is to cook! (You just need to fry beef cubes in sesame oil, add seaweed, then water; bring it to boil and add a bit of soy sauce.)

Korean birthday soup is a family thing. You don’t cook this for your friends.

You’ll also find japchae (잡채), which is a complex noodle stir-fry dish that can be served hot or cold.

7. How do you write a birthday card in Korean?

Birthday cards are becoming less common since most Koreans send KakaoTalk messages. But, they’d be happy to get one since a physical card has extra sentiment.

You can of course write a birthday card in English, but you’ll really impress a Korean if you sprinkle in a few sentences in their language!

Common sentences in a casual tone to add are:

Who pays for the birthday party in Korea?

This is a simple question that has a complex answer. Traditionally, the birthday boy or girl (20s and older) would pay for the party. But, now nunchi is required.

If the birthday boy or girl receives a lot of gifts from friends or feels super happy, they can pay for the first venue which is usually a restaurant. Most friends split the bill, and rich ones pay for the entire thing.

Let us know your thoughts or questions about Korean birthday in the comments!