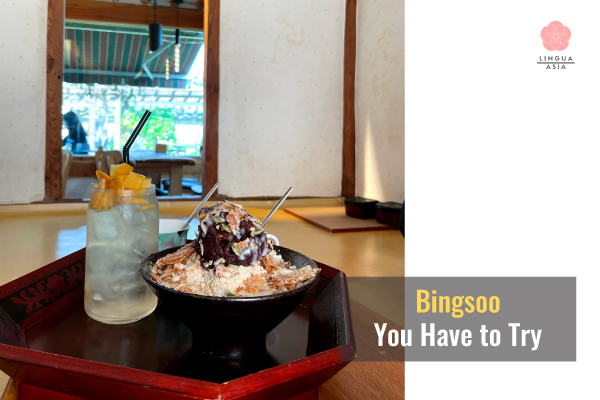 Bingsoo are a traditional Korean dessert with some pretty cool modern takes on it.

Here are some bingsoo that made me stop and say, woah!

I also cover some super-secret ways Koreans enjoy the heck out of them.

The CLASSIC bingsoo that started it all.

It usually comes with milk to pour over the dessert, unless the base itself is milk-shaved ice.

Patbingsoo is just perfect in summer with the cold properties of pat (red bean), which bring down body temperature and have a diuretic effect. It’s science, from Asia!

An authentic patbingsoo artist will use home-made red bean that’s not overly sweet (they boil red bean with a bit of sugar, salt and water). You can always tell if it’s canned red bean because of the tooth-hurting sweetness.

📌Tip! Avoid mixing it too much as the ice will melt quicker. Since bingsoo is meant for sharing, stir it a few times with an unused spoon or simply eat it as is. Also, it can be a low calorie dessert with homemade red beans, instead of the canned ones.

Mango is considered a fancy fruit in South Korea. Most hotels and café chains have an apple mango bingsoo on their menu.

Surprisingly, sweet apple mango and rich cheesecake cubes go well on bingsoo! Who would have guessed?

If you’re on a diet, it would better to avoid mango bingsoo due to its high calories and sugar. Koreans often say that all the delicious things are 0 calorie. If only. 〒▽〒

📌Tip! Save mango syrup for later. After eating half your mango bingsoo, pour the syrup to maintain the flavor of mango paradise. You can totally skip the syrup when you’re dieting.

Before we get into Injeolmi Bingsoo, “Injeolmi” is a Korean rice cake sprinkled with roasted soy bean powder that has a perfect nutty flavor.

Injeolmi Bingsoo is super popular with everyone of all ages. (If you’re not sure what to order, get this one.)

📌Tip! Just like tiramisu (where you need to be careful not to inhale cocoa powder), the same rule applies to Injeolmi Bingsoo. I’d recommend either holding your breath while swallowing, or mixing in roasted soy bean powder with shaved ice to avoid choking and coughing.

Strawberry bingsoo is the winter treat from South Korea you didn’t know you needed!

Whether it’s a franchise or a small family business, pretty much every café will sell strawberry bingsoo in winter. It’s almost the law. Fun fact, there’s even strawberry buffets at fancy hotels in Korea.

📌Tip! Go with the toppings you like. If you prefer a simple strawberry flavor, get a fresh strawberry (saeng ttalgi) bingsoo. If not, ones with mixed fruits are pretty yummm.

I LOVE green tea bingsoo! Although it sounds like detox food, it’s a guilty pleasure with its ample calories 😋.

Whenever I’m fully caffeinated but end up at a café, I get green tea latte or bingsoo.

📌Tip! Just like Injeolmi Bingsoo, it’s sprinkled with a lot of powder. Be careful not to inhale while chowing down.

I normally order it to impress someone who’s never been to a Korean bingsoo café.

Its flavor is for everyone, so this is definitely a safe choice, unlike “mint chocolate (min-cho or 민초)” that people either love or hate.

As it often contains yogurt ice cream and cheesecake cubes inside, it should work if everyone is lactose tolerant.

📌Tip! Hold the tiny flag on top and slice the melon to eat the fruit like a pro. Scarf down the ice dessert part, then pour condensed milk over the remaining bingsoo when it’s about halfway done.

The Americanized version of Bingsoo, approved by Koreans!

Full disclosure, my goal was to introduce general bingsoo you can try at any café in koreatown.

But boy did I have to include this. It’s like an explosion of sweetness, topped with Oreo, whipped cream and chocolate powder! And that’s not all (drum roll please🥁). It even has secret vanilla ice cream inside.

I think this is the ultimate dessert that kids dream about, and some adults. *ahem

📌Tip! Get this one when you’re low on sugar or drunk. Pour condensed milk to make it sweeter and yummier. Just remember not to think about the calories, hence the low sugar level or intoxication.

Tiramisu bingsoo usually has a milk shaved ice base and comes with a shot of espresso to pour over later.

📌Tip! After finishing tiramisu, pour an espresso shot over the bingsoo. Be careful not to choke on tiramisu cocoa powder. I can’t stress this enough!

Heugimja means black sesame in Korean and locals often eat it as porridge. Heugimja salad dressing is heavenly as well with its amazing nutty flavor!

Many Korean cafes started selling heugimja lattes since they go well with milk and are super healthy.

Now they have a bingsoo version!

If you want to try something more Korean Korean, check this out as it has red bean, heugimja (black sesame), mochi with a scoop of vanilla ice cream.

📌Tip! There’s a natural sweet note from the red bean, but feel free to add condensed milk to enjoy it as a dessert. Also, check your teeth after for seeds, especially on a date!

There’s no need to say more (mal-mo-mal-mo) about chocolate. Am I right? ლ(╹◡╹ლ)

If you’re a chocolate fan, try this one. It has a mixture of brownie cubes, chocolate cookies, whipped cream, chocolate powder and chocolate syrup drizzled on top of bingsoo. Almost too much chocolate!

📌Tip! Although condensed milk looks overkill, it is necessary after finishing the toppings. You’ll taste different levels of sweetness while destroying your belt line.

Bingsoo or bingsu are seasonal dessert that have been popular since at least the Joseon Dynasty (1392-1897).

Koreans used to grind ice for a base, but now shave it for finer and smoother texture (this is called snowy bingsoo).

Shaved ice or milk is placed into a serving bowl, then toppings are added.

It’s perfect in summer, but great throughout the year.

A must-have ingredient is ground/shaved ice whether it’s ice-ice or frozen milk.

Anything goes in the modern version.

When is the best time to eat Bingoo?

Summer is a great time to eat bingsoo.

But just like how Koreans believe eating ice cream is tastier on a freezing winter day, bingsoo has the same effect.

I’d also recommend getting bingsoo to sober up after a night-out with your friends (✿◕‿◕✿).

How many calories does Bingsoo have?

It depends on what’s on it. Traditional bingsoo aren’t very high-calorie and actually are quite healthy.

Something with mango, chocolate or ice cream will increase the calorie count.

How do I eat Bingsoo?

Some Koreans prefer to mix all the ingredients, but some prefer to scoop it and eat as is. (It also differs depending on the bingsoo type.)

I honestly don’t mind either way (bingsoo is always delightful to me), so I use noonchi to match the group I’m with.

How do I make Bingsoo?

You can grind or shave ice and add any toppings to your liking. That’s it!

Feel free to get some ideas or inspirations from the top 10 bingsoo I recommended in this post. ლ(╹◡╹ლ)

What is a Bingsoo machine?

You can use anything that shaves ice.

There’s a retro version that you grind ice with by hand, and a modern one that automatically does it.

Where can I eat Bingsoo?

A Koreatown near you is a good place to start looking. Now that the dessert is trendy, you never know where you can find it.