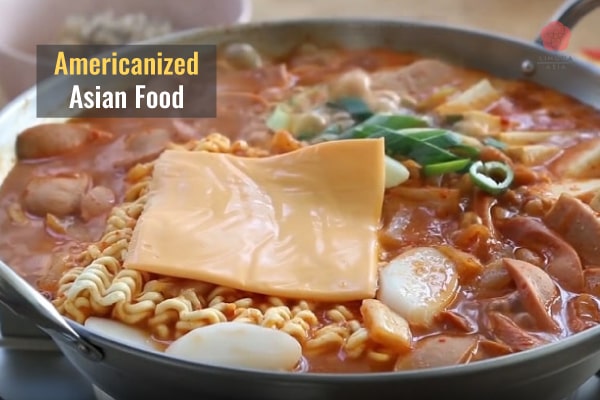 All food is fusion if you go back far enough.

From Americanized-Asian to Asianized-American, here are some fun examples of Korean, Japanese, Thai and Chinese dishes with a dash of liberty!

Localizing dishes has been a thing since bread was invented.

I love seeing different examples around the world, especially what locals think Americans eat (looking at you “American Fried Rice” in Thailand).

But you don’t have to look far. Most foreign food in the states has been Americanized to a degree.

You may have had a sneaking suspicion that the “California Roll” isn’t an authentic Japanese dish.

Guess what, you were right!

Doesn’t change the fact that they’re delicious and nutritious.

As a Cali boy born and raised, these will always be a guilty-pleasure.

What can I say? They got me young.

It’s said that these were invented in Los Angeles at L.A.’s Tokyo Kaikan restaurant, one of the country’s first sushi bars.

This was a different time when sushi chefs from Japan were trying to gain a foothold in America during the late 1960s/early 1970s.

They created the “inside out” roll that hid the nori (seaweed) under the rice and substituted toro (raw fatty tuna) for avocado to appeal to American preferences and perhaps to save costs.

The avocado-crab-cucumber roll became such a hit that sushi conquered the country.

I sometimes enjoy ordering one of these at a restaurant in Japan for that look of confusion/disgust.

I just hope they start making a Tsukiji burger with uni and seaweed in Japan for revenge.

Legend has it that when Yao Ming first came to Miami to play basketball, the Heat handed out fortune cookies in the arena.

A bold move that could have backfired.

Luckily, he had no idea what they were, since it was his first time seeing them.

They were actually invented in the states.

Makoto Hagiwara of Golden Gate Park’s Japanese Tea Garden in San Francisco was the first to serve the version of the cookie (based on a Japanese snack) we know and love today in the 1890s or early 1900s.

So it seems that the iconic cookie is neither Chinese or American.

They were then mass produced in Oakland and the rest is history.

ABC (American-born Chinese) dishes are looked down upon by purists, but bastardizing Chinese food is a global pastime.

My favorite example is Korean-Chinese food which is just so wrong it’s right.

OK, so this one is actually based on a Japanese cooking technique from the 1600s of the same name.

Back then teriyaki meant broiling fish with soy sauce, mirin and sugar.

It was just kicked up a notch in Hawaii by Japanese immigrants in the 1900s looking to recreate dishes from home.

They mixed local ingredients such as pineapple juice and brown sugar with soy sauce and used it as a marinade.

The original sauce was intended for fish, but with the abundance of poultry and beef in the land of liberty, they traded up.

It still took another few decades and the help of Kikkoman promoting soy sauce beyond the Japanese-American community in 1957 to make it a hit all over the continent.

Then Junki Yoshida, a Kyoto immigrant to Seattle, started giving out samples of his mother’s recipe for teriyaki in supermarkets.

4. Pretty much everything you eat at a Chinese restaurant back home

Every red-blooded American is familiar with ABC (American-born Chinese) cuisine. I sometimes miss these dishes when I’m overseas.

Funny story, in China, they view these Chinese-American dishes as simply “American Food”.

If you want the real deal, you need to go to a Chinese restaurant on the top floor with no English menu. If it looks like an elaborate marital arts fight is about to break out, you’re in the right place.

Or, just go to the non-touristy part of Chinatown.

Now we’re going to cross the Pacific and get into some American-inspired Asian dishes.

A sad story or a tale of triumph against adversity, depending on how you look at it.

They were so desperate for food, they put leftovers from the US Army like Spam into Kimchi stew.

Koreans ran with it and now you can find Budae jjigae chain restaurants all over the country.

Needless to say, I was thrilled to discover this when I first moved to Korea. I felt like it was made for me.

Budae jjigae is the second-best hangover cure after Ppyeo haejangguk in my opinion.

For when you can’t be bothered to lift each french fry to your mouth.

Korean corn dogs answer the question of how can you take something naughty and make it naughtier?

Adding cheese, sugar and wrapping it in french fries of course.

How did we get here?

Myungrang Hot Dog in Busan recently kicked off the trend where corn dogs have become a delicious Frankenstein’s Monster. They use flour, sticky rice flour and yeast to make the dough for a nice chewy texture.

Another entry that came to be thanks to the U.S. Army.

Rumor has it that troops from the Southern states brought the recipe to Koreans, who promptly made it sweeter and spicier.

Now Korean fried chicken is a serious business in the country with many retirees opening up their own restaurant.

I used to eat this once a week with beer of course (치맥, chi-maek) much to the chagrin of my waistline.

The best brand in Korea is Gyeonga Doo Mari from Cheongju in my opinion.

Moon pies have been big down south for over 100 years and are kind of a proto-smore with marshmallow fluff tucked between two graham crackers.

They were created in Tennessee during the great depression to pack in the calories. Moon Pies evolved to be covered in chocolate and contain cake instead of crackers.

Tongyang Confectionery (Orion) created the Choco Pie after one of their development technicians sampled a similar sweet sold in an American hotel in Korea.

Now, it’s an iconic snack all over the Peninsula. Koreans grow up eating Choco Pies (it’s kind of like their Hershey’s Chocolate), then guys fall in love with it once again during military service.

Eventually, North Koreans first experienced the snack in the factory city of Kaesong.

Choco Pies are so huge in North Korea that they’re the first thing a defector asked for when he made it south.

South Korea even sent 10,000 up North by air balloon as a form of snack diplomacy.

If you like Choco Pies and ever make it to Korea, get the PNB version in Jeonju. They’re fresher and made with better ingredients.

A dish with two origin stories.

A chef at a restaurant created it for American troops outside Korat (Nakhon Ratchasima Province) during the Vietnam War.

The owner of an airport restaurant made it from leftover eggs, bacon, hotdogs and fried rice from a canceled flight in the 1950s.

Either way, this dish has taken off since then and made it full circle back to the shores of the USA.

I’ve been visiting Thailand for fifteen years, but never noticed this one until it became popular on the internet. I didn’t think American Fried Rice was a thing until my friend in the states asked about it.

I found it soon after at a random restaurant. I guess I had to see it to believe it.

Now I notice it more and more. Baader–Meinhof phenomenon in action.

Thais can make anything taste good, so this dish isn’t half bad.

Omelet filled with rice, covered with ketchup and cheese? We’re gonna go ahead and say it’s American, even though it was invented in Japan. *wink

A portmanteau of “omelette” and “rice”, this one is said to have been invented to quickly feed hotel staff in Ginza.

It’s not my favorite dish, but it’s great for breakfast or lunch when you want to be full but not comatose.