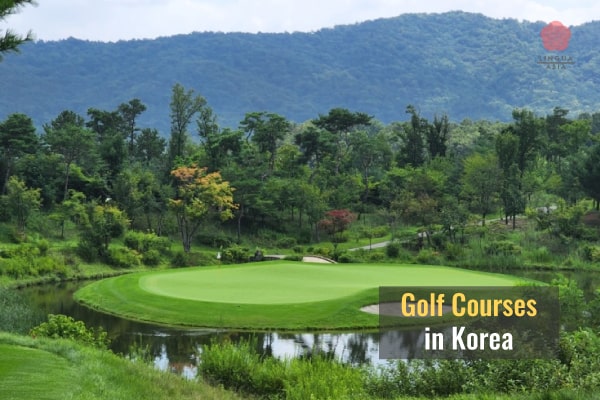 From high-powered execs to gen Z slackers, everyone golfs in Korea.

It’s no longer just a rich man’s sport since there are more affordable options like public courses.

Here are the best golf courses for some tee time in Korea.

In case you haven’t noticed, Koreans play some golf.

Korean female golfers have occupied the top spot in global competition for years.

There are tons of options when it comes to the sport. Here are the main ones:

You have three main choices when it comes to playing golf. Screen golf, driving range and course, or field as they say in country.

Screen golf is a fun activity to do with friends. You can order beer and get sloppy in a controlled environment.

It’s like they took the golf section of Dave & Buster’s and fed it growth hormones. Screen golf is a great way to start a night out since you can do it early in the evening.

Driving range is pretty much what you’d expect, except for the giant green net that surrounds the area. Space is limited in Korea, so it’s cheaper for them to rope off the area so to speak. Koreans call it “golf practice/training place”.

Golfing on a course is an entirely different animal.

People take it pretty seriously. They pay a few hundred dollars to play after all.

Things have changed slightly when it became trendy among the MZ generation during the pandemic.

You’ll also see the latest in golf wear. You might think you stumbled onto a golf fashion show. You’ll even see people using “golf patches” on their faces to block UV rays.

Like most things in Korea, the pace is pretty lively. You won’t have that much time to stop and enjoy the scenery.

Quick tips for golfing in Korea

Golfing used to be very expensive in Korea, now there are more affordable options

Bring your own clubs, balls and gear from home if you can. Golfing equipment is way more expensive in Korea from what you’re used to.

Scottish-highland-inspired course on a volcanic island?

Nine Bridges was built in 2001 and ranked as one of the top 100 golf courses in the world by Golf Magazine.

This members-only, 18-hole course is worth every penny.

While it may fall a bit short of the designer’s idea of a Scottish Highland, it’s a championship-level course with breathtaking ocean views.

It features cottages, a villa, swimming pool, spa, and tons of facilities for a good after-round experience.

This is the best course in Korea if you can make it out to Jeju.

Don’t be fooled by the name, Ananti Club Seoul is actually in Gapyeong.

This 18-hole, 73-par challenging course is known for its fast greens and narrow fairways.

No worries if you get lost in the rough, because the beautiful wooded hills and water features will take your mind of things.

The good news is that you can book a round online even if you aren’t a member.

Jack Nicklaus Golf Club Korea is one of the official courses around the world created by the legend himself.

With 18 meticulously designed holes, this 72-par course in Songdo is a golfer’s dream.

The course features a gauntlet of water hazards in the form of ponds and lakes that are easy on the eyes.

Lakeside Country Club in Yongin is known for its relaxing atmosphere and friendly staff.

It has both public and members-only courses, which are 18 and 36 holes respectively.

The grounds themselves are visually-pleasing with a lake and rivers that flank the courses.

There are 18 holes for members and prices vary by day.

If you’re not that into valleys and prefer hills, you can check out Seowon Hills next door.

A quieter course located in Gangwon-do near Sorak mountain, Pine Ridge Resort is great for a relaxing weekend getaway.

Unlike some of the entries on this list, it’s very accessible to the public. You don’t need to be a jaebol to play.

It has 27 holes set in a tranquil pine forest for you to enjoy. The course itself was filled in 40,000 tons of Elvan sand, which I’m assuming is a good thing, and features scenic views of the East Sea.

There’s a class of golf course so private and exclusive that their websites don’t even work.

How do you make a reservation you may wonder? If you have to ask, then you probably can’t.

More about business trips to Korea

Wellington Country Club fits this bill to a tee.

Located in Icheon (not to be confused with Incheon where the airport is), Wellington CC is the most prestigious in Korea.

Built in 2013, it’s also one of the newest golf courses on this list.

Its three 9-hole circuits are immaculate, but good luck getting a tee time.

Once considered the most exclusive course in Korea, Anyang Country Club is the other entry on this list that you probably can’t use.

It’s invitation only, so it’ll be tough to score a reservation.

Of course they have a golf course in North Korea.

Rumor has it that Kim Jong-Il scored 5 holes in one on it in one game. Sounds a bit like Al Bundy scoring 4 touchdowns in in one game at Polk High.

After dismantling the joint South and North Korean Kumgang Ananti Golf and Spa Resort near Mount Kumgang on the country’s east coast, Pyeongyang is the only one left.