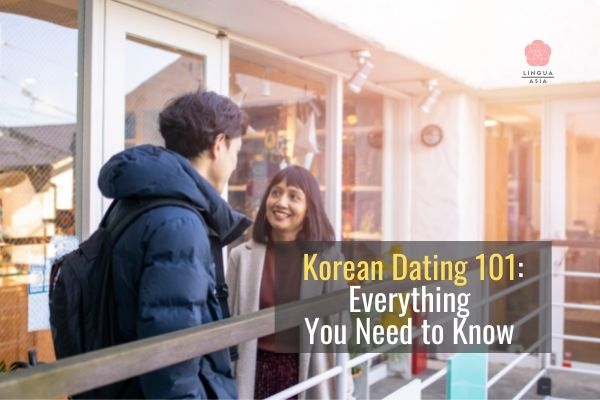 Looking to date someone in Korea?

Dating a Korean is a fun and sometimes frustrating experience for expats. It helps to know the cultural norms to avoid major mistakes.

Read on for everything you need to know about dating in Korea!

Where do you meet someone in Korea?

Like most things in the country, meeting someone can be either super easy or hard in South Korea.

It can happen naturally if you’re going to school or working at a company here, because you’ll get plenty of chances without even trying.

Korean universities or companies host numerous events such as orientation, retreats, team building workshops and get-togethers where you can meet someone new or start a romantic relationship.

Other places where you can meet someone are:

The types of blind dates in Korea include:

There’s a Konglish word, “CC”, which stands for Campus Couple.

Despite the many advantages like you get to spend a lot of time together, it’s good to be careful being CC since it can ruin your other relationships or reputation. It will be also uncomfortable seeing that person if you happen to breakup. Most Koreans recommend CC, but with someone from another major or club, instead of the same major, so you can avoid them if necessary.

Not all Koreans want to date foreigners due to cultural differences and fear/prejudice. From my experience, probably only 10 percent are really interested.

For men, consider trying things that women traditionally do such as singing and dancing. Asking for a girl’s number on the street will automatically flag you as a player in their mind, unless there’s a reason to contact each other. A good friend of mine accidentally bumped into a girl on the subway. They’re now happily married.

For women, think about gaming or sports clubs. Western women are considered exotic and liberal in Korea. You’ll have to feel out the situation carefully if you’re looking for something serious.

Language exchange is always a safe choice to start testing the waters, because the people there are open-minded enough to want to improve their English skills. And, in the worst case you can improve your Korean!

What do Koreans do on a date?

The standard dating course is a restaurant (mostly Italian or Western style) then a cafe, plus something extra like watching a movie, taking photos at studios or booths, etc.

When either the boyfriend or girlfriend has their own place, they hang out and cook at home.

However, most Koreans live with their parents until they get married or move to another city for school/work. In order to get some privacy, couples go to a motel (A.K.A. love motel) where they can stay for a few hours (15-20 USD) or overnight (50 USD).

For celebrations or anniversaries, Korean couples go on a 2 or 3-day trip to Gangwon-do, Jeju Island or Busan. Before COVID-19, they used to go overseas together as well.

This is where your uniqueness can shine through. Take locals to non-Korean locales that mainly expats know about. If you don’t know any, join a FB group for local foreign restaurants and events. There are tons of interesting places in Seoul like sheep cafes, archery cafes and gaming rooms where you can do something different.

Who pays for the dates in Korea?

Men pay initially for meals, then women pay for coffee if they like the guy.

Buying coffee is more of a nice gesture. If your Korean girlfriend doesn’t appreciate or pay for anything at all, maybe you should take this into consideration and think before furthering your relationship.

“Dutch Pay (더치페이)” or splitting the bill is also common later on, but still, men pay more for the dates in Korea.

Some couples open a joint account to save together and use that money to pay for their dates and trips.

It really depends on the couple.

This aspect of dating in Korea is like 20 years in the past in western countries. Men are expected to pay for most things while women are supposed to let them choose the place and sometimes the dishes. Not everyone in Korea likes this and you can find people more on your wavelength, depending on what you’re looking for.

“Some (썸)” is a relatively new term from 2014 that originates from “something” or “there is something between us” and it’s one of the best parts of Korean dating. It’s the stage when you get to know each other and flirt before committing to a relationship.

The some (썸) period ranges from a few days to a month. After that one-month expiration date, it’s not gonna work.

Some (썸)-related Korean words are:

The initial dating phase should be light and fun. But, don’t be surprised if your partner ghosts you out of the blue. This is considered a somewhat normal way to end the dating phase in Korea. There are over 10 million people in Seoul and people often have a few irons in the fire so to speak.

I wouldn’t take it too personally and just meet someone else.

How do Koreans start an official relationship?

Unlike western culture where you naturally (or slowly) get into a relationship, Koreans get it done, just like their fast culture of “빨리빨리 (ppalli ppalli or hurry hurry)”.

Men usually ask women to officially date them by saying “사귀자 (sagwija)” in Korean. It’s called “고백 (goback) or confess one’s love”. This confession happens within one month of the “some or 썸” stage.

To help you know when to start a serious relationship with a Korean, the signs of a “green light (그린라이트)” are

BTW, the worst ways to confess your love in Korea are through phone call or text message, while you’re drunk, or in public (especially in a lecture room in front of hundreds of people or in front of someone’s workplace).

It’s OK to not follow the local custom here. Koreans watch a lot of western movies and TV shows, so they have an idea that things are different. They won’t expect you to know this part and if they do, you’ll have bigger problems with cultural differences in the future. They’ll generally ask “what’s our relationship?” if they’re interested in dating you.

How often do Korean couples text each other?

They’re glued to their phones and text through KakaoTalk. It can be suffocating, but it’s their culture.

Most couples also spend hours talking on the phone until they fall asleep, so there’s 커플 요금제 (phone plans for couples), allowing unlimited phone calls and messages between them.

When frequent texting becomes less and sporadic over time, Korean girlfriends will say “oppa, you’re changed (오빠 변했어)”. If you don’t want to hear this, it’s better to limit the frequency of texting from day 1.

Text and call as often as you’re comfortable with from the beginning. It’s OK to adjust a bit to local customs, but never set a pace you can’t keep.

Are public displays of affection (PDA) okay in Korea?

Yes and no, PDA in Korea really depends on the neighborhood and time. If it’s at night on a bar street full of young people, it’s considered okay. Whereas if it’s during the day in a local neighborhood full of old people, you’ll get some stares.

In general, light PDA is acceptable, such as holding hands, hugging or kissing on the cheek. If you want more than that, there are love motels for a reason.

How do you say “I love you” in Korean?

You might be surprised, but Koreans say “I love you” pretty quickly.

What do Korean couples celebrate?

Young couples up to high school even celebrate their 22nd-day anniversary, which is called “투투 or two-two”. I don’t know about now, but they used to collect 200 or 2,000 won (0.2 to 2 dollars) from their friends.

Of course, they also celebrate birthdays, valentine’s day, white day, pepero day, Christmas, and so on.

What gifts do Korean couples give each other?

Everything and anything. I’ve seen everything from T-shirts, Nike shoes to luxury designer bags, wallets, cosmetics and jewelry. Even rings! Koreans call it “couple ring or 커플링”, which doesn’t mean engagement or marriage, but symbolizes their relationship.

Gift prices between couples in Korea can vary from fifty to thousands of dollars.
(It’s pretty common to see a friend getting a 2,000 dollar Chaumet necklace for her birthday from her boyfriend. Some even end up paying monthly installments for an ex-girlfriend’s LV bag.)

A Korean girlfriend will usually hint what she wants to get for a specific anniversary or birthday. You can choose wisely depending on your budget.

The worst anniversary gifts for Korean boyfriends are 1. handwritten letters 2. books and 3. health supplements. Anything other than these will be great!

They also buy “couple item” or matching pairs of anything to celebrate their anniversary.

Dating in Korea can be great for those who enjoy giving and receiving presents. No worries if you’re not that into spending money or feeling obligated. There are people in Korea who are like-minded, you’ll just have to spend more time finding them.

What’s a “couple item” in Korea?

Not everyone, but many Korean couples like to have “couple items (커플템 couple-tem)”. Most try it when they’re young and grow out of it, and some stick to it.

They wear couple items to make their relationship obvious and potentially block other people from approaching their boyfriend/girlfriend.

Is it hard to date in Korea?

It’s about the same as anywhere else. However, as a foreigner, there are advantages and disadvantages to dating in Korea. On the one hand, there will be cultural differences, but also you’ll have the advantage of being exotic and rare to locals. Also, you may be considered their get-out-of-Korea-card.

Do Korean couples live together before marriage?

Not usually, but this is becoming more common. They all say they want to try living together, but they don’t due to social pressure or nunchi.

Not as much as in most western countries, but holding hands and hugging are socially acceptable.

How do Koreans view international couples?

It depends on the person. Most will see them as a novelty and some will either look down on or envy them. That being said, younger people are more open to dating non-Koreans or supportive when their friends date or marry them. On the other hand, some old people on the street may stare, but you can ignore this.

Let us know your thoughts or questions about Korean dating culture in the comments!