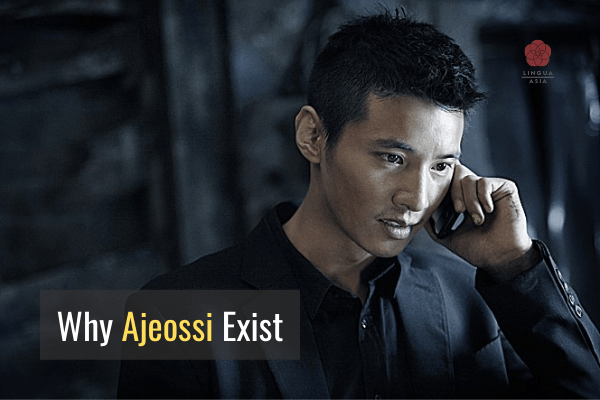 Want to know what’s going on with ajeossi?

Find out what it means and how to spot one!

Korean has two iconic titles for men and women when they reach middle age. They are:

Read on to find out more.

They all mean the same thing, but “ajeossi” is the correct spelling according to romanization rules.

We’ll stick with ajeossi in this article.

What does ajeossi mean in Korean?

Ajeossi (아저씨) means a “middle-aged man, mister or old man”, and can be used by anyone.

It was originally a term referring to “male relatives” who are one generation older, such as 삼촌 (samchon or uncle), 오촌 (ochon or your parent’s cousin), or distant relatives.

In the past, ajeossi was used for men who didn’t have a high social status, so they weren’t too thrilled to hear it. People with high status/ranking especially had unpleasant reactions when addressed as such (they would get pissed off).

Over time, men gradually stopped minding being called ajeossi, since Korea got rid of its class-based society.

Even though most mandatory soldiers are in their early 20s, soldiers (군인 or goonin) are often called goonin ajeossi (군인 아저씨), because most Koreans grow up calling them ajeossi through letters.

[FYI, Korea has a weemun pyeonji (위문편지 or consolatory letter) system where lower grades of elementary school students are told to write letters to soldiers to cheer them up. The kids don’t know their names, so they simply address the letters to “goonin ajeossi”. Just like most at university, I was sad to see my friends join the army at 20-21 years of age, and realized they’re young kids, not ajeossi.]

Summary
Ajeossi is a middle-aged man in his 40s-50s, usually married with kids.
Young children often consider men in their mid-20s as ajeossi.
You may not believe it, but there are many Korean teenagers who have been called ajeossi due to their old look (노안 or noan, the opposite of 동안 or a younger look).
Just like ajumma, most young men aren’t happy to be addressed as ajeossi.

How can I spot an ajeossi?

They’ll often congregate at park pavilions or coffee shops during the day when they’re not in the office, and any manner of places that serve alcohol at night.

Like ajumma, they also enjoy wearing vivid hiking clothes, even when they’re not hiking, or golf wear. The upscale ones will wear a suit in the style that was popular when they graduated university. They’ll often smoke and engage in heavy consumption of soju and/or magkeolli.

There are different levels of ajeossi. Some will eat shin ramyun for lunch at Gimbab Cheonguk and get haircuts at Blue Club (the Supercuts of Korea), while some are fancier and will drink wine or hard liquor, but don’t be fooled, the core principles are the same.

If you aren’t sure if someone’s an ajeossi, just mention that you are unmarried/childless and see what they say. You’ll know what I’m talking about.

How do I get along with ajeossi?

It’s quite easy, listen to their unsolicited advice and agree with all of it.

If you really want to score points, buy them a bottle of Ballentines 30 year or some nice golf equipment. Some don’t drink and some don’t golf, but most do both.

You’ll have a guardian ajeossi for life.

Most are fine and keep to themselves, but you generally remember the ones who got drunk and told you to get married/lose weight/have kids on a plane then passed out.

To be fair, most people aren’t on their best behavior when stressed and overworked.

All Korean men have mandatory military service. Here they will most likely take up smoking and learn to unconditionally respect those with a higher rank. Every generation of Korean men thinks that the following one has it easier, since military discipline has softened over the years along with the length of service decreasing (from 36 months in 1953 to 18 months).

This extends into company life as Korean corporate culture follows a similar rigid, top-down hierarchy. The older generations were bossed around and forced to work horrendous hours. Up until the early 2000s, men would work seven days a week. So, when they get promoted they feel like they’ve paid their dues, and its their turn to do the bossing around. This often leads to toxic work environments rife for abuse.

Business in Korea is relationship-based so ajeossi need to spend long hours drinking and socializing after work to stay relevant. They also consider themselves as a package deal with their boss and underlings. This is called their “line” and it’s important to preserve these life-long relations. Whole lines often get fired to make way for the new ones when the CEO of a company changes.

To top it off, they’re expected to be the breadwinner for the family, which puts a lot of pressure on them. This is changing slowly in Seoul as more women enter the workplace.

Most exist in a state of constant sleep deprivation and stress with a mild to severe hangover. After years of this lifestyle, men naturally become the stereotypical ajeossi we all know and love. This is known as kkondae (꼰대).

How do you refer to ajeossi without offending them?

Although Koreans use the word, “ajeossi” frequently, we tend to use it when referring to them with others and not directly to their face.

Hearing ajeossi has a less psychological impact than ajumma, but still, it’s better to use other titles if possible.

Ajeossi want to hear oppa, but most women probably don’t want to call them that. The next best thing is to simply call them “samchon” because it sounds younger and friendlier.

At a school or hagwon

If you’re a teacher in Korea and need to have a parent-teacher conference, (although it’s rare to see a father) you can call an ajeossi, “oo 아버님 (student’s name + abeonim)“, meaning someone’s father.

Synopsis: Tae-sik (Won Bin) is a former special agent and widower, who runs a pawnshop and lives alone.
The only people he interacts with are pawnshop customers and a young girl next door, So-mi (Kim Sae-ron).
The young girl he befriends gets kidnapped by a drug gang, and Tae-sik rushes to save her.

I remember watching this movie in 2010 and it was pretty good. The actor, Won Bin, perfectly played the role of an awesome ajeossi that can exist only in one’s fantasies. This fun movie is available on Netflix.

Synopsis: In a cold modern society, Dong-hoon (Lee Sun-kyun) and his two brothers (all ajeossi) have been beaten down by life, and Ji-an (Lee Ji-eun (IU)) hasn’t had it easy either. They develop a sense of kinship and find warmth from each other.

Many of my Korean friends recommended this K-drama, saying it’s their 인생작 (insaengjak or a well-made drama that will last a lifetime). I currently finished two episodes on Netflix, and it’s pretty good so far!

What does ajeossi and ajumma mean?

Yes, some ajeossi can be rude. The stereotypical ajeossi smokes cigarettes, drinks a lot and tries to give advice, even when you didn’t ask for it (mostly along the lines of “get married and have kids”). These types are considered kkondae (꼰대 or condescending person), so not every ajeossi is like this. There are a lot of stylish, cool and respectable ajeossi too, they’re just overshadowed by the ajeossi who tells you to work harder or smokes next to you without giving any personal space.

When kids say ajeossi, it’s socially acceptable and not insulting. But, it can be an insult if adults refer to a young man directly that way. However, calling a young man “ajeossi” has less psychological damage than calling young woman “ajumma”.

How do I deal with taxi ajeossi?

Ajeossi are usually in their 40s-50s, but it really depends on how they look and behave. Here are some fun ajeossi tests:

After drinking together, oppa collects money to split the bill; ajeossi argues that he’s going to pay; and halbae (gramps) simply uses a toothpick.

What is uncle in the Korean language?

You can call older males you don’t know in public, ajeossi (아저씨) or samchon (삼촌), if you want to get on their good side.

Let us know your thoughts on ajeossi in the comments!