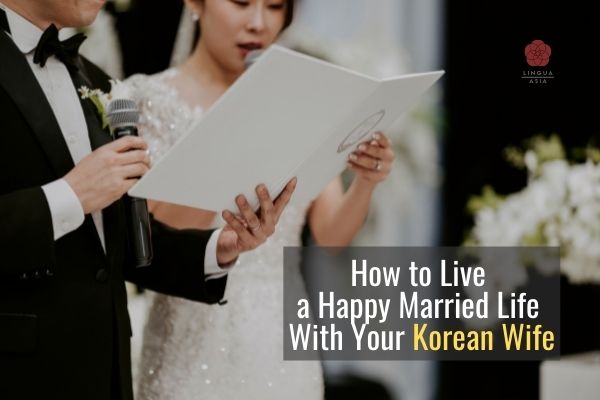 Want to have a good relationship with your Korean wife?

Living a happy married life can be challenging, even with someone from the same culture.

I’m writing this post to help you get along with your Korean spouse. 🙂

What do you call your wife in Korean?

🚫Avoid calling her “야 (ya)”, because it sounds like you’re picking a fight. (It’s okay to say “ya” if you’re being playful with smile. For example, when you’re play fighting.)

More basic Korean words and phrases you need to know

Other helpful spouse-related Korean words are:

What are the pros and cons of having a Korean wife?

Everybody is different. This is merely a generalization of Korean wives to give you an idea of what to expect. Experiences will vary depending on how westernized she is and her personality.

What are their expectations?

In general, Korean wives expect you to be sweet, express affection, converse more, and be family-oriented.

Deep down inside, they want you to be successful and make a lot of money, so they can enjoy that social status.

In Korea, it’s common for a married couple to merge all their assets and the wife takes full control over the family finances. So, your Korean wife might expect to manage all your money and give you an allowance. However, this tradition is changing and more couples choose to split living costs and keep their own money.

What do they fear?

I think the biggest fear of a Korean wife is becoming a divorcee, because of how Korean society views divorce.

It’s no longer surprising to see divorcees around me in Korea and it’s better to end an unhappy, miserable marriage, but Koreans are still afraid of getting divorced.

Korean wives, like most women, are afraid of their husbands cheating on them at work.

I’ve heard from a few friends that there are so many “office wife/husband” relationships happening.

불륜 (bullyoon or adultery) is becoming more common in Korea, as it was depicted in the K-drama, “The World of the Married (부부의 세계)”.

How to communicate better with your Korean wife

It’s important to try to understand what she wants to say and be patient.

Keep in mind that there’s a language barrier as English is not her mother tongue. On top of that, it can be frustrating since Korean women don’t really tell you what they want (they expect you to just get it without saying it).

If you really don’t understand what she wants, simply ask her, or ask her to choose between two options.

How to apologize to your Korean wife

If you caused an argument, you can apologize by saying “잘못했어 (jalmothaessuh)”, which means “I was wrong”.

What do Korean married couples celebrate?

Most couples celebrate by going to a nice restaurant and having steak or pasta. They also like to travel, celebrating their wedding anniversary.

Korean married couples also celebrate each other’s birthdays and Christmas. You don’t always have to buy something expensive, but make sure to set reminders on your phone to show you care.

If you want to really impress your Korean wife without spending much money on a regular day, make her “tteokbokki (떡볶이)”, which is soul food for almost every Korean woman. Just remember that tteokbokki will be a perfect surprise gift for a non-special day. Ditto for sweets and desserts she likes. These will especially go a long way during her period.

I’ve seen my friends who are Korean wives being very happy after receiving Tiffany and Co. accessories or LV bags on their wedding anniversary.

Other common anniversary gifts are: necklaces, flower bouquets and cash (you might be surprised but she’ll like cash!)

You can get her a subscription to a streaming service that has K-dramas, if you want to keep her busy for a while.

Another option is to go on a short trip and shift the focus to non-material gifts. Koreans are enjoying travel more and more these days. You just might have to take lots of pics for her Instagram. Also, learning how to take nice pictures of her is a free way to score points.

Let us know your thoughts or questions about Korean wives in the comments!