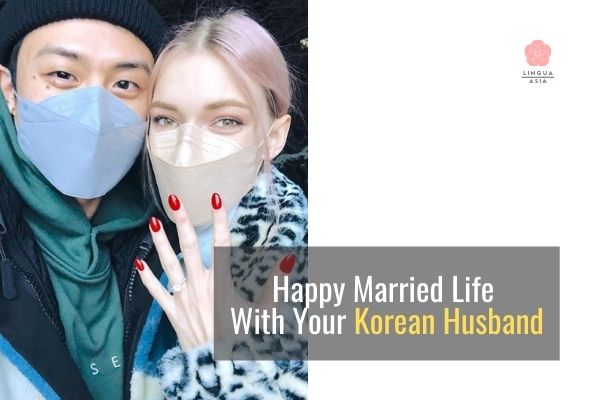 Want to know more about your Korean husband?

Being married takes a lot of work, even with someone from the same culture.

What do you call your husband in Korean?

The Korean title for husband is “남편 (nampyeon)”. “신랑 (shillang)” is also used, but mostly refers to newlywed husbands or grooms.

🚫Avoid calling your husband “야 (ya)”, because it may shock or upset him. (It’s OK to say “ya” when you’re joking around.)

More basic Korean words and phrases you need to know

Other helpful spouse-related Korean words are:

What are the pros and cons of having a Korean husband?

⚠️This is just a generalization of Korean husbands to give you an idea of what to expect. Experiences will vary depending on his personality and how westernized he is.

What are their expectations?

In general, Korean husbands expect you to do more housework, whether you have a job or not. I’m not sure if it’s because their income tends to be higher, at least in Korea. Also, they expect you to raise children perfectly without their involvement so much.

In Seoul and metropolitan areas, most married couples have double income to afford the high living costs. Whereas in the countryside, most Korean husbands make money while wives quit their jobs before/after the wedding and focus on domestic duties.

Korean men expect their wives to be nice to their parents, as in calling them frequently to ask how they’re doing, and meeting them on every occasion like birthdays, Christmas, holidays, etc.

What do they fear?

Korean husbands are afraid of losing their jobs and being unable to fulfil their duty of providing for their family. This would diminish their self-esteem and they’d lose 체면 (chemyeon or face).

A close second be their wives finding out about their secret PlayStation.

How to communicate better with your Korean husband

Creating a nice ambiance for more conversations will be helpful.

Try to have a glass of wine with him, or a bowl of makgeoli (막걸리) with pajeon on a rainy day.

Also, treat your Korean husband as if you’re coding. They need a specific “input” to yield an “output”. For example, if you need him to clean the house, you can tell him, “please vacuum by 2 PM”.

When you want a specific gift for your anniversary or birthday, telling him exactly which item you want will help a lot.

Just like any other relationship, being nice and empathetic with each other will often lead to a happy marriage!

How to apologize to your Korean husband

Though most Korean husbands seem to apologize first, when you want to step up and be the first to do so, you can always say “미안해 (mianhae)”.

Most Korean husbands are forgiving, and they’ll accept your apology.

If you caused an argument, you can apologize by saying “잘못했어 (jalmothaessuh)”, which means “I was wrong”. Most men will be very happy if you do this occasionally.

What do Korean married couples celebrate?

Most couples celebrate by going to a nice western restaurant. They also like to travel, especially for their wedding anniversary or hokangseu.

Like most people around the world, Korean married couples celebrate each other’s birthdays and Christmas.

If you want to make your husband happy, tell him he doesn’t have to make a big deal out of these holidays.

Gift ideas for your Korean husband

If you want to make your Korean hubby happy on a rainy day, try making 파전 (pajeon or Korean pancake) and buy a bottle of 막걸리 (makgeoli) from a store. He’ll be glad to share that Korean sentiment with you and really appreciate it.

For special occasions like a wedding anniversary, your Korean husband will be thrilled to get a PlayStation, Apple Watch, branded clothes like sweaters, etc. But to be honest between you and me, Korean women rarely buy their husbands gifts even though they receive a lot, so anything you get will make him happy!

Another option is to go to a nice restaurant for dinner or travel somewhere. You can find trendy cafes and restaurants. Popular travel destinations in Korea now are: Gangwon-do, Jeju and Busan!

The best gift you can give your Korean husband is to not focus on money. He’s most likely working hard and trying to get promoted. Instead, you can listen to his problems at work and empathize sometimes to show that you’re on his side.

Let us know your thoughts or questions about Korean husbands in the comments!

2 thoughts on “How to Understand Your Korean Husband: the Secret to a Happy Marriage”