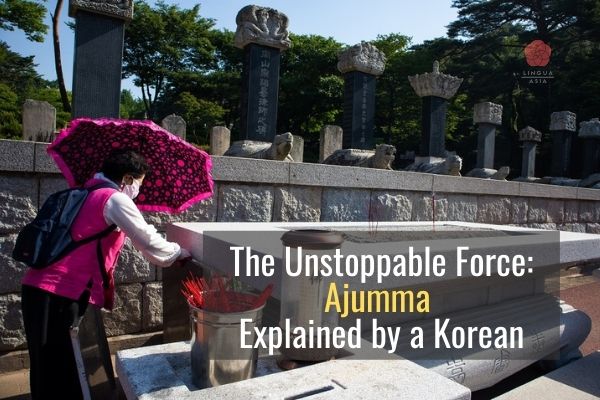 After surviving war, dictators and economic collapse, ajumma are fresh out of hoots to give.

If you’ve been jostled by one at a grocery store, you know what I mean.

Find out the origin of the word and how to spot one here!

Korea went from feudalism to modern day capitalism in a little over 100 years. There’s a big difference in how older and younger generations think and behave. Korean society has changed so much in so little time.

Korean has two iconic titles for middle-aged men and women. They are:

Read on to find out more.

Ajumma vs. Ajoomma vs. Ahjumma

They all mean the same thing, but “ajumma” is the correct spelling according to romanization rules.

For the purpose of this article, we’ll use the word ajumma, since it’s more common and correct.

What does ajumma mean in Korean?

Ajumma (아줌마) means a “middle-aged woman, ma’am or madam”, and can be used by anyone, but with caution.

It originates from “ajumeoni (아주머니)” to refer “female relatives” who are one generation older, such as 숙모 (sukmo or the wife of your father’s younger brother), 고모 (gomo or your father’s sister), and 이모 (emo or your mother’s sister), which are all translated as “aunt” in English. (Yes, Koreans like to get specific about kinship.)

Since 1910, people started calling any married woman, ajumeoni or ajumma.

In modern Korean society, ajumma is recognized as a relentless woman devoted to her children, in both positive and negative ways.

Summary
ajumma refers to a woman who’s married with children.
But in reality, people use it on anyone who just looks like ajumma.
So, it’s offensive and rude to call a single, youngish woman ajumma. You can tell because their hair is still long and they aren’t wearing hiking clothes.
You can call them ajumma if you’re looking to pick a fight.

The typical ajumma has short and black hair that’s tightly permed to preserve their wavy, voluminous hairstyle for as long as possible. This is to save time, money and energy.

They also enjoy wearing vivid hiking clothing, even when they’re not hiking.
(You’ve probably seen both ajumma and ajeossi in hiking clothes traveling all over the world.)

How do you refer to ajumma without offending them?

Although Koreans use the word, “ajumma” frequently, we tend to use it when referring to them with others and not directly to their face.

You’ll see a lot of ajumma working at Korean restaurants. In this case, try calling an older female waitress, “emo (이모 or aunt)“. It sounds way more polite and friendly.

At a school or hagwon

If you’re a teacher in Korea and need to have a parent-teacher conference, you can call an ajumma, “oo 어머니 (student’s name + eomeoni)“, meaning someone’s mother.

You can use ajumeoni (아주머니) to be more polite in most cases.

If you want to respectfully call a middle-aged woman, you can also use “사모님 (samonim means madam, missus, teacher’s wife, someone’s wife or superior’s wife)” or “여사님 (yeosanim means a married woman at least 40 years old, or boss’ wife)“.

Kim Yeosa (Mrs. Kim) is a term derived from “the wife of a wealthy boss who drives a nice car”.
Over time, it mutated into a broader term referring to a “horrible ajumma driver”.
Kim Yeosa usually ignore pretty much everything, including traffic lights, lanes, brakes, traffic flow, common sense, etc. They make you wonder how they even got a driver’s license in the first place.

To be fair, men can be seen doing the same things but more aggressively.

If you drive in Korea, make sure to watch out and avoid these types.

Yakult ajumma is a door-to-door salesperson at hy (formerly Korea Yakult). You can see them all over Korea.

Their official title is actually “Fresh Manager” in English, but with Korean pronunciation. They wear a yellow suit with a yellow brim hat, and drive an electric cart with a refrigerator. (this car was originally a simple bag full of drinks, then a cart. It’s been upgraded over 50 years into basically a transformer with its own temperature-controlled cockpit.) They present the perfect warm image of ajumma.

But, they’re more like an unstoppable force of nature.

Yakult ajumma will deliver yogurt everywhere, including apartments and a mountain top. No one’s safe from their reach. They’re Korea’s version of the mailman who works in rain, sleet or snow.

They can enter any company freely, like an “authorized information collector”. (Yakult ajumma is known to have a free pass, even during protests with heavy police presence).

The combat power of ajumma is notorious. If the U.S. has gangsters, Japan has Yakuza, and Italy has Mafia, Korea has jopok (조폭 or mob) and ajumma.

According to old records, ajumma in Joseon Dynasty beat a tiger with her bare hands. It may sound like a lie, but it’s not uncommon to find ajumma beating up tigers on the Veritable Records of the Joseon Dynasty. (it happened more than once)

There’s also a record of a foreign visitor trying to stop a fight between a police officer and a passerby during the Late Period of Joseon, and he got beat up by the passerby’s wife (ajumma).

Farmer’s markets and public transportation are their preferred territory and places where their combat skills shine the most. If an ajumma picks an item first, it’s better to give up and choose another.

Ajumma are known to use their powers for good. One saved my friend from a mugging by shouting at the assailant until he slunk off in shame.

Where does this power come from? A combination of toughness from raising a child in Korea and a sense of revenge for the years of being looked down upon for being a young woman. Ajumma gain status in Korea once they have children, so for them it’s time to live life to the fullest.

Be wary of sharp elbows and a low center of gravity ideal for poking and pushing.

What is auntie in the Korean language?

You can call older females you don’t know on the street, ajumma (아줌마) or emo (이모) if you want to get on their good side.

Yes, some ajumma can be rude. The stereotypical ajumma is loud, tenacious, rude and relentless. Ajumma can also be nosy and nag a lot. These types are considered jinsang (진상 or obnoxious) ajumma, so not every ajumma is like this. There are still a lot of elegant ajumma full of jeong too, they’re just overshadowed by the woman who stole your seat on the subway.

Is ajumma an insult?

When kids say ajumma, it’s socially acceptable and not insulting. But, it can be an insult if adults refer someone directly that way. Especially, calling a single youngish woman ajumma is very offensive and rude. You can call them ajumma only if you want to pick a fight. In this case, maintain eye contact while slowly saying “ah-jum-mah”.

What does ajeossi and ajumma mean?

How old are ajumma?

Ajumma are usually in their 50s-60s, but it really depends on how they look. If someone looks like an ajumma, she’s considered ajumma in Korea. It’s more of a state of mind and younger women can be ajumma too.

How are ajumma created?

It all starts with the perm. A woman in her 30s gets one because she’s overworked with kids and wants to try something new. She gets a loose perm because heaven forbid, she looks like an ajumma. Her friends and coworkers compliment her and it all goes downhill from there. Work piles up and that perm gets tighter and tighter to save time. Next thing you know, she’s wearing leopard print pants and passing you on a hiking trail.

Let us know your thoughts on ajumma in the comments!