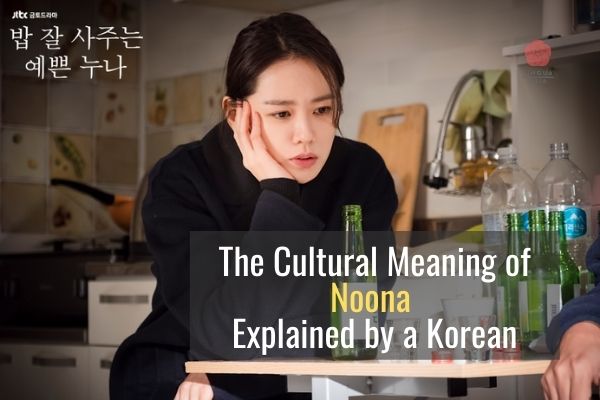 Noona can be a hot older woman or a cool female friend you hang out with.

This post covers the different meanings of noona from a Korean perspective.

Noona can be tricky to use because of societal norms in Korea.

Korean has special kinship terms for men and women based on relative age. There are five common ones that shape relationships:

Having a noona is a great way to better understand Korean girls. A good noona will give helpful relationship and fashion advice among other things.

Both mean the same thing, but “nuna” is the correct spelling according to romanization rules, while “noona” is more accurate according to how the word sounds.

For the purpose of this article, we’ll use the word noona.

What does noona mean in Korean?

The literal definition of noona (누나 in hangul) is “older sister”, used by men. But, there are many other situations where the word is used.

To emphasize that she’s your own sister, you can add “chin (친)” before noona: chin noona (친누나).

You can call your own older sister or older female relative such as cousin, “noona”.

An older female cousin in Korean is “sa-chon noona (사촌누나)”.

Age is calculated differently in Korea according to these rules:

You can also address an older woman in a friendly way by calling her noona.

In college, if you’re a guy, you start calling an older female by “name + sunbae (선배 or senior)”, which is gender neutral, first. Then, once you get close to them, you can call them by “name + noona”.

How to make noona honorific?

Knowing what to call someone is a major hurdle for Korean language learners.

The suffix “-nim” is the most common way to make a title honorific. But, it’s never used for noona.

Instead, there’s “noonim (누님)”, which is the honorific version (although it’s not commonly used).

Some women dislike being called “noonim” because it makes them sound too old.

If you’re a guy and have a classmate at a Korean university who’s a married woman over 40, you can call her noonim. She’ll appreciate it more than being called ajumma.

What does noona do for you?

Chin noona (biological older sister) will generally shape a Korean man (their younger brother) to be a nicer guy for you to date.

Korean men with noona tend to be more sensible and pay careful attention when dating. This is because the older sister will boss the younger brother around and make them run errands to buy sweets they like.

They’ll also help the younger brother dress better and develop fashion sense. Or, it might go the other way and they’ll be over women.

However, when it comes to marriage, it’s a different story. Korean women don’t prefer marrying a guy with many older sisters (시누이 or sister-in-law) as they can be meddlesome. They might try to become the boss and put the new wife to work.

Even non-biological noona usually feel obligated to take care of you since you’re younger than them.
(Age plays a big role in Korea and is more than just a deciding factor in honorifics. It shapes behaviors and relationships)

Noona will most likely buy you meals since 밥 (bap) is a very important part of social life in South Korea. They’re also great at giving advice on dating or understanding girls.

To have a better cultural understanding, you can watch the K-drama “Something in the Rain” on Netflix. Its original title is “밥 잘 사주는 예쁜 누나”, literally meaning “pretty noona who buys me food”.

Even though a relationship between an older woman and a younger man (연상녀와 연하남) became more and more common in Korea, many guys still struggle with dating noona because they first view them as a younger brother (or dongsaeng).

And guys need to change that perspective first before dating.

This is clearly expressed in a K-pop song, “내 여자라니까 (Because You’re My Woman)” by Lee Seung-gi, which was sensational when released in 2004.

난 그냥 기다릴뿐
I can only wait.

When should I start calling a girl noona?

This is probably the trickiest of all the kinship terms, because women are often sensitive about their age in Korea. Definitely avoid calling someone noona when you first meet, unless she’s clearly a lot older than you (women will only be happy to hear noona in this situation).

If you see her again and start to get along well, you can always ask her.

If she asks you to call her noona, then it’s a green light. This will usually mean that she views you as a close friend whose company she enjoys. You’ll most likely not be considered as a romantic partner at this point, but you never know.

I don’t, but my brother does. He went to gyodae with heaps of older women, some of which became his noona. There are many students in the education department who worked for a bit and hated company life.

They returned to uni to become teachers and some even had a ten-year age gap with my brother. He said they were very happy to be called noona in that situation instead of aunt (이모 or emo).

My brother says it’s like having an older female friend but with an added societal obligation for them to look after you and you to defer to them.

Noona tend to drive you around since they often have a car and pay for meals. You must respect them in return and heed their advice. They also make you carry heavy stuff around during MT or other school events.

Having a noona can be complicated. Girls in Korea are concerned about their age, since society pressures them to look young and get married/have children.

They might even hide their age or round down by a few years. It’s a good idea to tell them they look young and don’t talk about age that much. After all, what’s a few years between lovers?

For noona, having a younger boyfriend/husband (연하남 or yeonhanam) is a mixed blessing. In Korean, we say 능력 있다 (neunglyeok eetda) or 능력자 (neunglyeokja) when someone dates a younger partner. It means you have skill or you’re a capable person. This is even more surprising and unique for women with a younger beau.

It’s great to have a younger boyfriend, but they can be immature and irresponsible. It can feel like babysitting at times and some younger men will try to take advantage of the situation.

Older Korean girls will often tell you not to call them noona, so this dynamic doesn’t form.

What is sister in the Korean language?

What you address your sister as in Korean depends on your relative age and gender.

No, it simply refers to an older sister/woman in a friendly tone. Most guys who are or want to be in a relationship with noona don’t want to call them noona, unless they want to be cute or ask for a favor.

What’s the difference between Noona and Unnie?

When can I start calling an older female Noona?

Not when you first meet, but after a few interactions and some rapport is built. It’s a good idea to ask them first as well.

1-10 years is a good rule of thumb. Some women might not like being called noona if they’re only a year older than you. It never hurts to ask first.

It can be, but most younger Korean guys try not to call women noona once they’re in a relationship. But, when cute younger guys say noona, it can work.

What is the difference between noona and noonim?

Both noona and noonim mean an “older sister” used by men in Korean, but there’s a subtle difference. Noonim means an elder sister with higher honorifics than noona.

Noonim isn’t used very often until people get over 50. Some women don’t like being called “noonim” as it makes them feel older. But, it’s still better to call them noonim than “ajumma”.

What does it mean when an older girl I like asks me to call her noona?

She enjoys hanging out with you, but you’re probably in the friend or sibling zone from now on. It’s very hard for a woman to change her perception of you as a younger and immature little brother/friend.

Spend some time alone and see what develops. Or just enjoy the ride and be happy you found a cool older female friend.

What does it mean when a younger guy I like calls me noona?

It definitely means he likes you in some form, feels comfortable around you and wants to spend time together. It doesn’t necessarily mean you’ve been friend zoned though. He thinks of you as a sister or someone close. (It certainly feels closer than sunbae.)

Most of the time, he doesn’t know what it means. The best thing to do is spend time with him alone and see if anything develops. Confidence is sexy, so overthinking will just work against you.

Let us know your thoughts on noona in the comments!