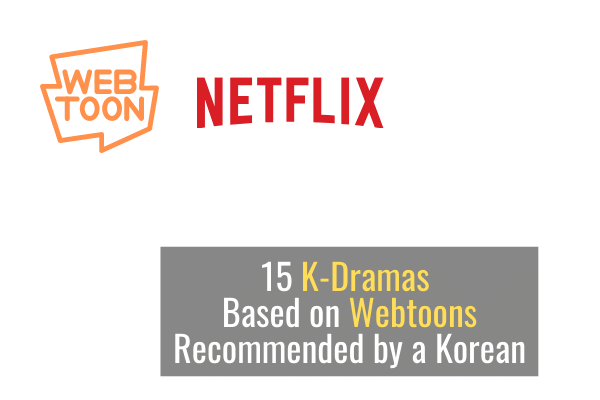 This post shares the latest K-dramas based on Webtoons.

I’m obsessed with Webtoons and binge-watching Netflix, so this was fun to write.

I organized the K-dramas by year.

Korean dramas used to be all about a Jaebeol guy falling in love with a poor, yet super pretty girl.

Now that they’re diversifying storylines based on Webtoons, I started enjoying K-dramas even more.

They’re also full of great quotes you can study Korean with.

Here are the 15 K-dramas based on Webtoons I’m most excited for!

Webtoon-based K-dramas guarantee a high viewership since they come with a loyal fan base.

Korean Webtoon fans prioritize casting, or “synchronization” between characters and actors/actresses (how much they look like the characters they’re based on).

True Beauty presents beautiful drawings that bring a smile to my face.

The main female character, “Ju-gyeong”, looks gorgeous, but is hiding something. Her makeup technique is the reason why she’s pretty. Also, she’s in a love triangle with “Su-ho” and “Seo-jun”, because why not?

The Webtoon is still running, but it’ll air on tvN later this year.

Amazing Rumor is a must-read Webtoon.

The story is about “Counters”, people with supernatural powers who catch evil souls escaped to Earth for eternity. It balances humor with serious situations, and has really good action.

I’m super excited to watch this in drama format. It airs on Netflix in December, 2020.

Currently, 2 episodes are out and I’m happy with the quality so far.

It’s a love story, but with fantasy and lots of 사이다 (cider, a trendy Korean word that means something gratifying. Its antonym is 고구마 (sweet potato that means feeling constrained like you’re choking on, well, a sweet potato).

Hyeri (혜리) will play Lee Dam and Jang Ki-yong (장기용) will play Shin Woo-yeo. Although they’re good looking and act well, many fans aren’t so thrilled since the synchronization of main characters is way off. But, I hope their drama is a hit.

Love Revolution is one of the most popular teen romance Webtoons.

The story is about friendship and teenage love. The main couple is “Wang Ja-rim”, a very chic girl, and “Gong Joo-young”, a puppy-like cute boy.

As soon as this Webtoon debuted in 2009, it was ranked #1 on Naver Webtoon.

The story is about people trapped in a high school where a zombie virus spreads, and the people who try to save them. The Webtoonist perfectly captures the psychological state of humans in extreme situations with some graphic and brutal drawings.

It will be produced as a Netflix original series. Many fans are looking forward to this K-drama.

I’m super excited about this bizarre thriller Webtoon being adapted into a drama.

The story is about a loner boy who lost his family and tries to survive against monsters in his apartment.

It will be produced as a Netflix original series.

I’m curious to see how they’ll recreate the monsters, since they’re very unique and scary.

Itaewon Class is about the hip rebellion of young people in this unfair world. The story takes place in Itaewon, which is like a microcosm of the world.

I loved this Webtoon for its solid story about successful entrepreneurship and gratifying revenge with awesome character development.

The Webtoonist actually opened his pub “Kkulbam (or 꿀밤 meaning honey night)” in Itaewon, just like in the Webtoon.

I haven’t watched this drama yet, but I will soon since it’s on Netflix.

Mystic Pop-up Bar is about a strange Pojangmacha (포장마차, tented wagon, or street bar) that appears late at night. It’s an oriental fantasy where Wol-joo, the owner of the bar, can enter people’s dreams and relieve their pain from deep resentment or sorrow.

This Webtoon is driven by the narratives of each episode, whereas the drama focuses on how main characters solve cases. Both are fun!

Memorist is about ‘Dong Baek’, a detective with a super power that allows him to scan memories. The story is about Dong Baek and Han Seon-mi (elite profiler) investigating a mysterious serial killer.

I loved the Webtoon for its solid storyline and ending.

I haven’t watched the drama yet, but I heard it was well-made but with a different ending.

Pegasus Market is a satire/comedy Webtoon. The story is about a grocery store, which is owned by a leading conglomerate. Working at the store is considered a career-killer, so management sends those they don’t like to work there. It shows the petty politics of the workplace in a fun way.

I didn’t even know they made a drama out of this Webtoon, but I’ll check it out.

Hell is Other People is a grotesque Webtoon where the story unfolds in a Goshiwon (고시원, a tiny, fully-furnished room like a private dormitory).

Since I have experience living in a Goshiwon for 2 months in Gangnam, this Webtoon felt especially scary. It’s terrifying, but super addictive.

This drama was successful in Korea even though the story was a bit different than the Webtoon.

Love Alarm is about an app that alerts people if someone in the vicinity likes them. The main character, “Kim Jojo”, finds love in high school, stops using the app, and deals with adversity.

There’s controversy over the Webtoonist frequently taking a break (which is rare in Korea), and the story line. However, it’s still popular for its creative source material.

You can watch the drama on Netflix.

My ID is Gangnam Beauty is about the Korean point of view on plastic surgery.

Although plastic surgery has become common, it’s still viewed negatively. The story is about beauty-obsessed Korean society where people easily criticize and evaluate the appearance of others.

I loved the Webtoon, and liked the drama. (Some complained that the drama is too different from the Webtoon though.)

Clean with Passion for Now is a romantic story where a man with germaphobia who runs a cleaning company, falls in love with a dirty girl (dirty like poor hygiene, not the other way) who is super bright and positive.

I only saw the drama, but it was pretty light and fun to watch.

치즈인더트랩 (Cheese in the Trap)

Cheese in the Trap may look like a regular romantic comedy, but it’s a “dark campus battle romance” according to the Webtoonist. The story is not only about love and friendship on campus, but also about relationships between people and how they’re affected by them.

The Webtoon portrays college life in a realistic way, while describing the detailed psychology of each character. However, the drama was turned into a standard love triangle, with the producer’s strange obsession over Seo Kang-joon (서강준) who played the supporting role of Baek In-ho.
(She cut out many scenes with Park Hae-jin (박해진) who played the main role of Yoo Jung even though they’d already finished filming, and strangely showed Seo Kang-joon way more.)

Let’s hear from you!

Webtoons are becoming a force to be reckoned with in the K-drama world.

Let us know your favorite K-dramas based on Webtoons in the comments!