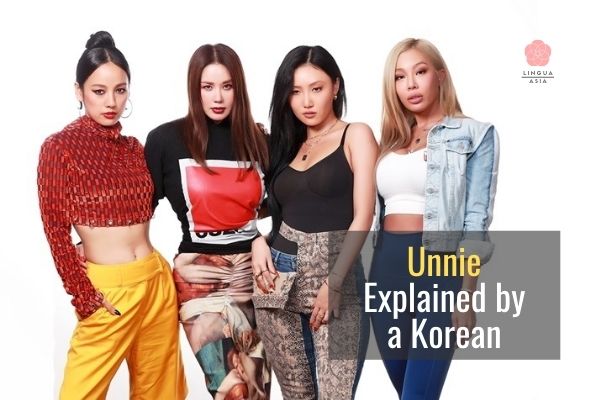 Not sure when to call someone unnie?

Find out its many meanings and how to use them below!

Unnie can like or dislike you regardless of what you do. Good ones are fun female friends who have your back in tough times. Some will treat you like their own younger sister.

Korean has a unique system of referring to siblings that changes depending on relative age and gender. The five ways are:

These are used daily to refer to people outside of your family as well.

For example, you may call an older female classmate “unnie” in some situations, even though you’re not related.

Having an unnie can be super fun in Korea. Find out the pros and cons below!

Unnie has the most spelling variations among kinship terms in Korean. They all mean the same thing, but “eonnie” is the correct spelling according to romanization rules, while “unnie” is another acceptable version. You might also see “oni” and “uni”, which aren’t so common.

For the purpose of this article, we’ll use the word unnie since it’s more common.

What does unnie mean in Korean?

Unnie (언니 in hangul) means “older sister”, but is only used by women. There are other situations where the word is used.

To emphasize that someone is your own sister, you add “chin (친)” or “woori (우리)” before unnie: chin unnie (친언니) or woori unnie (우리언니).

You can call your oppa or older brother’s wife, “sae unnie (새언니)“, which literally means new unnie. This doesn’t sound mean like it would in English.

You can call older female relatives such as cousins, “unnie”.

An older female cousin in Korean is “sa-chon unnie (사촌언니)”, but you don’t call her that. Instead, you can call your sa-chon unnie by “name + unnie” or simply “unnie”.

You refer to her as “sa-chon unnie” when speaking with others.

Age in Korea is calculated according to these rules:

You can also address an older woman in a friendly way by calling her unnie.

There’s a special exception at restaurants or pubs where men over 60 can call female servers unnie, which sounds friendly.

If you’re a girl in school, you start calling older females by “name + sunbae (선배 or senior)”, which is gender neutral. After you become more familiar with each other, you can call them by “name + unnie”.

If someone is really pretty or cool, girls call them “unnie” as a sign of respect.

Close female friends jokingly say “unnie” to each other with aegyo, even when they’re the same age. This is usually done by the one asking for advice or saying thank you for a free meal.

It’s to spice things up and should be used only sometimes for fun.

What’s the cultural background of unnie?

In Korea, sisters fight a lot from teens to early twenties.

They may get along well like best friends, especially if they’re in the same fan club. On the other hand, if their favorite K-pop idol groups are rivals, they’ll fight as well.

Just like all brothers and sisters, the relationship between dongsaeng and unnie is pretty bad during puberty. Unnie is stressed out by their younger sister’s behavior and is quick to yell at her. Dongsaeng dislikes unnie’s commands and meddling, so she fights back.

Unnie and dongsaeng usually argue by saying, “she used my cosmetics/wore my clothes without permission”, “she ate my cake”, etc.

However, sisters argue less and less as they enter adulthood and get closer. Unlike siblings and brothers who become distant during adulthood, unnie and dongsaeng mostly maintain their friendship.

Most of my friends are very happy to have their unnie because they can share many things. (They’re especially ecstatic after both getting married and having kids, since they can share even more.)

I don’t have a biological unnie, but I grew up with my best friend having one.

From my 20+ years of observation across the street, they used to fight a lot in school mostly about clothes, then became super-duper close, especially after they both got married and became moms.

My friend and her unnie now say that they’re ecstatic to have sisters more than anything.
(Honestly, I wish I had a sister too. Oppa is nice, but there are more things you can share with an older sister.)

Having an unnie of my friend is the best, since she’s been unconditionally kind and nice to me, sometimes more than to my friend (probably just on the surface, but still, I’ll take it!). Unlike some judgy jealous type of unnie from school or your major, they’ll treat you like their own sister and root for your journey.

Meanwhile, I also had some undesirable experiences with unnie at high school and uni. Some thought I wasn’t polite because I didn’t bow 90-degrees every time I encountered them. I mean, I bowed, but not always 90 degrees.

I was a kid who thought respect should be earned, not automatically granted just because they’re older than me (I still believe this, but don’t tell anyone 😉).

At my uni, a group of unnie (more like sunbae to me since I didn’t feel close to them at all) criticized me for having a good GPA during my freshman year. They said I should “place my GPA on the bottom” for sunbae. After that, I even lost any respect I had for them.

The bottom line is unnie can be nice or horrible just like every other human interaction. My advice is that you don’t need to care too much about the negative ones. Because some like you no matter what, and some don’t for no reason.

How to use unnie when you first meet someone

You CAN use “unnie” during the first casual meeting once everyone reveals their age (Koreans casually ask how old you are to determine how to address you.)

Unnie sounds really nice and friendly, so no one will get upset when called unnie.

How to make unnie honorific?

Showing the right amount of respect can be tricky for Korean language learners.

The honorific suffix “-nim” is the most common way to make a word honorific. But, it’s never used for unnie.

What does unnie do for you?

Unnie, like hyung, feel a bit pressured to take care of you. They’ll pay for meals and give beauty, life and dating advice. Unnie help you resolve issues if you’re in an unfair situation, or help you get a refund from a store if you’re too shy.

Many unnie influence their younger sisters in terms of fashion style, major, etc. Unnie also take you to cool places like trendy cafes or shopping. It’s nice to have unnie since you can share pretty much everything, including hobbies, attire and perfume.

Although unnie get mad if you use their expensive clothes, purses or shoes without permission, they’ll still love you and don’t tend to beat you up like hyung. But still, unnie can boss you around.

In Korean culture, unnie get married first unless she chooses to be single. If younger sisters or dongsaeng have a wedding before their unnie, it’s considered very inappropriate and almost as a betrayal.

Having a nice unnie is awesome because they’ll provide a feeling of sisterhood and a lot of good life advice. However, it’s also a double-edged sword that you need to be careful of.

Finding a nice one is very hard. Some easily get jealous of you and backbite. (Not all, but some unnie dislike younger females just because they’re younger as aging is viewed negatively in Korea.) On the other hand, once you get to know kind and loving unnie, they’ll be nice to you unconditionally and you can tell them anything.

What do you do for unnie?

When unnie buys you a meal, you can pay for coffee after. Also, giving them delicious desserts or birthday gifts will help you win their heart.

Once unnie like you, they’ll tell you to talk casually (반말, bahn-mal). It’s easy to make mistakes (being too familiar and disrespectful) when you feel too comfortable. Just make sure to show some respect because if unnie feel like you’re looking down on them or being rude, you might actually lose them.

What is sister in the Korean language?

What you directly call your sister in Korean depends on your relative age and gender.

What’s the difference between Unnie and Noona?

When can I start calling an older female Unnie?

Not when you first meet, but after a few interactions and some rapport is built. It’s a good idea to ask them first as well.

1-10 years is a good rule of thumb. Some women might not like being called unnie if they’re only a year older than you. When in doubt, ask.

The most well-known satoori (dialect) for unnie is unniya (언니야) used in Busan and Gyeongsang-do.

Let us know your thoughts on unnie in the comments!

4 thoughts on “7 Meanings of Unnie (언니): the Art of Having a Fun Sister in Korea”