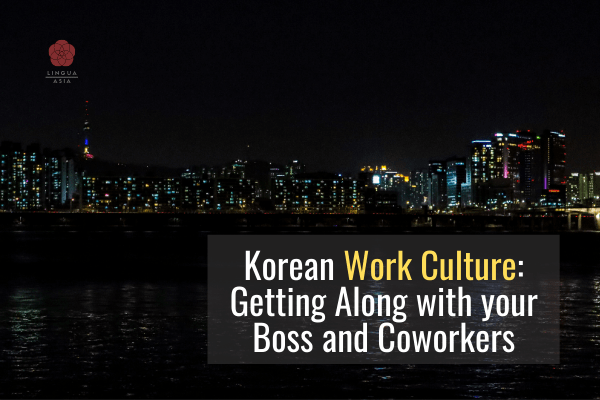 This guide will help you understand Korean work culture and get along with your coworkers and bosses.

I worked at Korean companies for 5 years.

Here’s what I learned!

At the end of the day, Korean work culture is similar to that of any other hypercapitalist country with some East Asian collectivism thrown in for good measure.

That being said, there are some unforeseen advantages of working in a Korean office environment (yay free food and booze!).

This post is more about finding common ground and small wins than giving up your individualism. I wouldn’t expect you to bend over backwards to satisfy those around you, and neither should anyone else.

A little bit of compromise and understanding can go a long way in Korea. I made many mistakes while working at companies there like being too stubborn or seemingly unappreciative.

Read on to learn how to excel in Korean corporate life.

My Experience Working in a Korean Office

I worked part-time at a few companies as a lecturer and overseas marketer for a few years. I was getting by, but felt I was stagnating. I wanted to work full-time at one company, so I could build a career. Part-time work is not considered a real job in Korea. I disagreed with this until I started working full-time. The lifestyle and mentality are totally different.

You become part of a community in ways that surprised me. Office politics ramp up to 11 and I definitely stood out. I had a good relationship with the owner, so that shielded me from many things.

In hindsight, I should have given the middle-managers more attention and spent some time getting to know them. You must respect the hierarchy in Korea.

I still disagree with the idea that staying late to just shop online and chat on Kakao is dedication, while finishing your tasks during work hours and leaving on time is slacking.

To be fair, I didn’t exactly work at a fortune 500 company. There are well-organized and healthy office environments in Korea.

Spring cleaning days – everyone is expected to pitch in and clean the office periodically. The same applies to schools and the military. I think it’s a good way to build rapport and a sense of community.

Random free food – It seems like everyone is bringing in snacks, coffee and food throughout the week. That always makes the day a little better.

Job security – If your boss likes you, they’ll take care of you for life. They call it your “line”. My former roommate tended to follow his boss to other companies every few years until he became CEO. That type of job security is hard to find.

Expanding job description – If you speak English, you’ll be the unofficial company lawyer, marketer, entertainer of foreign clients and anything else involving the language. I was uncomfortable with this at first, but then saw the advantage of learning multiple skills. In the end, it gave me the confidence to start my own business, because I could pick up anything.

Lack of clear feedback and expectations – This might have more to do with the place I worked than Korean office culture, but goals were vague and the company vision was unclear. I never knew if we were going in the right direction or I was doing enough.

Hweshik (semi-mandatory office gatherings) – These were fun at first, then became a chore. It’s a free night of eating, drinking and singing noraebang. But, it often turns into impromptu work meetings. There are a few things I’d rather do than get drunk and discuss work with my boss after hours.

MT (membership training) – You go to the mountains for the weekend with coworkers, play games and get drunk in a pension. Or you might go skiing or biking along the Han River before getting drunk. You’re definitely getting drunk though. Like the above, it’s great at first then becomes a bit much.

Surprise unpaid overtime – I worked nights and weekends often because everyone was doing it, and if I didn’t, someone else would have to. The same can be said for many modern companies though.

Harsh fluorescent lighting – This comes off as whiny, but they’re draining. If I’m going to be inside for 10 hours a day, it can at least be somewhat pleasant, not lit up like an interrogation room. I’ve been told that this type of lighting is used in schools and colleges to keep students awake so they’ll study.

More about Jobs in South Korea as an Expat

I’m glad I worked in a Korean office environment. These experiences shaped me into who I am and showed me what I do and do not value.

Read on to find out more about navigating Korean work culture in different situations.

Tips on How to Survive in a Korean Work Environment

Consider each of these like a strand in a spider web. Each one will bolster the other to make the office environment easier.

More about Negotiating in South Korea

There are some major differences between working at a private language academy and a company.

Working at a hagwon can be pretty nice, because you teach your 30 hours or so a week and that’s pretty much it.

Anything you do above that is paid overtime.

More about teaching English in Korea

Working at a company means your hours are unlimited. You are paid a fixed salary and the company will work you as much as they can.

Hweshiks are optional at hagwons if you’re a foreign teacher. Hweshiks are mandatory at companies.

Work can be repetitive and somewhat discouraging at hagwons. Work can be diverse at an office, and you can learn many new life skills.

Like I’ve said before, if you don’t like Korea now, just wait a few years. It’s progressing at a rapid pace.

Korean labor unions fought hard in the 80s and 90s to get weekends off. You can still see them fighting to this day if you go to Gwanghwamun or Yeouido

Here are some ways work culture has gotten better in the last 10 years.

More about Interviewing in South Korea

How can I get along with coworkers in Korea?

It’s like a family with a strict hierarchy based on title, seniority and age.

Why is Korean work culture so tough?

Because of Korea’s history, education and culture. Life is tough in Korea from school to mandatory military service to the first job.

What is the Korean attitude towards work?

What should I avoid in Korean work culture?

These are some common mistakes when working in Korea:

How to learn Korean

Pimsleur is the language program I wish I knew about before going to Korea. I used it later to become conversational in Japanese in 90 days. You can try Pimsleur here for free!

Let us know your experiences in a Korean office in the comments below!