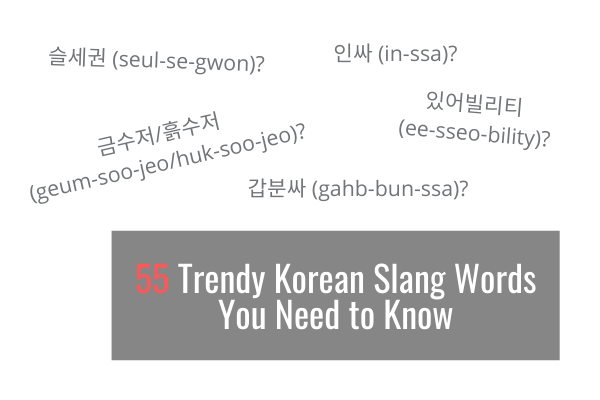 Here are the newest expressions guaranteed to impress your Korean friends.

Some of them are a little inside, so we made sure to explain them clearly.

I started with my favorites and the most common slang first.

Listen to this Article

법블레스유 (beob-bless-you): Koreans deal with a lot of stress and even some suppressed rage. A compound word of “법 (law)” + “bless” + “you”. It means, “if it weren’t for the law, I would mess you up” as a warning that the law saved you.

셰어런츠 (share-rents): We all know one. A compound word of “share” + “parents”. Someone who posts a pic of their child every hour on social media like their life depends on it.

스몸비 (smombie): A compound word of “smartphone” + “zombie”. People who walk on the street staring at their smartphones. We’ve all been guilty of this at some point.

있어빌리티 (ee-sseo-bility): The ability to look rich or successful. This is usually done by taking a selfie with your friend’s luxury bag or in front of someone else’s sports car. Used especially for people who show off on social media.

갑분싸 (gahb-bun-ssa): An abbreviation for “갑자기 분위기 싸해진다”. It means “sudden and awkward silence”. Great for many situations, like after you say something in an active group chat that kills the conversation.

금수저/흙수저 (geum-soo-jeo/huk-soo-jeo): Gold spoon or dirt spoon, meaning born rich/poor. Koreans like to use opposites to play with the language. They also have one for super rich kids called “다이아 수저 (diamond spoon)”.

꾸안꾸 (kku-ahn-kku): An abbreviation for “꾸민 듯 안 꾸민듯”. This means “a natural, yet fashionable style”. Or putting a lot of effort into looking like you didn’t.

아싸 (ah-ssa): A Korean version of 아웃싸이더 (outsider). Someone who doesn’t like to hang out with people.

인싸 (in-ssa): An insider who is popular and gets along with people. The opposite of the previous one.

핑프 (ping-peu): Finger prince/princess. A person who keeps asking questions they can easily find the answer to on their smartphones.

할많하않 (hal-mahn-ha-ahn): An abbreviation for “할 말은 많지만 하지 않겠다”. It means “I have a lot to say, but I won’t”. A passive aggressive way to deescalate an argument. Results may vary.

호캉스 (ho-kang-seu): A compound word of 호텔 (hotel) + 바캉스 (vacation). It means staycation in Korea. This is especially popular during the pandemic.

Latte Is Horse: 나 때는 말이야 (Na-tte-neun-mal-ee-ya). Na-tte sounds similar to latte, and mal is horse in Korean. It’s a sarcastic expression for 꼰대 (Kkondae, a condescending person who is usually older, like “boomer”) who always says “in my day”.

갑통알 (gahb-tong-al): An abbreviation for “갑자기 통장 보니 알바 해야 할 듯”. This means “suddenly, looking at my bank account, I should do an arbeit (part-time job)”. In other words, you’re shocked you’re broke and need to get a job.

갓수 (god-soo): 갓+백수 (god + jobless). It refers to a person who doesn’t work, but is comfortable spending money. Young Koreans often add “god” as a prefix for someone who’s the best, without meaning anything religious.

구레니얼 (goo-lennial): A person from an older generation who communicates with millennials. Think of a grandpa using new slang.

대유잼 (dae-yu-jam): A mixture of Hanja and Korean, meaning “great fun”. You can describe a person or TV show as 대유잼.

라떼파파 (latte-papa): A babysitting dad who holds a cup of latte in one hand and a stroller in another. Most Koreans think these men exist only in Sweden as they view it as progressive. Women do most of the parenting in Korea.

롬곡 (lum-gok): It’s the upside down version of “눈물 (tear). Koreans use it online mostly.

마싸 (mah-ssa): A combination of “my + sider”. A person who focuses on him/herself. Someone who likes doing things “my way”.

멍청비용 (meong-cheong-bee-yong): Money that someone wastes out of stupidity. Can be used for lotto tickets or late fees.

무민세대 (moo-min-se-dae): A compound word of “nothing (無)” + “mean” + “generation”. It refers to people in their 20s to 30s who look for joy and happiness from what seems useless and meaningless. Think millennials who don’t want a hectic life for no reason.

복세편살 (bok-se-pyeon-sahl): An abbreviation for “복잡한 세상 편하게 살자”. It means “let’s live a comfortable life in a complex world”. Very useful with all the negative news recently.

비담 (bee-dahm): A “visual member” of an idol group, meaning the most attractive.

알잘딱깔센 (ahl-jal-ttak-kkal-sen): An abbreviation for “알아서 잘 딱, 아주 깔끔하고 센스있게”, which is used in the office. It means “doing a job perfectly without explanation needed”.

이생망 (ee-saeng-mahng): It’s short for “이번 생은 망했어”, meaning “this life is doomed”. Great for after you made a huge mistake.

일점호화 (il-jeom-ho-hwa): A phenomenon where a person usually saves money by reducing consumption, but spends a lot on ‘one luxurious thing’. People who eat cup noodles all year to afford a Michelin Star meal.

자만추 (ja-mahn-chu): A short way to say “자연스런 만남 추구”, meaning “pursuit of a natural encounter”. It’s for people who want to meet someone without being set up on a blind date or using an app.

프리터족 (freeter-jok): People who deliberately choose not to work full-time. Jok means “tribe” and is used often to describe groups of people humorously.

할류열풍 (hal-lyu-yeol-poong): It’s kind of like a 한류 (Korean Wave), but for grandparents who are crazy about giving expensive toys to their grandchildren.

Let us know your favorite new Korean slang in the comments!