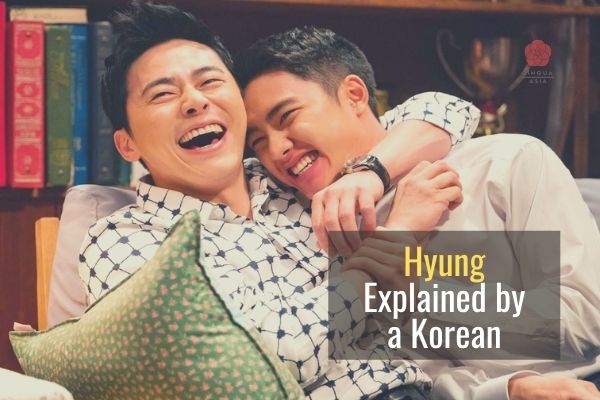 This post goes over the meaning of hyung from a Korean perspective.

Having a good hyung in your corner can make or break your time in Korea.

Korean has kinship terms that change depending on relative age and gender. The most common five are:

Having a hyung in Korea is loads of fun and a great way to figure out the culture firsthand. A good hyung in your corner makes a huge difference.

Both mean the same thing, but “hyeong” is the correct spelling according to romanization rules while “hyung” is more accurate according to how the word sounds.

Both are fine, but most people use the shorter “hyung” version.

What does hyung mean in Korean?

The literal definition of hyung (형 in hangul) is “older brother”, used by men. But, there are other situations where the word is used.

To emphasize that someone’s your own brother, you add “chin (친)” or “woori (우리)” before hyung: chin hyung (친형) or woori hyung (우리형).

You can call older male relatives such as cousins, “hyung”.

An older male cousin in Korean is “sa-chon hyung (사촌형)”.

You can also address an older man in a friendly way by calling him hyung.

Korean age is calculated differently according to these rules:

If you’re a guy in college, you start calling older males by “name + sunbae (선배 or senior)”, which is gender neutral. After you get closer, you can call them by “name + hyung”.

Hyung is mostly used by men nowadays, but it was unisex in the past. Here are a few traces of it.

Why did this change? The changes happened gradually over the period of many years. So, we’re not sure, but it’s helped a few K-pop songwriters.

College students, who were democratic activists in the 1980s, called each other hyung, regardless of their gender.

What’s the cultural background of hyung?

Exceptional hyung do exist. They’ll take care of their younger brother like a nice dad or friend.

However, most hyung wonder how to exploit their younger brother, especially when they’re a lot older or bigger.

My childhood friend was afraid of his hyung. For example, when his mom told him to eat more, he wouldn’t always. But, once his brother said “eat”, he finished his bowl of rice.

Most parents side with hyung in general when brothers fight each other, although it depends on the family.

But, at the same time, parents will scold hyung even more behind the scenes, saying “What are you doing as a hyung? Can’t you take care of your younger brother? Why can’t you be a role model for your dongsaeng?”

Brothers will understand each other’s positions once they become adults, but they never find out until then. If their bitter feelings or sometimes hatred is too deep, they may never see each other again.

Still, hyung can be the most reliable allies for younger brothers in times of crisis such as when they’re being bullied.

How to make hyung honorific?

Knowing what to call someone is a major hurdle for Korean language learners.

The honorific suffix “-nim” is the most common way to make a word honorific.

“Hyung-nim (형님)” can be used in several situations, when:

What does hyung do for you?

Hyung, like noona, feel a responsibility to take care of you. They’ll pay for all meals and give life and dating advice.

They tend to assume the leader role in groups of younger people.

Hyung might also order you around depending on how old you are and how nice they are.

Many Korean men choose their majors in university based on the recommendations of hyung. I knew one man who majored in German Language in the 90s because many Koreans were going to Germany for work.

Hyung will also help you deal with bullies and teach you how to fight (mainly by beating you up).

Having a hyung as a friend is usually great, because you choose them. Hyung will take you to cool places and pay for everything. They protect you from others in school or even an office environment.

Just make sure to be the same cool hyung to younger friends.

What do you do for hyung?

Hyung are supposed to be unquestionable, since most men join the military and learn strict hierarchy.

You should start by bowing and using formal language when interacting with them. If hyung like you a lot, they’ll tell you to speak casually. Men only bow 90 degrees to other men and call them hyungnim in gangster movies. This is because they’re a boss, not really hyung.

But, make sure to show respect, because they hate that from younger males more than anything.

It’s also important to listen to their advice, even if you don’t follow it.

When should I call someone hyung?

Hyung is easy to use as most men enjoy being called it.

It’s still wise to avoid calling someone hyung when you first meet them. It can be somewhat of a red flag if a guy insists you call him hyung right away. This could mean he wants to be the alpha in the relationship.

This might also mean that he likes you and wants to hang out. You can tell immediately if he starts talking down to you or bossing you around. Make sure you’re comfortable with them before making that commitment.

Having hyung can be great or horrible, depending on the person.

Many hyung are great. They’ll recommend you for some nice job opportunities, give advice on dating, marriage and investment, etc.

There does tend to be a more rigid hierarchy when having hyung compared to noona, since military service is mandatory in Korea. Korean hyung will talk a lot about their army days while drinking. So, if you didn’t serve, they might really look down on you. This is only true among Koreans though, since most other countries don’t have mandatory military service.

Some will expect absolute obedience and can lead you astray. In return, they’ll pay for everything when you go out. This is a pride thing that makes Korean men feel successful and important, so don’t feel guilty about it.

You’ll often observe Korean men fighting over the bill at restaurants, as in who gets the honor of paying it.

Hyung will spend a lot of money on a night out. Up to hundreds of dollars for VIP tables and bottle service at clubs. They might ask you to go to other tables and bring girls.

You can offer to pay for small things like coffee or late-night snacks.

If you feel uncomfortable with the dynamics of the relationship, then it’s smart to let it fizzle out.

When do dongsaeng (동생) or younger brother refuse to call their older brother hyung?

When the age difference is more than a year, but hyung doesn’t deserve the title or is deeply disliked by dongsaeng, the younger brother will call them by name, nuh (너, you), ya (야, hey) or gyae (걔, that guy). There will be more retribution after this of course.

In Korean culture, it’s very humiliating to be called 너 by a younger brother. This is only seen when they don’t get along at all or dongsaeng despises hyung due to childhood abuse.

What is brother in the Korean language?

What you call your brother in Korean depends on your relative age and gender.

What’s the difference between Oppa and Hyung?

How to say big brother in Korean?

How does a child say hyung?

Let us know your thoughts on hyung in the comments!

2 thoughts on “4 Meanings of Hyung (형) and How to Get Along with Them: Explained by a Korean”