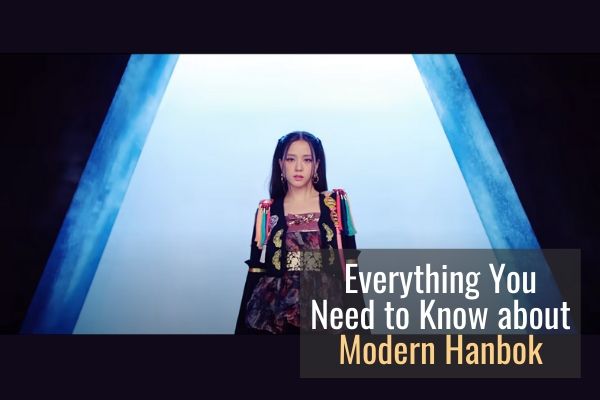 Modern hanbok is one of the best things to come out of Korea in the last few years.

Traditional hanbok used to be something I’d wear on holidays as a kid. It was fun but a lot of work to get me into one.

It’s great to see hanbok making a comeback in a more practical and stylish way.

This post explains the modern hanbok trend in South Korea.

What you need to know about Hanbok

Hanbok is a traditional Korean outfit that’s been around for centuries.

With their beautiful texture and patterns, they were reserved for special occasions like weddings, holidays and doljanchi.

There have been many attempts to revive hanbok in South Korea.

After seeing some K-pop artists, I was fascinated by how beautiful and stylish hanbok can be.

At the same time, there’s been some debate in Korea whether these can be viewed as our tradition, since the classic hanbok emphasizes graceful elegance, while modern hanbok uses some elements to look a bit showy.

I think they’re a great evolution of a classic that’s more accessible and fun to wear.

What is modern hanbok?

You can think of it as a remake that turns out pretty great while improving some things in the original.

Modern hanbok covers a lot of ground and styles.

The bottom line is, they look like hanbok, but are easier to wear as a daily outfit with a variety of materials and designs.

By using washable fabrics like polyester, rayon or linen, modern hanbok is more practical than traditional ones using silk. It also doesn’t get as hot or heavy and drag on the ground when you walk.

Modern hanbok has become popular among young Koreans. It doesn’t hurt that these stylish pieces are adored by many Korean celebrities too.

What is traditional hanbok?

It has been around for over 1600 years since the Three Kingdoms Period.

Traditional hanbok is beautiful with straight and curved lines in harmony. It’s categorized by ceremonial/casual purposes, men’s/women’s, adults/children and each season.

You’ll often see people wearing them during the two big holidays, Chuseok, Korean Thanksgiving, and Seollal, Lunar New Year. There’s even a push by the Korean government to make them a big deal again with Hanbok Day, a national holiday.

What are the differences between traditional and modern hanbok?

What is modern hanbok for Men?

You can also wear comfy Zijangsa pants like Jungkook, while mixing and matching the top or T-shirt.

What is modern hanbok for Women?

This is a lot simpler than traditional ones which even require specific socks, called 버선 (beoseon) and shoes.

Modern hanbok is a broad category that includes slip on rentals at tourist attractions and trendy outfits you can wear to work.

One thing’s for sure, Daenggi (댕기) is a perfect companion for women’s modern hanbok!

It’s a traditional Korean ribbon to tie up braided hair, and this hairstyle is called “Daenggi Meori (댕기머리)”.

Not only with hanbok, but it also goes well with Louis Vuitton, just like how Jung Ho-yeon dressed up for the SAG Awards! ヾ(≧▽≦*)o

Hair pins or small flower crowns will look cute with modern hanbok as well. Don’t forget to hold a cute little purse that matches the ensemble.

For men, daily hanbok (casual looks like robes and streetwear) don’t require accessories, but flashy modern hanbok rentals definitely require you to wear a gat (갓 or traditional hat) that you’ve seen on Kingdom. Bonus points if you rock the sword!

What does the hanbok symbolize?

People can now choose any color or colorway according to their preference. But in the past, Koreans had limited options depending on their social status or age.

For example, upper-class children could wear bright colors, and middle-aged adults could wear more subdued hues. On the other hand, commoners had to wear white clothes every day by law, which created the term 백의 민족 (the white-clad folk). They could only wear dull shades of pink, green or gray for special occasions. Tough time to be a fashionista.

Also, only the royal family could wear clothes with gold-printed patterns.

Is it okay for non-Koreans to wear hanbok?

Yes, absolutely! Koreans will love it if you wear hanbok. They don’t think of it as cultural appropriation, and see it more as a cultural victory (as long as you don’t say hanbok comes from your country!).

It’s common for foreigners to wear them during traditional weddings or in touristy areas like Gyeongju and Seoul. Koreans will happily rent them out and think only good things when they see them.

More about living in Korea as an Expat

In fact, they like it so much that you can get free entry into 5 palaces in Seoul if you wear one!

How much does traditional hanbok cost in Seoul?

Koreans mostly buy customized traditional hanbok before weddings for the couple and their parents/in-laws. It’s tradition for parents to wear hanbok to their children’s wedding, even those with western ceremonies.

My married friends who bought traditional hanbok said it comes in handy since they can wear it for weddings, studio photoshoots, doljanchi, holidays and more.

How much does a modern hanbok cost?

There’s good news, modern hanbok are way more affordable than traditional ones. You can easily buy them online (or get inspiration here). Their price ranges from 50 to 150 USD.

Most Koreans rent one for a day or a few hours when visiting Gyeongbokgung Palace in Seoul or Gyeongju. A modern hanbok look with traditional buildings/walls in the background is so Instagrammable!

Where can I buy hanbok?

If you’re looking for traditional hanbok in Korea, there are many customized hanbok stores, including Silkroot, Woonsunje and Songdongsu Hanbok in Jongno, and Bidanbim in Gangnam.

Who made hanbok for Blackpink?

Danha. As hanbok became trendy because of K-pop and Kingdom, YG Entertainment contacted Danha to collaborate on Blackpink’s new music video, “How You Like That”.

One of the garments is unisex with a combination of male 도포 (dopo or overcoat) and female 치마저고리 (chima jeogori or skirt and top).

Who made hanbok for BTS?

I used to think that hanbok were only for weddings, but now you can wear them anytime. Modern hanbok are even becoming a popular fashion trend. There’s a version for every occasion, including hanbok dresses.

So find the right one for you.

Let us know your favorite hanbok in the comments!