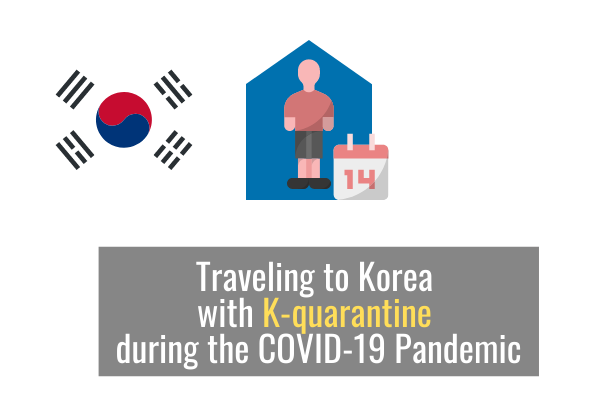 I experienced this in September and thought I should share the process.

The information here is valid as of September 2020 for long-term visa holders. This post is not in any way intended to encourage travel during the COVID-19 pandemic. Entry rules are constantly changing and vary by nationality. Make sure to check the Korean Ministry of Health and Welfare website before making plans. Experiences may vary.

We went to Vietnam in January 2020 when COVID-19 was just getting started. Since they seemed to have a handle on things and allowed unlimited visa extensions, we decided to stay as long as we could to avoid traveling.

After a mostly pleasant time riding out the pandemic in Hoi An/Da Nang for 8 months, it was time to move on. Vietnam’s strict lockdown measures gave us a few COVID-free months to enjoy the beach, gym and cafes responsibly (we wore masks and socially distanced in public).

But a stroke of bad luck that locked Da Nang down hard for two months (deliveries and outside exercise were restricted), along with coerced medical testing in unsanitary conditions and new visa rules that limited extensions to 1 month made the decision to leave easier.

The pandemic has revealed a lot of interesting things about other countries. Some ignore the problem, some do too much, and some do things just right.

Like Goldilocks, South Korea seems to have found a happy medium. Since March 9th, 2020 Korea has had:

They also have free press and widespread testing, so you can take their numbers at face value.

The end result is a manageable number of cases, while keeping the country running.

Going from Da Nang to Incheon

Danang has been nicknamed 경기도 다낭시 (Gyeonggi-do Danang-si) given the huge influx of Koreans who moved there for the weather and low prices. I was surprised at how many Korean restaurants, cafes and bars there were. They even have their own app called Delivery K which lists every type of Korean food you can imagine. (I actually ate more Korean food in Vietnam than I normally do in Korea)

Unfortunately, some felt scorned when Vietnam banned flights from Korea once the pandemic started, leading to a backlash of Korean flight out of the country. Koreans felt that Jeong had been formed, since so many had taken up residence in Vietnam, but it turned out to be one-sided.

It was sad to see half-finished Korean restaurants and abandoned bars and clubs that were being stripped for materials. Whether Koreans will return after the pandemic remains to be seen.

After the second strict lockdown in Danang, all travel in and out of Danang, including flights, were banned. It’s illegal to stop people from leaving, so the Korean Association of Central Vietnam (한인회) had been chartering flights since March and were on their 6th one.

Initially, they organized an Air Seoul (subsidiary of Asiana) flight for September 12th. Not to be outdone, Jin Air (subsidiary of Korean Air) decided to make things interesting by operating their own flight two days earlier for a slightly lower price. Normally Jin Air charges extra for baggage over 15KG, but for this flight, they allowed 25KG.

Air Seoul had to back out since there wasn’t enough demand. Ticket sales were sluggish and Jin Air sent out notices about how they accept Vietnamese Dong to increase sales. At one point they were even sending staff to people’s houses to collect payment.

As a form of poetic justice, Jin Air wasn’t able to sell the 100 tickets needed to break even (they sold around 80).

Airline drama aside, the booking process online was straightforward and we were able to get two seats away from everyone else.

Since all foreigners had been force tested for Coronavirus a few weeks earlier and none were positive, we weren’t that worried about the flight.

During check in, we found out that someone had booked the seat next to us, so we asked the staff to move us. The flight was half empty, so not sure why they didn’t choose another seat.

The Korean Association of Central Vietnam was still very supportive, even though they weren’t chartering the flight. They handed out free masks and Gimbap by the check-in counter.

Cabin crew were wearing masks, and some were wearing goggles but no full PPE. They provided water and a box with mostly sweet snacks.

They also sold food and drinks, but order coffee at your own risk. It’s hard for them to make a good cup, since they’re wearing masks.

Cabin crew passed out all the forms you need on the flight.

Once you get off the plane, there’s a counter where they check your temperature and take the first form. Then it’s seemingly business as usual with two separate passport control lines for foreigners and Koreans.

Now there are just a few more steps. The first thing you do is sit at a table where a soldier asks to see your phone. They set up an app that tracks your location and allows you to self-check your temperature and report any symptoms during your quarantine period.

Next I went to another table on the right where I signed the order ensuring I comply with quarantine.

Then you go through passport control where they receive the other form, check which visa you have, take your fingerprints and picture and send you on your way.

Everyone was very cordial and professional. Just follow the rules and you’ll be fine (the penalty for non-compliance as of September 2020 is 10,000 USD or 1 year in jail).

Baggage claim and customs are the same.

When you exit customs you’re greeted by staff in full PPE to the right who check your destination and give you a colored sticker. They then guide you to the next step.

For those with tourist visas, you’re sent to the Incheon Airport Hyatt where you’ll be staying for 14 days (this costs around 127 USD a night and includes meals). A friend of mine did this in August and said it’s pretty nice. They feed you three meals a day and allow you to receive packages. The only downside was hearing the announcements for new arrivals on the loudspeaker 3 times a day in 5 different languages. The good news is you’ll have 76 days to enjoy Korea after.

For long-term visa holders and Korean citizens, staff escorted us to private buses for travelers entering quarantine. Since we were going to Cheongju, we had to take a bus to Gwangmyeong station to catch the KTX to Osong station. Two KTX cars were blocked off for people like us and we were escorted by staff and a police officer to make sure we didn’t go to other cars.

The whole process was seamless and we were never left alone, but didn’t feel like prisoners. It was very impressive given how the rest of the world is handling the pandemic.

Testing is done at the medical center in Cheongju. Medical staff wore full PPE and did the throat and nose swab from a booth. They put the swabs in different vials so they could test two samples in case of false negatives or positives. Also, they changed gloves after every test.

After getting group tested in Vietnam by what seemed to be volunteers, the nose swab in Korea was painless and I wasn’t worried about infection or inaccurate results.

We spent that night in a facility until the test result came back negative. Not the Ritz, but it counts as one night, so we’d only have to spend 13 more at the next place. Staff were friendly and professional here as well.

Test results came back negative the next morning (6-10 hour turnaround) and we were loaded onto a bus to our homes for the next 13 days.

A package arrived the same day with a ton of supplies including trash bags, disinfectant, thermometers, snacks, food, drinks and a bunch of masks. I was astonished at how much they’re doing to control the virus.

The package depends on the city. In Seoul, the budget ran out, so you’ll get the bare minimum. The CDC is headquartered in Cheongju, so maybe that’s why our quarantine care package was huge. Everything at this point was free of charge (including testing and facility stay) besides the bus and KTX tickets.

While under K-housearrest, a government worker checks in on you almost every day. You have to leave your app and GPS on at all times so they can see where you are. They get nervous if you turn it off or don’t answer the phone. Our caretaker is a very nice person, but very overworked.

You can’t take out the trash until the end, so make sure to keep food waste in a bag in the freezer, and don’t go too crazy with delivery food.

Delivery service in Korea is on another level now. They deliver groceries the next day, even when you order on a Sunday. We’ve been able to get fresh cuts of meat and vegetables to stay healthy through these apps.

Also, I got a chance to try out the air fryer I’d been hearing so much about. The hype is real.

All in all, I was surprised at how well they managed things. Korea has its share of problems, but they can accomplish anything when they want to.

You can find out more info on traveling to Korea at https://blog.feedspot.com/korea_travel_blogs

Let us know what you think.

Traveling during the pandemic is not a good idea. But sometimes life forces your hand.

Let us know your experience traveling during the pandemic below!