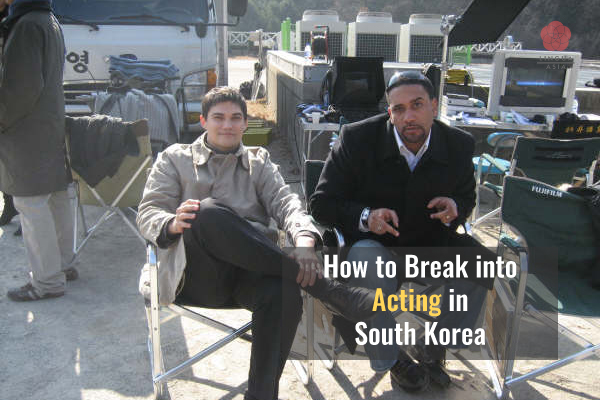 Acting in South Korea is a fun way to fast track your career.

Just avoid some easy-to-miss pitfalls and you’ll be fine.

I worked in show biz in South Korea for a few years.

Here’s what I learned.

How I got into acting in Korea

After a few months in Korea, I got on an F visa and answered an online ad for foreign extras.

The shoot was for a movie called, “My Father” starring Daniel Henney.

When I showed up to the subway station where we were going to be bussed to the set, I was met with a veritable rouge’s gallery of expats from all backgrounds lurking around.

The main three groups were Russians, Nigerians and the Anglosphere (Americans, Canadians, British, Australians and New Zealanders) who mainly stuck together due to ease of communication.

It was rough but tons of fun and I met cool people from all over the place.

After that, I was hooked.

Fun facts about acting in Korea

You’ll have a lot of downtime and often work longer than expected, so bring something to do

I met many famous celebrities who I hadn’t heard about, but were huge to my Korean friends.

I went to movie premiers, wrap parties and actors’ homes to teach them English.

It was great, but I wanted better roles than English teacher, soldier or thug/bodyguard.

In my free time, I practiced Korean until I could remember lines and emote while speaking them.

After a few years, I finally got a decent part on a popular show. Unfortunately, the director didn’t like my look or attitude for the part.

It also didn’t help that I was flirting with the main actress.

What can I say, it was the folly of youth.

The next day a random dude showed up on set and was rehearsing my lines. It turned out they recast me without telling me.

I was less-than-thrilled since I thought I had finally gotten a big part.

In all fairness, I had no one else but myself to blame. It was my lack of respect for the craft and my coworkers that got me fired.

Why I stopped working as an actor/model in Korea

I enjoyed my few years of living the show biz life, but it wasn’t going anywhere.

I was getting the same English teacher, soldier, and bodyguard/thug roles.

Korea is 97 percent Korean. Those roles are the extent of their interaction with westerners.

On a personal note, I didn’t enjoy waiting around 6 hours to act for a few minutes.

My agent would always have me show up to an empty set at 6am. We’d wait for the crew to arrive some hours later only to shoot after lunch.

Why you should try acting or modeling in Korea

Things have changed since I did it in the late 2000s.

There are more opportunities for non-Koreans in entertainment.

From talk shows to game shows, you can make a name for yourself quicker than you can in Hollywood.

You have more options like starting your own YouTube channel and building a local following (Koreans watch some YouTube and love seeing foreigners speaking their language.).

How to audition for acting in Korea

To be honest, you won’t have many auditions in Korea.

I can count the number of auditions I did on one hand.

Filming schedules in Korea are hectic and foreign actors are an afterthought (remember that cringy VIP scene in Squid Game? Yeah, those guys didn’t even know what role they were playing.).

It’s common for casting directors to call up your agent the day before filming your scenes.

I would often show up on set and do my lines for the first time on camera.

This is true for Korean actors as well. When one couldn’t do their lines properly, they would recast the role right then and there.

These come and go so frequently that by the time I’m done writing about them, it will be outdated.

Go to the Facebook “Acting and Casting in Seoul” Group and start answering calls. You’ll meet some shady characters and a few honest ones.

How much will I be paid acting in Korea?

The reality is that film studios pay about a grand per actor, but the agents pocket the lion’s share.

Labor rights are still in their infancy in Korea. Things like studio contracts are normal just like in Hollywood during the Golden Age of film.

I knew a few foreign actors who signed bad contracts and were worked non-stop to pay off their “expenses” like food, clothing, acting lessons, transportation, management fee, etc.

There are some university classes and improv groups/clubs.

Daehakro is known as the theater district in Seoul. Check out some performances and network with the actors.

Otherwise, it’s better to go home to get trained.

Things to know about acting in Korea

Reputation is everything, don’t make waves and respect your coworkers.

The tactics in “How to Win Friends and Influence People” work here. Never criticize or question directors or others in position of authority in public (or in private unless you’re really cool with them).

Don’t work for free. It’s expected that you will be exploited in order to become famous. One manager I knew worked for six months and didn’t get paid. Don’t accept this. I’ve never been stiffed, but it happens.

Don’t leave money on the table. Make sure your agent pays you, and ask for overtime. They might give you a little less but it never hurts to ask.

Don’t do low-budget stuff like “Surprise” unless you’re desperate. Once or twice is fine, but you’ll never be taken seriously if you become a regular.

You’ll get a lot of random roles like “frightened inmate #2”. Use them as opportunities to hone your craft. You would need a ton of connections in Hollywood to get speaking roles like this so quickly.

Clear your schedule or expect to work overtime. I’ve done shoots that were supposed to be one day that turned into two. They just put us up in a love motel where we had to share a bed with someone we met that day on set. I made some good friends that time so it wasn’t that bad.

Managers in Korea are like a combination of agent, gofer, driver, and assistant. They do everything from chauffeuring their actor/actress to reading scripts and getting them work.

If you find a good honest agent. Take them out to lunch or coffee and get to know them. They’re worth the effort.

Take matters into your own hands. Start acting in Korean on your own YouTube channel and grow your subscribers. This will give you more leverage and opportunities in the country.

Image is very important for celebrities in Korea.

One scandal can end or seriously derail a career for years.

Delete any social media content that might be considered “___ist” if you plan on working in entertainment.