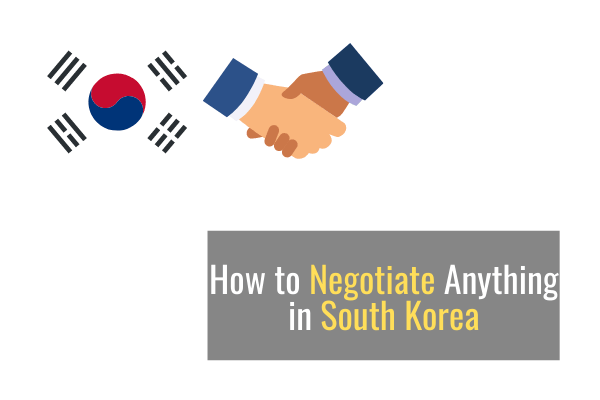 This step-by-step guide shows you how to negotiate salary and business terms in Korea.

I’ve been running a business in Korea since 2013. Here’s what I learned.

Let’s dive right it in!

It’s been said that everything is negotiable.

The same principle applies in Korea with a few adjustments. This guide will explain how and what you can negotiate while building long-term relationships.

It covers common situations when asking for more makes a big difference.

Time, money and quality are the three main things you can negotiate. Knowing which ones are important to your counterpart will allow you to make adjustments.

For example, speed tends to be important in Korea. My translation business uses pricing that takes this into account. The faster the turnaround time, the higher the price we charge.

Here are a few ways to increase your chances of success:

My Experience Negotiating in Korea

I worked part-time for a recruiting company for a few years and had a close relationship with the owner. It was a medium-sized company of around 100 employees.

I negotiated a salary of 7 million KRW per month with the owner to start working full-time. That night, I received a call from her right-hand man telling me to accept 5 million KRW, because she consulted with her husband who said the original amount was too high. The reasoning was that other employees would want more money.

I took this personally as you can imagine. I understand now that this is how things are done. A deal and even a contract are considered living organisms that can change.

I could have played hardball and threatened to walk, but that was still a good salary at the time. In hindsight, I should have asked for more vacation time or a larger year-end bonus. Long story short, I took the 5 million KRW and was the highest paid person at the company for the 5 years I worked there.

More about living in South Korea as an Expat

After I started a business in Korea, my partner and I cold called potential clients and set up meetings. I made many mistakes, but being late and not bringing a proper small gift were instant fails.

I found that the best way to get them to try us was to show briefly what we did well, while focusing on their company and what their goals were. Listening carefully was key here.

Most of our clients were extremely busy and needed translation on-time and error-free. We accommodated them by being low-maintenance and always delivering on-time.

The majority of our clients were great and we still work with them today.

The most difficult ones were from large companies who asked for discounts in the first meeting. They sent us files with 5-hour deadlines that didn’t allow for proper quality control. It was necessary to terminate these partnerships after a few months. I learned that it’s important to cast a wide net when it comes to doing business in Korea.

Read on to find out more about negotiating in different situations.

Salary Negotiation Tips while Applying for Jobs in South Korea

Most jobs are listed with a salary range (for example, 1.9 million to 2.1 million KRW a month). You always want to ask for the highest amount.

If you present yourself well during the interview, you’ll have better leverage to ask for more money.

More about Interviewing in South Korea

Asking for a Raise while Working in South Korea

Most jobs have built in raises every year. You’ll want to receive as much as possible. Asking is half the battle.

If your performance is above average, you’ll have better leverage to ask for more money.

More about Jobs in South Korea

Adam Smith is going to Korea to find a bidet supplier for his medium-sized import/export business in the Midwest. He wants to get the lowest price possible for 1,000 bidets a month.

He contacts a large Korean company who agrees to meet with him. He goes alone to the meeting while the Korean company sends three people, a senior manager, a junior employee and a new hire who studied in the U.S.A for a year.

Adam doesn’t bring a small gift. He tries to negotiate price in the first ten minutes, which his counterparts interpret as desperate and borderline rude.

They end the meeting early and Adam is given the run around for the next two weeks ending in failure.

Read on to see what went wrong.

Here’s what to expect during Korean business negotiations.

Which language should I speak while negotiating in Korea?

Unless you’re very comfortable in Korean, English will give you an advantage.

When is the best time to ask for a salary raise in Korea?

Near the end or beginning of the year at most companies. Some companies have raises in July or a year after you’re first hired.

Who should I ask for a raise in Korea?

It depends on the size and structure of the company. Your immediate supervisor or someone in management whom you have a good relationship with.

What should I avoid during negotiations in Korea?

These are some common mistakes when negotiating in Korea:

Negotiating is a challenging but necessary part of doing business in South Korea.

Let us know your negotiation tips in the comments below!