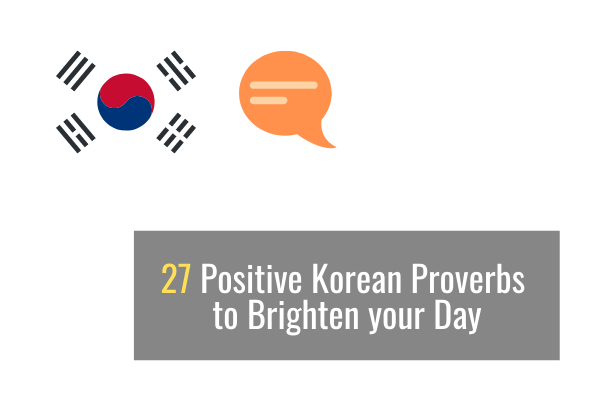 This post covers the best Korean proverbs to inspire and motivate you.

The sayings are organized by theme.

Koreans have been through a lot in the last few centuries. It’s no accident that they have many proverbs designed to give you hope.

In tough times like these, we can gain inspiration from Korea’s ability to make things work.

티끌 모아 태산: Many a little makes a mickle. (Lit. Dusts gathers to be a tall mountain.)

하늘이 무너져도 솟아날 구멍이 있다: There is always a way. (Lit. Even if the sky falls, a hole will spring up.)

오늘 걷지 않으면 내일 뛰어야 한다: If you don’t walk today, you have to run tomorrow.

배움에는 왕도가 없다: There is no shortcut to learning. (Lit. There’s no royal way of learning.)

어디든 가치가 있는 곳으로 가려면 지름길은 없다: There are no shortcuts to any place worth going.

백지장도 맞들면 낫다: Two heads are better than one. (Lit. A piece of paper is easier to carry when lifted up by two people.)

개같이 벌어서 정승같이 쓴다: Narrow gathered, widely spent. (Lit. One makes money like a dog and spends it like a minister.)

Let’s Hear from You!

Koreans have many proverbs to fill you with optimism.

Let us know your favorite proverb in the comments!