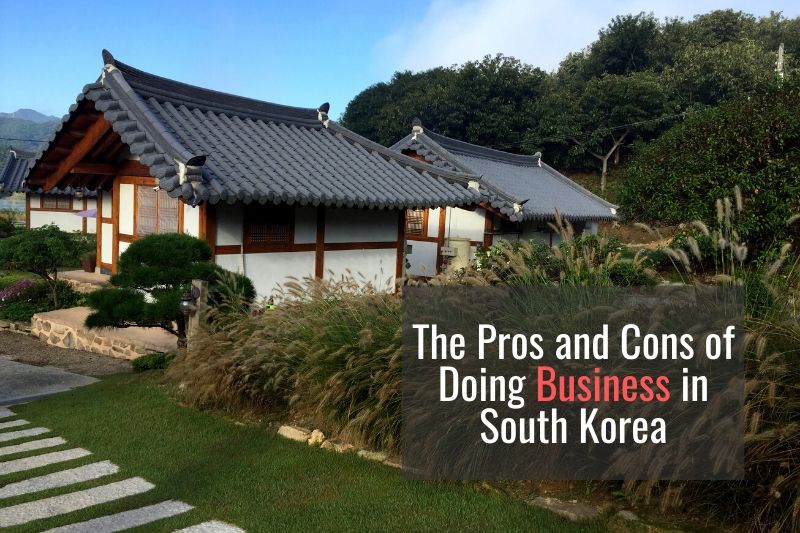 This guide will show why you should or shouldn’t do business in Korea.

I researched the pros and cons before starting a business I’ve been running since 2013.

South Korea can be a great place to expand to.

It can also be difficult if you don’t know what to expect.

More about Starting a Business in Korea as an Expat

Learning the challenges you might face can make a big difference.

Korea has modern and well-maintained infrastructure that makes logistics a breeze. It also has some of the fastest internet speeds in the world. You won’t be fighting an uphill battle to communicate or transport goods.

A culture of getting things done

When Koreans set their minds to something, it gets done. You might find yourself being the bottleneck sometimes.

Korea is one of the most connected countries in the world with the highest literacy and secondary education rates.

You won’t have to worry about communicating value to customers there.

Korean culture is based on food. There’s a saying that goes, “everything begins with a meal”. Businesses that understand this thrive.

Korea has 9 cities with over a million people. This makes it easier to access customers.

Located between Japan and China, Korea provides an optimal location to gain a foothold in Asia.

Koreans are known to be interested in overseas products and have a high demand for them. Trends are very important and can spread like wildfire.

These include economic free trade zones and tax rebates.

Koreans have one of the highest average incomes in the world and a strong consumer culture. Needless to say, the minimalist trend did not last long there.

The cost of living in Korea is surprisingly high and continues to rise.

They’re willing to pay a premium for goods that are considered luxury.

Koreans love numbers. They have mastered loyalty programs and hunt for related discounts.

The average Korean will have loyalty and rewards accounts with every store in town, including bakeries, cosmetics, shops, convenience stores and movie theaters.

These entail collecting points on every purchase to be redeemed later.

This can be an advantage if you understand the system.

Potential to distinguish your business

Since Chaebol companies tend to dominate many industries, you’ll find opportunity in the lack of diversity.

Korea has generous Free Trade Agreements with the U.S. U.K. and E.U. This makes it easier to sell some products there.

Diverse market with a variety of industries

Korea has one of the largest shipbuilding industries in the world as well as leading solar energy technology. There’s practically a place for any business type.

This one really depends on the situation.

It complies with the World Trade Organisation, and even updates IPR laws to protect emerging fields, such as electronic commerce and trade secrets.

Experiences may vary so make sure to do your research.

Chaebol are very powerful conglomerates. In fact, they make up 67% of the GDP.

Koreans have a love hate relationship with them. Chaebol are both credited with building the economy after the Korean War and holding it back now.

They are well-established in the country and can move mountains to get their way.

Depending on your industry, it’s important to either partner up with them or fly under their radar.

Korean business culture is based on Confucianism and military hierarchy.

Understanding this can make your business venture a lot easier.

Trends can die down in a few years if you aren’t careful.

Everything from street food to even neighborhoods can go from boom to bust in a few years.

Churros were a huge business in 2014 with lines stretching around the block. Copy cats even sprung up like mushrooms in the area.

Now, these stores have all but disappeared and the neighborhood is very quiet.

Once a store or neighborhood becomes popular, there’s a risk of landlords jacking up the rent or evicting it so they can open the same one.

It’s important to have an ironclad contract to prevent this or plan for it.

One need look no further than the case of Uber.

They tried to open up without permission and were driven out.

You must play ball with the government if you want to succeed.

They will be careful with low priced items and splurge on expensive ones without hesitation.

For example, it’s common for Koreans to fly LCCs and then stay at a 5-star hotel.

They will buy groceries online for the lowest price, then line up at Channel for the newest brand bag.

It’s important to understand these patterns by doing research before pricing your items.

If you have a hit business idea, you can expect some doppelgangers to come out of the woodwork.

You must stay a few steps ahead of such businesses.

The rising costs of living and educating a child are driving birth rates down, while the population continues to age.

This will create more challenges in the future.

There is so much paperwork and archaic filing that you might have to invest in one or more dedicated staff members to sort it all out.

This is especially true if you receive government aid.

Surveyed homes to see what people wanted. They offer affordable meal options and places for kids to play. Free pencils also didn’t hurt. Furniture is very expensive in Korea, so the reasonably priced options Ikea provides is well-appreciated. They were also lucky enough to arrive right when Scandinavian design became trendy in Korea.

Partnered with Samsung Card initially and then moved to Hyundai Card. They source many items from local businesses as well. But their secret weapon was unlimited onions and mustard, which Koreans use as Banchan, or side dishes. Korean Costcos are the most profitable in the world.

Partnered with Shinsegae to make use of their local resources and expertise. Understands local coupon culture and desire to collect limited items.

They committed the cardinal sin of not offering food at their stores.

It also didn’t help that their location was outside the city and didn’t provide shuttle service.

Or that they only sent French managers who didn’t speak English or Korean. Workers went on strike often and the overall takeaway for Koreans was that Carrefour didn’t understand Koreans.

Also, the displays were not aesthetically pleasing to Koreans.

Didn’t localize stores and was slow to adapt. Assumed that they had a one size fits all solution.

Doing business in Korea comes with its own unique set of challenges and opportunities.

After a decade of running a company there, I can say it’s worth it. Even with the occasional frustrations.

I’m fortunate to have a driven group of loyal customers.

Experiences vary greatly by industry, so do your research before starting a business.

Let us know what you think are the pros and cons below.