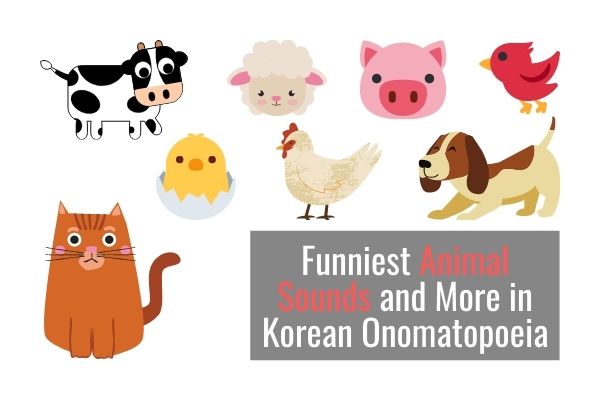 Onomatopoeia are tons of fun. You can find them in children’s stories, comic books and in everyday conversation. As any parent knows, kids really love them.

You just have to be young at heart to enjoy them.

Korean onomatopoeia (의성어) are even more fun for English speakers. It’s hilarious to compare what a cow sounds like in the USA vs Korea.

Here are a list of Korean onomatopoeia and animals sounds that are sure to brighten up your day.

I love comparing onomatopoeia (의성어) because they’re so funny in other languages.

This post also covers object and people sounds along with neat sounds that don’t exist in English.

Onomatopoeia (ονοματοποιία) is a super long Greek word that’s a combination of onoma, meaning “name”, and poiein, meaning “to make”. It actually came to English through Latin.

Think of them as words that imitate the sounds they describe.

Onomatopoeia are cultural and differ around the world. It’s only when you start learning another language you realize how cute they are.

Learn the Most Common Korean Words and Phrases

Even though you don’t hear onomatopoeia everyday, they’re a great ice breaker and way to study Korean.

Korean animal sounds are my favorite to compare with English. They’re usually so different (except for the pigeon sound). Onomatopoeia shows how much language and culture shape our worldview.

So much onomatopoeia, so little time

Did you know there are many animal sounds in English for a dog barking? You probably did, but weren’t thinking about it. You’ve got bow wow, ruff and woof woof. There’s only one dog sound in Korean, meong meong.

There are also a few sounds cat makes. Mew, meow and of course purr. In this case, Korean is easier. There’s only one cat sound, yaong.

And for frog sounds, we’ve got ribbit, ribbet and croak. But in Korean, there’s only gae-gul-gae-gul.

And for birds, we’ve got tweet and chirp. But in Korean, there’s only jjeck-jjeck.

Why are Korean and English onomatopoeia so different?

Maybe because English and Korean have different vowel sounds as well as cultural backgrounds. The concept of a dog for example is different to Americans and Koreans.

It also might just be because the first person to hear a dog bark in Korea thought it sounded like meong meong. And everyone else ran with it.

This is really where Korean and English start to really show some differences. There are many human actions in Korean that have accompanying onomatopoeia that don’t exist elsewhere.

Teaching a child language is super easy with onomatopoeia. Nothing is more engaging for kids than sounds. Try singing the next time you want to get your child’s attention.

Mimetic words (의태어 or uitaeeo) are special. They’re similar to onomatopoeic words but instead of describing sound, they cover different types of movement. You can find these descriptive words all over the place in Korea from billboards, TV drama scripts to Webtoons. They add a lot more depth and imagery to Korean writing.

I want to hear from you.

Let us know which Korean onomatopoeia are your favorite!