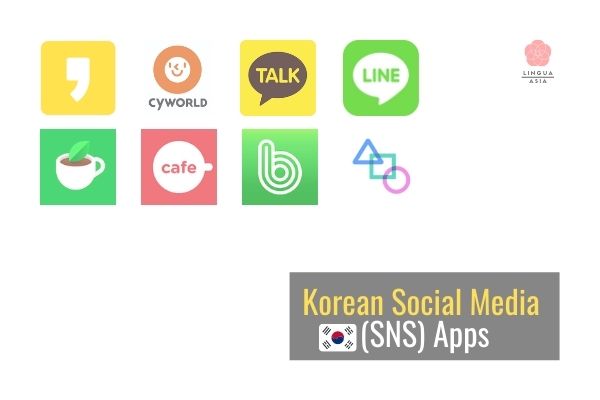 Get some, with Korean social media apps!

Apps are like friends, you can never have too many!

Here are the top 8 social media apps/platforms that every Korean knows and loves.

I may not have been born using apps, but I have way more of them than friends these days. (totally blaming the pandemic here)

SNS stands for Social Networking Service, which refers to “social media” in South Korea as one of those neat Konglish words.

Koreans usually say “SNS (에스엔에스)” when they talk broadly about social media without specifying an app.

And do they ever!? Koreans have the second highest social media usage in the world. Koreans love to compare and what better place than social media where everyone accurately portrays their lifestyle?

When locals want to be specific, we just say the name of an app, but shorten it like “Insta (인스타)” for Instagram, or “KaTalk (카톡)” for KakaoTalk. (●’◡’●) Super kewl.

KakaoStory (카카오스토리) is a social network platform launched by Kakao (as you might have guessed) in March 2012. It’s microblog/photo-oriented social media.

It’s a great way to stalk your classmate who you’re not comfortable following on Instagram or friending on Facebook!

I like it because they haven’t changed the algorithm to keep you doom scrolling for hours. Posts are still in chronological order and when you reach the end, you’re done!

Along with Naver Band, KakaoStory has an extremely large number of users in their 40s and 50s. Half of Koreans (40s-50s) use this app, whereas teens and 20s rarely do. But still, KakaoStory occupies more than 30% of social media use frequency in Korea.

It’s like Facebook for middle-aged people. If you want to see what a mid-life crisis in Korea looks like, check out KakaoStory! Hint, it’s not what you expect. There’s a lot of hiking/mountain photos (flowers too).

Cyworld (싸이월드) is a microblog platform launched in 1999. Think of it as the MySpace of Korea!

It was an iconic and unrivaled social media service that led the internet culture of South Korea in the mid to late 2000s. Ahh the good old days (❁´◡`❁)

Cyworld offered a “미니홈피 (minihompy)” as in “mini home page” that you could decorate as your blog or diary. Sound familiar?

Back in the days, Koreans were serious about decorating minihompy as well as their minime (avatar) and BGM (background music) to represent themselves online. People bought those with Cyworld’s own currency, acorn (도토리 or dotori) and had followers/friends as “ilchon (일촌)”. Very cute!

In the 2000s, Cyworld reigned as the absolute powerhouse of Korean social media. But in the 2010s, it failed to adapt to the smartphone era and disappeared as it gave way to Facebook.

I remember literally all my friends used Cyworld, then slowly migrated to FB around 2010. As many Koreans miss the simpler times of Cyworld, it resumed its service in 2022.

KakaoTalk (카카오톡) is a must-have mobile messenger in South Korea, launched by Kakao in 2010.

KakaoTalk has about 45 million monthly active users (pretty much every Korean), and even my grandma in her 80s uses it.

Koreans use “Group Chat (그룹채팅)” in KakaoTalk to make announcements or hold meetings at universities or companies. Even government or public institutions deliver notices to the general public via KakaoTalk. It’s completely taken over daily life and society of Koreans (they have a bank, seriously). Hopefully it doesn’t turn evil (⊙_⊙;)

You can also call it “KaTalk (카톡)” to sound hip!

You can send gifts via KakaoTalk on someone’s birthday or graduation.

KakaoTalk also offers “FaceTalk (페이스톡)” where you can video chat with your family and friends without paying a single won. It’s handy when you can’t use FaceTime.

It can be hard to make new friends in South Korea. You can try “Open Chat (오픈채팅)” to meet people who share your hobby or even age. Just be careful of nutters as it’s anonymous.

You can sign up with an ID or Facebook account without a valid phone number. The main feature is cute emoticon characters, which were neglected in other messenger apps in the past (until KakaoTalk launched Kakao Friends).

Most Koreans use KakaoTalk as their main messenger, and Line as the secondary. The 3 most active countries using Line are Japan, Taiwan and Thailand. Psss, most people think Line is from their country, but that’ll be our little secret *wink*.

During the 2011 Tōhoku earthquake and tsunami, Japanese people used social networking services to check on each other because phone calls weren’t working. From this incident, Lee Hae-jin, a cofounder of Naver, came up with an idea and gave a development order to NHN Japan. After that, Line became a turning point for Naver in Japan.

Maybe because of this backstory, Line is known for its stable server unlike KakaoTalk, which has server problems during earthquakes or other events.

The service started in December 1999. Currently, it’s one of the most prosperous online forums in Korea with huge influence and reach. Naver created their own translation app that’s not too shabby.

You’ll need a Naver ID, and join (sometimes level-up or 등업) to see all the info you’re looking for.

Naver Cafe has some pretty detailed travel blogs that document literally every 10 steps of a trip. Between you and me, I like to leave a little to the imagination, but some might appreciate the effort. The catch is, you need to speak Korean.

The most popular Naver Cafes are:

Daum Cafe (다음 카페) is another forum and community in South Korea launched by Daum in 1999.

Combined with Daum’s Hanmail service, it used to be popular, but not anymore due to neglected management and lack of moderation. Since the 2010s, most of the major online incidents involved Daum Cafe community.

It’s kind of like a more socially acceptable 4-chan at this point.

The most popular Daum Cafes are:

Hmm.. It seems more trouble than it’s worth, so I’ll stop talking about Daum Cafe. ಠ_ಠ

With a function to find alumni, Band users are able to find elementary, middle and high school friends they lost contact with. It became quietly popular among Koreans in their 40s and 50s.

Band is convenient for meetups through functions like bulletin boards, photo albums, chat rooms and schedules.

Band is often downloaded for “study” to prepare exams, such as civil service examinations, bar exams and other university studies. They put the fun in social media.

I use Band, but only for family. A group of my 26 family members (3 generations) share their whereabouts and keep each other posted. We go big in the countryside.

Are you looking to make friends or get lucky in South Korea? Whether to make new friends or find someone to simply share your hobby with, this app might be for you!

Somoim (소모임) is an app for offline club activities, launched by FriendsCube.
소모임 means “small group” or “meetup” in Korean.

Through word of mouth, Somoim steadily obtained small groups (clubs) and members. It’s mainly used by people in their 20s and 30s, but the age group is diverse.

It efficiently organizes regular get-together schedules by same region and interest as of today. About 1,000 offline meetups are happening every week through it.

I’ve never used Somoim before, but I might check it out cause I need new friends.╰(*°▽°*)╯

I hope you enjoyed this list of Korean social media apps.

Let me know your thoughts and questions in the comments!