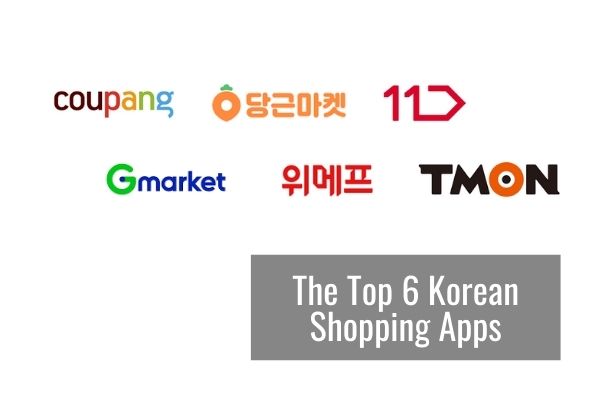 Need to get something from Korea yesterday?

This post covers the best ways to shop online in the land of the morning calm.

The apps and websites are categorized by which age group uses them.

Here are the 6 most popular ones and things to keep in mind while shopping online in Korea.

Shopping, apps and speed are kind of important in Korea. It’s only natural that there’s some amazing ways to splurge online with convenience and fast delivery on another level.

I love getting my shopping fix in Korea without leaving the house.

Most services offer non-contact delivery where they drop off items in front of your door and send you a text.

No need to worry about someone stealing your stuff too. There are CCTV cameras everywhere!

More about Shopping Online in Korea

What are the top 6 shopping apps most used by Koreans?

As of May 2020 based on monthly active users (MAU), the most popular apps are:

Coupang is not just a Groupon knockoff anymore. It was ranked first in Korea in every age group thanks to its rocket delivery, which takes less than 24 hours.

Coupang has pretty much everything under the sun at reasonable prices. It’s still looking to grow and is now searching for international talent to take it overseas.

※ Update (January 2023): Most of my Korean friends and I are using Coupang to order daily necessities, such as batteries, toilet paper, dish soap and even freshly roasted coffee beans! Coupang even offers a TV show streaming platform now.

Danggeun Market is the new kid on the block.

It has a clever name that stands for “당신 근처의 당근마켓 (dangshin geuncheoui danggeun market)”, meaning the market near you and also carrot in Korean. Danggeun connects buyers and sellers of secondhand items in their neighborhood or community.

It quickly increased its number of users by 182% in a year.

8 out of 10 of my friends started using this app to buy Starbucks Summer Ready Bags and Color Changing Reusable Cold Cups as they were a huge hit in Korea. Look for them to keep growing and adding new features.

※ Update: Danggeun Market items vary depending on your neighborhood. If you’re searching for secondhand luxury goods, try visiting rich areas like Gangnam or Cheongdam! You can use it like Pokémon GO, but for shopping. Yay!

11STREET is the old guard of shopping apps launched in February 2008, but is still improving.

They even teamed up with Amazon, so now you can give yourself a nice gift especially if you’re feeling homesick.

11STREET offers 우주패스 (woojoo or space pass) with many coupons and free delivery.

Gmarket is another OG of Korean online shopping and open market sites.

Founded in 1999 as a subsidiary of Interpark, acquired by eBay in 2009, and merged with Auction in 2011, and now operating as Gmarket Global Limited, it looks like they’re tossing Gmarket like a hot potato.

It remains to be seen if they can stay competitive with the shiny new apps that are all the rage.

It’s kind of random, but the founder is Heo Min (허민), the creator of Dungeon & Fighter (던전앤파이터 or 던파) game and the Goyang Wonders, the first independent baseball team in Korea.

He stepped down as CEO in 2013 but remains a major shareholder.

TMON is the first social commerce company in South Korea. The original name was “Ticket Monster”, but changed to TMON in 2017.

TMON was founded by Daniel Hyunsung Shin, who graduated from the Wharton School at the University of Pennsylvania and worked at McKinsey & Company, together with his college classmate and KAIST graduate.

These guys know their way around standardized tests!

What are the top 6 Korean shopping apps most used by each generation?

Korean teens use Coupang, ABLY, zigzag, Danggeun Market, StyleShare, and MUSINSA the most, which are mainly for fashion/clothing.

People in their 20s use Coupang, Danggeun Market, zigzag, MUSINSA, 11STREET and idus.

Koreans in their 30s and 40s use Coupang, Danggeun Market, 11STREET, Gmarket, WeMakePrice and TMON, which are mostly traditional shopping apps.

People in their 50s and above use Coupang, Danggeun Market, 11STREET, Gmarket, Home&Shopping and GS SHOP the most.

Besides the above apps, Market Kurly is pretty popular for buying groceries. It’s especially great if you live in Seoul or Gyeonggi-do since it delivers fresh goodies by 7AM the next morning.

Where to Buy Korean Groceries in the US

South Korea has some interesting cultural differences when it comes to shopping. These can save you money but also mislead you when buying something. See the ways to shop smarter in Korea below!

Living in Korea can be expensive, unless you use one of the awesome point systems!

They’re like mileage for daily purchases that you can use to get discounts.

The two main point cards I use are CJ ONE and HAPPY POINT.

Since CJ is a conglomerate, you can get points or discounts using a CJ ONE card at CGV (movie theater), Olive Young (cosmetic shop like Sephora), Twosome Place (café), Tous les Jours (bakery), VIPS (steakhouse) and so on.

You can sign up and receive a card at their affiliate stores or a mobile card through their app.

Happy Point owned by SPC Networks is great for F&B.

You can get points equal to 5% of amount purchased at Paris Croissant, Paris Baguette, Baskin Robbins, Dunkin Donuts or 2% at Shake Shack.

They also have a brand day for benefits like free donuts, coffee or size up (supersize) on specific days.

While I was shopping for furniture and home appliances online (or on apps) after moving back to Korea, I noticed that most sellers were advertising an “event”.

If you leave a review with a photo, they’ll send you a mobile (barcode) Starbucks coupon.

Since there’s no law prohibiting this in Korea, you’ll have to keep your eyes open and avoid “bought” reviews.

This also applies to food delivery apps because restaurants offer sodas or side dishes on the house for a review. I tried a restaurant with this event and it was really different from the paid reviews.

The three major telecom companies in Korea are SK, KT and LG.

They have their own membership programs where you can get benefits or discounts when shopping.

I can briefly talk about T membership since I use SK telecom.

SK even has a “T Day” each month offering awesome deals.

Might as well enjoy all these benefits since they’re given free for using their telecom service.

If you’re looking for a discount phone plan, check out MVNO and pay a fraction of your monthly bill.

Korea has a variety of easy-to-use shopping apps with blazing fast delivery.

Most are in Korean, but you can expect English versions as they expand abroad. Just try not to get addicted to them!

Let us know which apps you use in the comments!