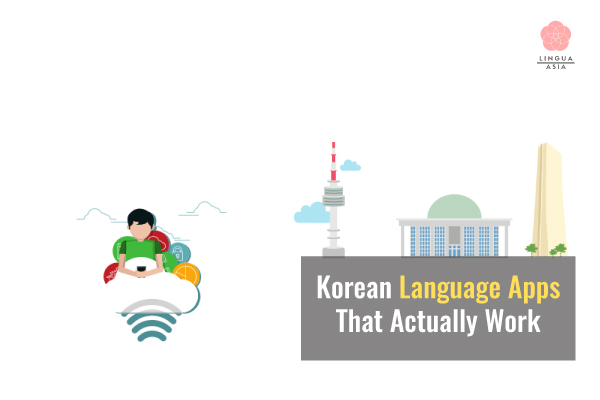 There are hundreds of apps that will teach you from the comfort of your smartphone. You can even learn Korean from a passive-aggressive cartoon owl. What an age we live in.

The problem is, which one’s right for you? Too many Korean language apps, so little time.

Learning Korean with apps is like going on a treasure hunt with pieces of a map. Each one tells you something, but won’t get you all the way.

I’m here to help put them together!

I’ve categorized these apps according to what they do best and labeled them by whether they’re free or paid and if they require human interaction.

I’ve studied Korean for decades and can swear at an eighth-grade level. To get this good, I’ve tried every Korean language app.

Find out which ones meet your needs below!

Best for Learning How to Speak with Humans

I admit I’m biased to heck and back over this one. Not only am I a Pimsleur affiliate, I’m a long-timer user. Check out my full review here.

Bottom line is, it works.

Pimsleur won’t win any style points, but it’s great at teaching you grammar and vocab in the most painless way possible. Each 30 minute lesson:

It’s the meat and potatoes of language apps that will get you conversational in Korean in 90 days flat. Pimsleur is especially great if you prefer self-study and don’t have time to schedule lessons with a tutor.

In order to keep up with the times, they’ve added more sections like “skills” practice. I find them to be more of a distraction than anything. You’ll get amazing results as long as you complete the core lessons.

If you’re going to Korea or want to impress someone at home, this is the one app that will give you the biggest bang for your buck.

Some of us prefer to learn languages from something with a pulse, but don’t have the time to get out there. Enter the scrappy up-and-coming app that specializes in Korean tutors.

They blend the best of both private lessons and structured curriculum. The tutors skew a bit older in age, but many of them teach Korean for fun and are eager to help you learn.

The app also has a placement test to show you where to get started.

Say is a great choice if you have some money to spend and are an extrovert.

Flashcards, but on your phone! Memrise is a spaced repetition app that uses flashcards to help you remember words and grammar rules. The free intro course has added awkward videos of random people exaggerating their pronunciation to accompany each card.

Once you upgrade to pro, you can create your own decks or use ones that others have made. I think it’s great for people who want to learn some vocab so they can understand conversations in K-dramas.

Price: Freemium with ads then $8.50/month

Perfect for those who like to mix business with pleasure, but don’t know where to get started. It’s language exchange, but on your phone!

The app connects you with native speakers you can chat with, exchange photos and audio messages, and even practice your speaking skills using video calls. The catch is, you have to teach them English.

While researching this post, I remembered that I made a HelloTalk account a decade ago and forgot about it. They’ve since upgraded features to include “serious learners” category where you can connect with active users.

There are a bunch of other categories such as location and gender that can be unlocked with a subscription. I think there’s potential if you’re a proactive person in a place with few native Korean speakers and are short on cash for private lessons.

For the studious ones among us who are gearing up to take the TOPIK test, check out the closest thing to their official app! It covers all the hits including Vocabulary and Grammar, Writing and Listening sections with copies of past exams.

It’s kind of jarring to use because you’ll answer the blandest grammar questions and then be forced to watch a spicy ad for a mobile game.

It does what it says though, so check it out if you’re going to take the TOPIK test.

One of my first attempts to learn another language was with “the Stone”. It didn’t take, but they’ve improved a lot since then.

The app uses images instead of English text to teach you Korean vocabulary. The idea being that you’ll start to associate words with pictures, just like how you learned your first language as a child. They use high-quality images and a slick interface to get you to retain vocab and grammar.

Using Rosetta Stone feels like trying to learn gymnastics by studying theory and mounting a pommel horse from multiple angles all day. But, it’s a great supplement to other apps and perfect for those who learn better visually.

With feature lists as long as a congressional bill, these apps are the jack-of-all-trades but master of none. They’re perfect for learning everything about Korean except how to use it.

If you ever wanted to combine language learning and Candy Crush, DuoLingo is the app for you! Like Rosetta Stone, it’s a polished app that covers a lot of bases. Unlike Rosetta Stone, it doesn’t excel at any of them. The app is also known for its overgamification and sassy owl mascot who will message you occasionally to shame you into studying.

I took the level test and got some interesting phrases that no person has ever spoken out loud.

The number of alerts, tokens and animations nearly gave me a panic attack before getting to the first lesson.

The style of Korean they teach is from 1950s experimental films.

Duolingo makes you feel like you’re learning a language without actually doing it. Kind of like playing Wii Fit and expecting to get abs. It’s better than nothing, but it won’t get you any meaningful results.

Price: Free with a ton of ads and alerts

Learn Korean from a cartoon parrot, which is totally different from the Duolingo Owl. With a catchy name, Learn Korean Phrases & Words is a language learning app that teaches you Korean through simple games and exercises. The app covers grammar, vocabulary and pronunciation.

The first screen you see lets you choose what you want to study, which is something I can get behind. From there things kind of go downhill since it’s basically a glorified vocab list with audio and a favorites list you can make with ads (seriously, the ads pop up even between every vocabulary word).

LKPW would be great for robots if languages could be learned by inputting word sequences. It’s kind of like a tiger mom made an app for their least favorite child to study Korean.

Price: Freemium and $4.99 for upgraded

Their tagline is, “learn languages smarter, not harder”. Between you and me, they probably should have worked harder on their mascot.

LingoDeer is pretty much the Asian language focused version of DuoLingo, so the quality of their Korean audio recordings and word choice are better. LingoDeer has a variety of activities to keep you engaged for minutes. Not as polished as say, DuoLingo, but the Korean is definitely a cut above. At the very least, it won’t send you backwards in progress since you’ll be learning practical Korean.

The first screen looks like the one on Learn Korean Phrases and Words, except you can’t skip ahead without taking a super fun test that feels like a TOPIK exam. The romanization of Korean words is off, which to be fair, isn’t reliable anyways.

Which paid Korean language apps should I use?

If I had to do it all again and money wasn’t an object, I would start with Pimsleur to get a nice baseline of conversation. This would allow me to get out there immediately and start talking to real people and even going on double dates (I wouldn’t risk one-on-one yet). Then I’d supplement it with Rosetta Stone to learn vocabulary and shore up anything that Pimsleur didn’t cover. If I’m outside of Korea, I would use Say to hire private tutors to improve fluency.

Which free Korean language apps should I use?

If I wanted to do it entirely for free, it would be Memrise or LingoDeer to learn vocabulary then HelloTalk to find language exchange partners. This has a much higher chance of failure, because you have to create your lesson plan and stay motivated.

So gather up these infinity stones of Korean language apps and snap your language worries away! Ugh.. sorry for that.

If you’re a Korean language app developer who would like to add their creation to this list, message me in the comments.