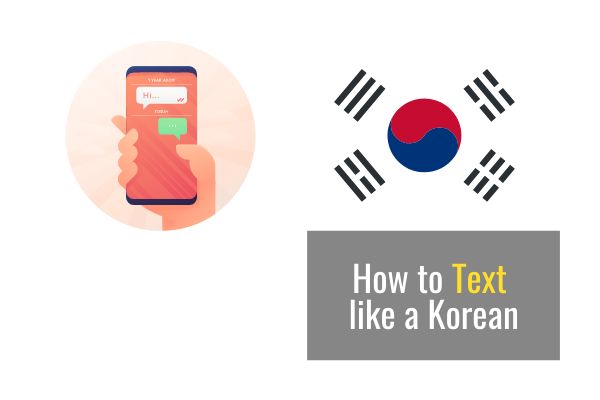 This guide will show you how to text in Korean.

It will help you make tons of friends and work better with others.

We’ll explain how to text both casually and formally step-by-step. There’s even some Korean texting slang to make you sound like a local.

Koreans text so much, they created their own app.

Voice messages are never used. (Introverts rejoice!) I’ve gotten only one in 10 years.

Korean cell phone plans don’t include many minutes (300 minutes is considered a lot), but tons of data (unlimited is preferred).

SMS, or traditional cell phone texts are usually reserved for emergency alerts, bill collectors, loan ads and spam. For everything else it’s a good idea to use KakaoTalk or Band.

Texting etiquette is a must if you want to be successful and have lots of friends in Korea.

The main Korean texting apps are:

KakaoTalk is the clear winner here with the majority of users.

After using KakaoTalk for a few years, I was surprised how basic WhatsApp was when I first tried it.

You can order food, send gifts, watch Kakao TV and make friends on Open Chat through KakaoTalk. It even has its own webtoons.

Needless to say, they spend a lot of time texting.

People also install KakaoTalk on their work computers and disguise it as an Excel sheet, so they can chat at work. But you didn’t hear that from me.

Like in other countries, never write anything in a text that you wouldn’t want plastered on the front page of the Korea Times.

KakaoTalk is great, but it doesn’t always protect the privacy of its users. They’re known to give up personal info when someone’s being investigated.

Koreans even have their own emoticons and abbreviations. Knowing these will help avoid misunderstandings and provide emotional context.

How to send casual texts in Korean

This walkthrough is for everyday situations like texting with friends, family, and romantic interests.

The following are often used in casual texts:

These seem confusing, but they’re fun to figure out. When in doubt, read the text out loud and you’ll most likely get it.

Korean typo etiquette is advanced, so don’t go off script with your own until you’re comfortable. Also, wait until you’re familiar with someone before attempting it or you could lose major points.

For example, girls will definitely dislike it when a 소개팅남 (a guy from a blind date) sends texts full of typos out of ignorance, instead of intentionally.

The most common ones you’ll see are:

For good morning or hi, repeat the same or similar. Otherwise, responses can be:

These are some common questions to keep the conversation going.

It’s not easy to end a conversation smoothly in any language. These are some safe choices.

How to send formal texts in Korean

This section is for formal situations like messaging potential employers, co-workers, clients(학부모) and your boss. There’s not much room for small talk in these situations, so you can follow the script closely.

Repeat the same. Feel free to add “네, (yes,)” before the phrase.

How to text someone you want to date

When dating in Korea, men are expected to text the same evening after a first date, instead of waiting a full day like in Western countries. Thankfully, no call is necessary because that would be awkward. Not doing this will send the message that you’re not interested.

People don’t always prefer the direct approach when it comes to texting. Being ghosted or “ghosting” as it’s called in Korea can be common. On KakaoTalk, you can easily block or hide friends. So don’t feel bad if it happens to you!

It’s also socially acceptable (but not preferred) to disappear for a few weeks and then reappear as if nothing happened. If someone does this often, it’s not a good sign.

Blind dates (소개팅) are common in Korea. Now, the person setting you up can send your blind date’s Kakao ID so you can chat/see profile pics before you even meet up. That way you can forgo an unnecessary date if the two of you don’t hit it off.

When you’re in a relationship, it’s an unspoken rule to message your significant other once every few hours. This is one of the main differences I’ve noticed between westerners and Koreans when it comes to texting. The message could be a simple update on what you’re eating, where you are or who you’re with. This can even be a deal-breaker for some women. Sounds pretty tedious, but you can find a happy medium.

If a girl wants to further the conversation, they’ll respond to texts in the same day. If they’re really interested, they can show it with aegyo.

A way to be cute and sometimes childish in Korean. It’s usually used by girls, but guys can get in on the action too. There are a few ways to show this through texting.

Still not sure what aegyo sounds like? Prepare yourself for the go-to aegyo test taken by K-pop idols on TV. This is aegyo in its highest form.

It means “I had a dream, it was a dream about ghosts. I was scared.”

😉 winking is done with Kakao emoticons or iPhone emoji.

:0 surprise is also done with Kakao emoticons or iPhone emoji.

^^; is a smiley face with sweat, meaning nervous or uncomfortable (like after being put on the spot).

Laughing can be shown with ㅎㅎ or ㅋㅋ.

Sadness is ㅜ or ㅠ but in light situations like your favorite cake was sold out.

For something really sad, use a crying face with ㅠㅠ or ㅜㅜ.

What level of formality in Korean do I need to use when texting?

It depends on whom you’re speaking with. Friends and romantic partners can text each other using casual rules.

Texting business contacts, coworkers, bosses and those older than you must be done with a high-level of formality.

What does ~~ mean in Korean texting?

You can think of these symbols as a way to soften the message. They’re often synonymous with lighthearted teasing or affection. It can also be associated with aegyo.

What does ㅇㅇ mean in Korean texting?

It means “yup” in a casual tone. You can also use it to lightly blow someone off and end the conversation if it’s used by itself in a response.

What does zz mean in Korean texting?

It means the same thing as it does in English, that the person is bored or sleepy. It most likely can be a typo of ㅋㅋ if they didn’t switch to hangeul before writing.

What does ;; mean in Korean texting?

This can represent sweat meaning the sender is nervous. It conveys moments of awkwardness too.

What does ^^ mean in Korean texting?

The symbols represent smiling eyes and is somewhat interchangeable with 🙂 in English.

How to say lol in Korean when texting?

The most common ways are ㅎㅎㅎ or ㅋㅋㅋ.

Let’s hear from you.

Korean texting is a lot of fun, but takes some time to learn.

Tell us your favorite way to text in Korean in the comments!