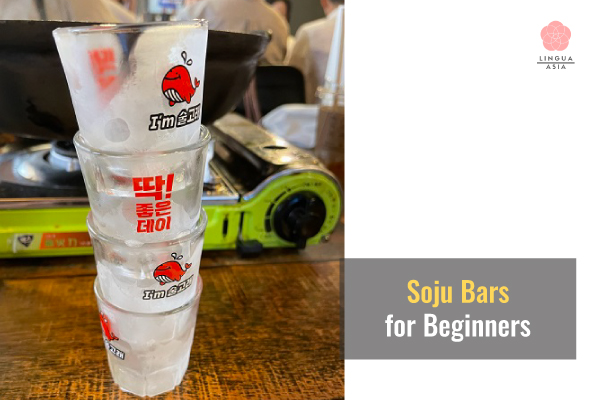 Looking for new and creative ways to get plastered?

Head on over to the nearest Koreatown and enter a soju bar. They serve drinks and side dishes (anju) that’ll change your perspective on what a night out means.

I’m going to cover some ways to fully enjoy a soju bar including:

What is a Soju Bar?

It’s a magical and festive place where you eat and drink until you can barely walk. The menu consists mainly of soju and anju, but places overseas offer local options.

Soju is a broad category of alcoholic beverage made from distilled grains. The mass-produced brands use sweet potato. The nicer, small-batch brands covered later are made with fermented rice.

Anju are delightful side dishes that accompany adult beverages in Korea. They’re so good that you’ll want them even when you’re sober.

Soju bars abroad are nice blends of Korean and local drinking culture that’s just the right temperature if you want something new but familiar.

I grew up going to soju bars in Garden Grove and Los Angeles. They were the only places that didn’t card me. And decades later, here we are.

What are the types of soju bars?

There are a few in order of fanciness.

Why do Koreans go to soju bars that serve anju?

In Korea, you’ll see them on the walls. If they do bring a menu, it’ll be just one that you’ll have to awkwardly share with your whole party. This is usually because the oldest (the one who will be paying) tends to hold it and decide somewhat unilaterally what to order. Also, the menu is a lot shorter than it is in places like the states.

In other countries, you’ll get a menu, sometimes separate ones for food and drink. There will be a selection of soju drinks and food.

Food menu will have a mix of Korean and fusion along with some local fare.

Places in Koreatown will have things like chicken wings and nachos. I recommend sticking with the Korean dishes, because they’re designed for soju.

What soju should I order there?

Hite Jinro makes the majority of soju you’ll see, mainly the little green bottles. It’s actually the number one selling alcohol brand in the world. There’s a few new brands on the block to check out. Here are the soju types to be aware of:

Soju is different in other countries like the US. The good news is, there’s more top shelf options in the states and abroad including Jinro Limited, which isn’t available in Korea.

There will be a selection of soju cocktails. In Korea, it’s common to drink it straight up. In Koreatowns, they call that kkang soju and is far less common. Most of my friends in Garden Grove drank lemon and yogurt soju. Straight up soju was for when you meant business or just broke up with someone.

You can also try somaek which is a combination of soju and beer or poktanju which is a shot of soju dropped into a pint of beer.

Most will order soju concoctions with fruit or yogurt abroad.

What anju should I order there?

There’s an anju for everyone. Decide whether you want something spicy or non-spicy first. The rest is a matter of choosing meat or non-meat dishes.

Step 1. Approach the host/hostess and tell them how many are in your party.

Step 2. Choose to sit at a table or in a private booth (you might be required to order a bottle of spirits or set).

How do you enjoy soju bars to the fullest?

1. Pace yourself: you don’t know how your body will react to soju. It hits different.

2. Training wheels: Start off with the mixed soju to ease into things. Yogurt soju was a personal favorite of mine when I was starting out.

3. Choose rice: the little green bottles are fun for a few goes, but they’ll leave you feeling like you got hit by a soju train. Andong soju made from rice is a much kinder mistress.

4. Avoid speakers: at the risk of sounding like an old man (I kinda am), many places tend to blast music. Tinnitus is real and it’s no fun.

5. Follow tradition: it’s almost law that the person opening a bottle of soju must grab it by the neck and swirl it to make a tiny soju whirlpool or tornado.

6. Use your elbow: then they must tap their elbow into the concave bottom of the bottle to make a satisfying thud. Why you may ask? No one knows, but it’s just how it’s done!

Seriously, I’ve asked some lifelong soju drinking ajeossi and they say it’s just for fun or to mix the sediment at the bottom which doesn’t exist.

7. Play the game: there are tons of Korean drinking games but the easiest one is “flick the strip”. There’s always a metal strip dangling off the cap after you open a bottle. One person stuffs a napkin in the cap (more on this later) and twists the strip until it’s straight. Take turns flicking it until it flies off. Whoever wins makes the two adjacent people drink.

8. Play the follow up game: the person who won the last game looks at the bottom of the cap at the secret number. Everyone else takes turns guessing while the flicker gives hints if the number is higher or lower. The person who guesses correctly makes the two adjacent people drink. That’s good clean fun for everyone.

9. Order a few rounds: take your time to get the night going.

10. One-upmanship: If someone asks you how many bottles of soju you can drink, it’s customary to say “one more than you”. Don’t blame me for what happens next though.

11. Afterparty: the soju bar is like the next stop after dinner on a five-stop night The next stop would be noraebang or club depending on how you’re feeling. Cap off the night at a haejang-guk place to ward off your hangover.

Is it worth getting a set at a soju bar?

It depends on the numbers. How long you’ll stay vs the total price and quantity of drinks and anju you’ll get.

It also helps to divide the price by number of bottles and dishes it comes with to see if you’ll actually save money. A little bit of math goes a long way.

Sometimes a set comes with a private booth in the VIP section, so that’s pretty cool.

What else can I do in K-town?

Where can I find soju bars in the United States?

Soju bars are just a K-town away.

Let us know your thoughts or questions about Soju bars in the comments!