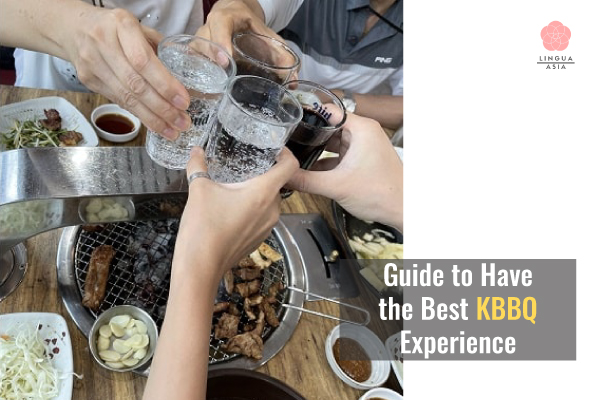 Nothing beats grilling and not having to clean up after. Except when you add some bottomless side dishes, tasty stews, ice cold booze and a kind but firm Korean lady to help out when you’re doing it wrong.

KBBQ is the backbone of Korean civilization. It’s more than just a meal, it’s a total experience that delights all the senses.

Whether you’re in the mood to celebrate or it’s just a Tuesday, you can’t go wrong with KBBQ.

KBBQ is huge in the U.S.A., U.K., Canada and Australia, so you’ll have no problem finding a place.

Here are the ways to experience them to the fullest.

Ask yourself what you’re in the mood for. There are a few things to consider when choosing a KBBQ restaurant.

There are two types of KBBQ restaurants:

KBBQ restaurants in Korea often specialize in one type of meat and cut. For example, some mainly serve samgyeopsal (pork belly). You’d go to a specific place to get what you’re craving.

In the states, they tend to offer a variety of meats and cuts. Most places serve beef, pork, chicken and seafood in different marinades.

There’s also different types of heat sources. They each provide their own flavor and cooking time.

For the full experience, I recommend the floor if it’s available. You take your shoes off and sit cross-legged on mats (it’s a great way to see who’s wearing lifts too). Fancier places will have little floor chairs with a back rest. A few have a recess in the ground where you dangle your legs. I switch between floor and chair, but there’s something intimate about sitting on the floor.

Also, don’t be shy to ask for a private room if you have a big party for the VIP experience.

You’ll find no shortage of useful and novel accoutrements at a Korean BBQ place. Use them all for the full effect.

Some places even have drawers for utensils.

The most important items are:

Things get lively throughout the night and you’ll be sitting in a splash zone before you know it. Use one of the adorable aprons to protect your clothing.

KBBQ places use ventilation systems but they don’t always remove all the smoke. The vents that get closest to the grill do the best job.

Some places have empty stools you can put your coat and bag in to prevent them from smelling. There’s often a bottle of Febreeze to help out at the exit. Very cool indeed.

If you’re feeling overwhelmed by it all, ask for help. Whether you’re unsure of what to order and which drink to pair it with, or you don’t know when the meat is done, the staff will be eager to assist. Push the nifty call bell for the best results.

They grill up most types of meat in Korea, so choosing can be a bit daunting. Fortunately, there are two categories that can narrow things down a bit. They are salt and marinade. So you can eliminate half the choices by just deciding whether you want savory or sweet and savory.

If you want both, the correct order to cook and eat them in is saeng gogi (plain) first, followed by yangnyeom (marinated).

From there, you can simply try a few cuts out to see which ones you like best.

They have some pretty strict rules about which adult beverage goes with what in Korea. That being said, you can follow their suggestions or do what you want.

In general, Korean will eat meat with soju and beer. Korean beer tends to be a bit watery so they’ll often combine the two into a boiler maker called somaek.

Chicken is best combined with beer and pork goes well with soju or somaek.

For those who don’t drink, cider or cola will work just fine.

9. Do the garlic right

Koreans literally have a foundation myth based on garlic. It’s that important.

You can always throw the garlic slices directly on the grill, but they tend to get burnt or fall into the flames. The more experienced ask for a maneul jongji (mini stainless steel sauce bowl) so you can heat them up evenly in their own juices. Some places will give you a makeshift foil container instead.

Ssam is the Korean term for wrap. And boy do they have a lot of them. Use them to wrap up the meat, kimchi, ssamjang (mix of doenjang and gochujang), yangpa (sliced onion) and pickled namul (veggies) for a delicious and healthy treat. Here are a few of the more popular ssam types:

For the best results:

There are tons of dipping sauces you can pair with different meats. Many restaurants create their own signature sauces. The most popular ones are:

If you’re cooking on a mesh or metal grill, it gets charred after a few portions. Ask to change the grill every few cuts so you get clean, flavorful KBBQ all night. This is doubly true if you get the yangnyeong, because the sugar will burn quickly.

13. Get more side dishes

It’s almost mandatory that you ask for at least one refill of those tasty small plates of food. Some places will have a salad bar of sorts where you can grab more kimchi, ssam and banchan yourself.

The best side dishes to combine with the meat are:

Other banchan stand on their own or can be used as a pallet cleanser.

One of my favorite things about Korean food is that they turn one meal into two or three.

After the KBBQ feast is over, you can add rice (bokkeum bap), gim (laver), and other fun stuff to things like dak galbi to turn all those deep flavors into another dish.

Some places have grills with an “egg moat” of sorts for gyeran jjim. Other places add veggies to the moat. These get extra delicious because they soak up the fat from the meat.

After eating all that food, they’ll ask if you want even more food. This is usually something like naengmyeon (cold noodles from North Korea!). You can choose between mool (chilled broth) or bibim (spicy) for naengmyeon.

If this sounds like a lot, you’re totally right. But it’s worth the food coma.

When you leave you might notice coffee machines and an ice cream freezer. Those are fair game so complete the experience with them. I won’t tell. *wink*

When you sit down, they’ll start bringing out little dishes of food you didn’t order. Don’t panic! It’s all part of the plan and included in the price.

A fire bearer (it’s always an ajeossi in Korea) will bring the heat source and place it in the center of the table while telling you to “watch out”. You must always awkwardly make a show of dodging it by a few feet.

KBBQ includes social bonding aspects since it’s meant to be enjoyed with others (some places won’t even serve you if you come alone). There’s give-and-take during the process with some social hierarchy. The youngest tend to do the grilling while the oldest pays.

When someone (it’s always an ajumma in Korea) comes to change your grill, they’ll snatch the tongs from you and put the meat on the new grill or distribute it evenly if they like you.

You’ll be stuffed with course after course of meat, vegetables and rice while washing it all down with booze. Just when you think you’ve had enough, they’ll offer you more food.

It’s especially satisfying because you take part in the cooking process, but don’t have to clean up!

What else can I do in K-town after eating?

Where can I find some good KBBQ restaurants outside of Korea?

Let us know your thoughts or questions about KBBQ!