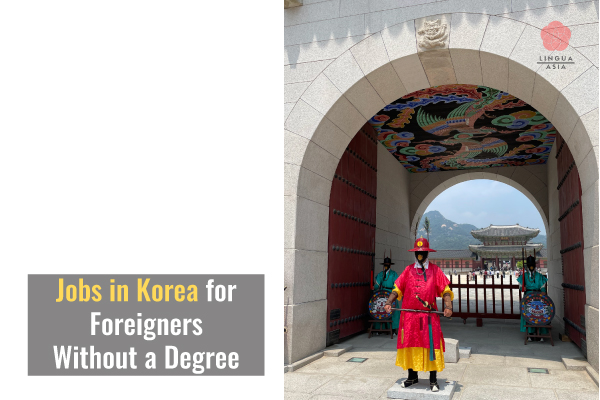 College isn’t for everyone.

But not in Korea. It has one of the highest university enrollment rates on the planet.

Don’t let that stop you though. Having a special set of skills will help you get jobs that locals can’t or won’t do.

Here are some jobs you can get as a foreigner in Korea without a degree.

Yes, you too can be professionally really really good looking without a degree.

You don’t actually have to be that good looking to be honest. Just have the right look and be willing to live in a house with a bunch of fun-loving models.

There’s always a demand for non-Korean actors. How do I know? I worked as an extra for a few years. Your roles will be limited to soldier, English teacher or criminal though.

But, you get to meet a ton of Korean celebrities and be the envy of some of your friends.

Similar to the previous one except you can maintain your anonymity.

I know a few people who make decent money off voice acting gigs. The jobs tend to be shorter than film productions and pay more per hour worked.

From cruise ships to theme park parades, Korea has jobs for foreign dancers.

I’ve known quite a few who make their living playing shopping malls, jazz clubs and anything else that comes along. Not a bad life. It helps to be really good though.

One of the best paying jobs out there that doesn’t require a degree. Just be willing to learn on your own and sit inside for hours on end.

Startup covers a lot of ground and there’s all type of work on it. Just make sure to get paid. The law changed recently guaranteeing a minimum wage of around 1,500 USD a month plus benefits.

The pay isn’t great, but you’ll learn a lot about the country and its people.

At the risk of being preachy, unless you’re a wiz at an in-demand skill or super hot, getting any 4-year degree (even an online one from the University of American Samoa) will help you a lot in Korea.

If you think people judge those without degrees in your country, wait till you find out how it is in Korea.

Hotels, cruises and amusements parks in Korea have moderate demand for hospitality personnel. You can make a decent living if you work your way up the ladder. Many international chains like Hilton hire expats.

Always be closing, worldwide! From real estate to wine, if you can get people to buy stuff, there’s work for you in Korea. It’s not considered a prestigious job in the country, but who cares?

This job is perfect for those who like to tie one on. Drinking may not be mandatory, but it’s strongly encouraged. Think a boozy episode of Mad Men.

Since blue collar work is stigmatized in Korea, there’s tons of opportunity for those who are good with their hands. It helps to be an expert in your field though.

English teachers are always in demand, so they need wranglers to go to unis and job fairs. But who will recruit the recruiters?

You need a 4-year degree to teach English in Korea at an educational institute. But no one said anything about cafes.

It’s a super gray area loophole allowing you to earn money while hanging out at a study cafe and speaking your language to anyone who enters.

Who needs degrees when you can ball?

If you’ve ever watched Korean baseball or basketball, you might have noticed some clearly non-local people on the teams.

The details are fuzzy, but the MOFA website says you can apply for humanitarian reasons such as looking after the elderly, young children and/or person requiring special assistance.

Wealthy families like to hire native English speakers to teach their kids the language.

Koreans make some serious boats. They need people to help out so there’s a special visa just for shipbuilders. You will most likely be living on the southern coast in Geoje or Ulsan.

The only ship I’m familiar with is friendship, but I’d imagine skills like welding are a big part of it.

You just need proof that you’re on assignment and you’ll get a D-5 visa.

Remember that Pakistani guy from Squid Game? You can do that too minus the super-secret underground illegal gameshow.

The Korean job market is a complex organism that’s hard to describe in a few paragraphs. I can divide it into two main parts: one for locals and one for expats.

It’s super tough for locals to get a job at a big company like Samsung, LG or SK. Successful applicants often must be the top of a top university (they actually check your GPA during the application process along with your picture). It is the Korean dream after all.

But, there’s far less interest in jobs at small to medium-sized businesses. They actually have trouble hiring enough people.

As an expat, finding a job can be super easy if you know the right people. Networking is even more key in Korea than it might be in your home country.

There’s always a demand for skills that aren’t covered by locals. Most positions have a high turnover rate, so they often need replacements. That means they’re always on the lookout for talented foreign workers.

In terms of your job prospects, there’s an overwhelming number of highly trained college graduates in Korea who can handle most fields.

Anything language-oriented will give you an advantage such as translation, global marketing, proofreading and copywriting in English.

There are more visa types in Korea than you can shake a stick at. Here are the most popular ones you can get without a 4-year degree.

You get to study Korean for as long as the course allows. A great way to try out the country and see if you want to live there long-term.

Gives you a year to travel in Korea and work any type of non-skilled job. The only downside is it has a yearly quota.

Let us know your thoughts or questions about moving to Korea without a degree!