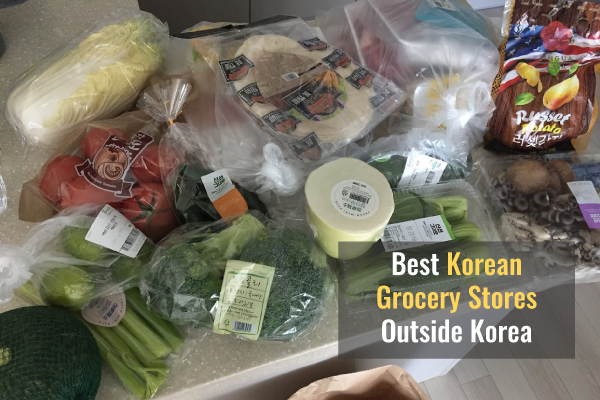 Korean grocery stores are everywhere these days, with some you can order from online. Easy-to-make, healthy meals are just a few ingredients away.

Here are the best Korean grocery stores you can find in the USA, UK, Canada and Australia.

H Mart is the Korean grocery store for everyone.

It began on the east coast and has grown to be the biggest Korean grocery chain in the US.

They carry the best variety, and there are tons of locations around the states.

It’s the place to go when you want to make only one stop. Unless you’re in Duluth, Georgia where there’s a great Mega Mart.

They also deliver everywhere in the continental United States. Find out more about their shipping and delivery policies here!

A store for the more experienced Korean grocery shoppers. HanNam Mart started in LA in 1988. It’s big on the west coast, but has a single branch in Fort Lee, New Jersey (there’s a huge Korean American community there).

HanNam Mart is geared towards Korean speakers. It’s one of the more authentic Korean shopping experiences in the states, for better or worse. It helps to be a little more assertive or you might find yourself not getting a parking spot or served.

If you can handle all that, there’s some great deals and tasty baked goods!

A farm that became an online grocery store. Based in California, it’s a great spot to find organic Korean goods straight from their own farm.

Fun fact, the SF doesn’t stand for San Francisco, but rather “Season Food”. They do things the old-fashioned way like sun drying instead of using dehydration machines.

Weee! is a great option if you want to buy more than just Korean food online. They have all the Asian and Hispanic products you could want.

First, download the Weee! app on Google Play or the App Store.

Once you input your zip code, Weee! will show all the products you can receive.

If you only need a few items, Weee! is a cheaper option than H Mart—and new users get $20 off their next order!

From fresh Kimchi made weekly to organic rice milled in New York, they have everything you need for healthy Korean meals. Kim C Market provides free shipping on orders over $79 dollars across the US.

Here’s a $10 dollar coupon when you purchase with this link!

The best-reviewed Korean grocery store I could find. They have a single branch in Duluth, Georgia. Mega Mart would be much higher on this list if they had more locations.

Luckily, they’re planning on opening a branch in Fremont, California.

Geared towards Korean shoppers, Hanyangmart, also known as H&Y, is a Korean grocery store that delivers to all 48 contiguous states via UPS.

They have three brick-and-mortar locations in NYC, but really excel at online shopping. Hanyangmart has weekly sales that save you a ton of money on Korean goods. If you want to have a more authentic Korean shopping experience from the 90s, check out their store.

One of the oldest Korean supermarkets in the US that functions like a Korean mall since in 1983. They’re so old school that they don’t have a functioning website. But, if you’re in Garden Grove or Fullerton, CA, you can get some great deals on Korean groceries.

Full disclosure, I’m not entirely sure if Arirang and A.R. are owned by the same company (again, they don’t seem to have a website), but they have a similar level of quality.

The one in Garden Grove has a Korean BBQ bar where you can choose from a variety of meats and marinades. Very cool.

Not a Korean grocery store per se, but a site where you can order from local grocers around the USA.

It’s a good place to order Korean items if you’re not a big box grocery store person or keen on leaving the house.

They have a huge selection of local Korean food stores and grocers that have the items you need!

It may sound like a Kosher supermarket chain, but it actually specializes in Korean groceries.

Limited to California, Texas and Georgia, Zion Market is one of the cleanest and well-stocked Korean grocery stores in America.

As of now, they have five branches throughout the contiguous states.

Insider Tip: Koreans who move to the states are happy to see more Korean items at Trader Joe’s like vegan bulgogi and tteokbokki. So, if you don’t feel like going to any of these stores, Trader Joe’s has some items you might like.

They’re the largest Korean & Asian supermarket chain in UK. It translates loosely to “Please Come, Soho” in Korean. It sounds much more charming in the original language.

In addition to groceries, they carry toys, stationery, houseware and electronics from Korea. You can expect high quality shop environments and excellent customer service whenever you visit.

They have branches all over England, so look out for one near you.

Known as Canada’s first Korean grocery store. PAT Central has four branches in and around Toronto with a great selection of Korean products, fresh fish, meat and veggies.

The tidiest Korean grocery store in Auckland and some say all of New Zealand. It’s a good choice for general goods as well including fresh meat and vegetables.

99 Ranch works in a pinch for Korean food items as long as you don’t need anything too specific. They carry most snack, ramyun and alcohol brands from the motherland.

99 Ranch delivers with free shipping on orders over $50.

With just a few ingredients, you can make most Korean dishes!