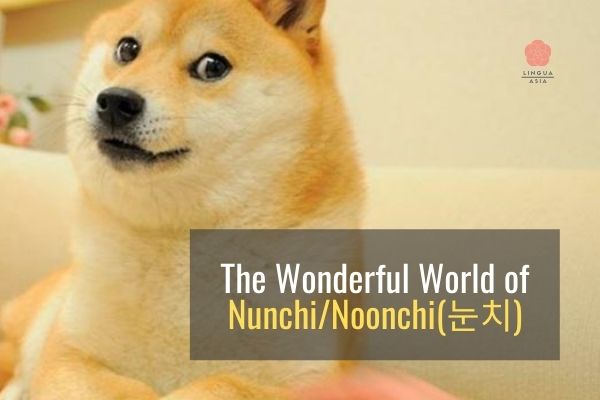 This post covers the deeper meaning of noonchi (nunchi) in English.

I’ve had a fascination with noonchi for a few decades and learned from the best.

Noonchi is one of my favorite parts of Korean culture. It requires you to be present and mindful. Noonchi is a great skill to have when others lack focus. It’s like a hidden world that only a few can see.

Knowing these will be bring you one step closer to understanding Korean culture!

Both mean the same thing, but “nunchi” is the correct spelling according to romanization rules, while “noonchi” is more accurate according to how the word sounds.

For the purpose of this article, we’ll use noonchi.

What does noonchi mean?

Noonchi (눈치) is a broad concept that literally means “eye-measure”. It includes:

Most commonly, it’s a way to gauge people’s thoughts and feelings based on their behavior, tone, body language and situation.

Noonchi can also mean an attitude and mannerism that reveals someone’s thoughts.

Many things in Korean life aren’t said and are implied instead.
It’s important to learn how to read between the lines.

Anyone can use noonchi, all they have to do is listen and observe.

Korea has a high-context culture (고맥락 문화), meaning many things are communicated non-verbally.

Koreans have shared experiences such as men serving in the military and women having to cook during holidays. They can read into things that are easy to miss for others.

The earliest mention of Noonchi first appears in the 17th century, but it’s likely a much older concept.

Like many things in Korea, noonchi is all about speed. Koreans say you have “fast” noonchi (눈치가 빠르다), not “good” noonchi (눈치가 좋다).

Noonchi is half of all social life

Korean business culture is based on interpersonal relationships, which can be fostered with the help of noonchi.

Most people feel that you either have noonchi or you don’t.

I believe that everyone has some level of noonchi whether they know it or not. It’s a life skill that you can actually develop and use in any country. Like being able to see better in the dark, all it takes is some practice.

Examples of Noonchi in everyday life

How Noonchi can improve your life

This skill transcends culture and can help improve your people skills.

Noonchi can be used anywhere, even in English-speaking countries like the US, UK, Canada and Australia.

It can even the playing field when you’re dealing with a power imbalance.

It can build confidence, especially for introverts.

Noonchi can improve harmony in your life with others.

It will make you more present and mindful.

It can give you an advantage at work, in business and during negotiations.

Moderation is always a good rule to follow in life. Noonchi is no different and relying on it too much might take a toll on your communication skills.

Overusing noonchi might lead you to start verbalizing less.

It can make you self-conscious or fixate on what others are doing, instead of focusing on what you need.

You’ll expect others to be able to do the same thing. It’s important to remember that not everyone uses this superpower.

Noonchi can lead you astray sometimes, since it requires intuition. It’s best to treat it as a hypothesis you can test with a question.

In large congested cities like Seoul, it’s good to be able to turn it off or you might drain your battery.

Noonchi can cause others to make assumptions about you. Try to specify when someone has misjudged the situation.

How to develop Noonchi

For people you’re talking to:

When to practice Noonchi

You can practice this skill when:

My experience with Noonchi

I got my first taste of noonchi in K-town, Los Angeles when I was 18 years old. My friends taught me the “noonchi” drinking game where you say the next number in sequence. I was pretty good at this since it didn’t involve intense math or “rock, scissor, paper”.

After moving to South Korea, it realized how important the concept was in everyday life. Something simple like noticing who’s about to leave their seat on a crowded bus or subway then standing in front of them so you can sit down makes your hour-long commute easier. Also, being able to spot cult members trying to recruit you or crazy people can save a lot of trouble.

Reading the room during meetings to match the tone can make you look like a team player as well.

Knowing when some has had too much to drink or is in a bad mood can also give you time to remove yourself from the situation.

Over time, I was able to improve my noonchi with just a little bit of interest and effort.

Noonchi has enriched my life, but I always use it with caution. It can be inaccurate at times and take too much energy.

What are the characteristics of people with really fast Noonchi?

Let us know your thoughts on noonchi in the comments!