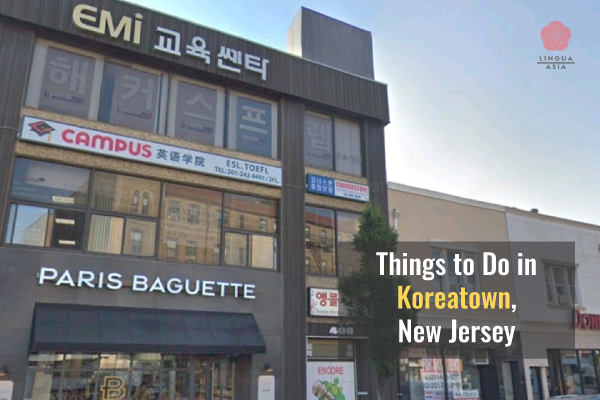 New Jersey’s best kept secret is that they have a better Koreatown than the one across the Hudson in NYC.

Palisades Park, or “Pal Park” as the cool kids call it, has some neat things. Here’s what you need to know about it.

Read on for all the best ways to enjoy in Koreatown in New Jersey.

The Korean Produce Association organizes a festival in early October from 10am to 10pm.

Expect food, cultural events, and concert performances by elite Korean pop idols for anyone interested in experiencing the culture.

Try out more than 100+ trendy lifestyle brands from South Korea in late September to early October. The event is organized by KOTRA New York and includes Korean beauty (skincare, makeup), fashion, food, and baby brands at the American Dream Mall.

Dubbed KAANJ for short, it’s a non-profit organization that promotes Korean culture and encourages deeper interactions between the Korean-American community and the greater public.

They’re pushing for a public holiday for Kimchi, so you know they mean business.

It was founded in the year 2000 to help Korean students and further the development of the academic community.

There aren’t any big pavilions or hanok in Palisades Park, but they do have a few Korean monuments.

A bronze plaque dedicated to the memory of comfort women was put up in front of Palisades Park Library, the first of its kind in the USA.

There’s also a memorial dedicated to the victims of the Sewol Ferry disaster at the library.

Palisades Interstate Park runs along the Hudson River and is a great place to go for a stroll.

Highwood Hills Park is the lesser-known location for an easily-accessible dose of nature. It’s a great place to bird watch and spot deer.

Grand Billiard is the place for hours of fun without spending too much cash. It has tons of tables and a good mix of ajeossi and non-Koreans.

Drinking is considered an activity in Korea, so I added it to the list. Duri Pocha is a casual and affordable place to get your soju on with some great anju.

Swinging swords is never out of style.

HMK Kumdo Academy is where you can learn the Korean art of slicing things up in Palisades Park.

King Spa is the largest and most famous jjimjilbang in the area. With 3 floors of relaxation and some questionable choices in decoration, this is the closest you’ll get to an authentic Korean spa experience in New Jersey.

SoJo Spa Club is a bit south of Palisades Park, but it offers a less authentic but more upscale spa experience.

When the question is if you want to eat, drink, or sing noraebang and the answer is yes, Karaoke Rock 21 has you covered. It’s the best of both Korea and America.

Get your hair done

If you ever wanted one of those fancy perms you see on K-dramas, check out Kim Sun Young Hair Salon.

Broad Ave is a good place to start. If you’re willing to go off the beaten path, check out Yea Jip BBQ 옛집 for one of the better KBBQ places in the area. The quality of meat is higher than you’d get at an AYCE joint.

Insider Tip: Koreans don’t really believe in food allergies, so be sure to mention anything that you can’t eat to your server.

Wild sesame is tricky to find in Korea, let alone in another country. This restaurant run by two grandmas serves up a variety of Korea noodle dishes, with the star being dulggae kalguksu, the closest you’ll get to a cream sauce in Korean cuisine.

It’s savory and rich while being healthy.

Not red Korean ginseng! ChengKwanJang is the largest chain for Korean red ginseng. It has health benefits including natural energy without the crash after.

HanNam Mart is the big box Korean grocery store in Palisades Park. It’s less crowded than H-mart and is more popular among locals.

An all-natural diet shake that works great as a meal replacement. It’s simply ground up grains and beans that are super healthy and filling. Look for a mill for the fresh stuff, or check out a Korean grocery store.

Bapdoduk (rice thief) has a nice selection of side dishes that go great with rice. They’re the best way to lose weight while enjoying your meals.

While you’ll find more places to stay in cities like Boise, Idaho, you won’t have too many options in North Bergen County, because it’s mainly a suburb.

Hyatt Place is your best bet for a pleasant stay. Located on the outskirts of Koreatown, it’s one of the nicer hotels in the area.

Where is Koreatown in New Jersey?

It actually spills over the imaginary border into adjacent streets. You can find Korean businesses all over Bergen County and beyond.

When and why did Koreans end up there?

Koreans and other Asian ethnic groups started coming to Bergen County in the 1980s. They came mainly because it was cheaper and safer than New York, which was like the Purge back then.

It helped that there was ample public transport into the city, so they could commute easily. Once they got a foothold, Koreans just started flocking to the area because it was already established.

Do I need to tip here?

While tipping isn’t a thing in South Korea, you should follow local tipping customs at Koreatown in New Jersey.

Where can I park here?

There’s metered parking on Broad Avenue and free parking on some side streets.

Let us know your thoughts about Koreatown in New Jersey!