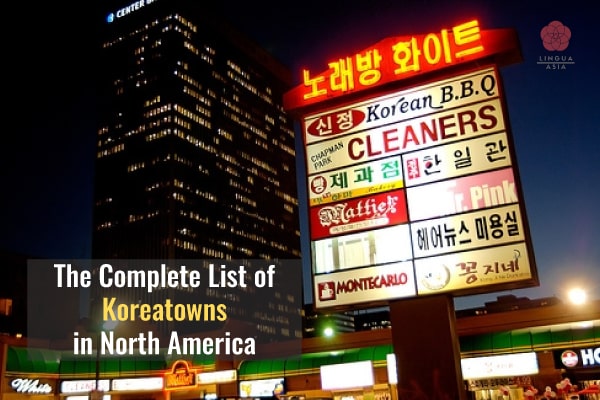 Want to experience Korea in your own backyard? Just keep driving until you see hangul in signage. If you live in Los Angeles, New York or Dallas, you’ll do just fine.

Here are the biggest and bestest Koreatowns in North America along with some you’ve never heard of.

Koreatowns (코리아타운/한인타운) in North America are great. Not only can you find amazing Korean cuisine, shopping and activities, you also get some Japanese, Taiwanese and Vietnamese restaurants sprinkled in for good measure.

Some Koreatowns are recognized as “official” by the city they’re in, while some aren’t. But what counts as a Koreatown you may be wondering? It’s simple. There must be the traditional Korean American layout of H-Mart, noraebang, KBBQ restaurant and optometrist for it to make this list!

Fun things to do in Koreatown

The biggest and some would argue the best Koreatown in the USA, nay the world!

3 square miles of the highest concentration of nightclubs, shopping malls, 24-hour businesses and restaurants in the country.

Head west of Downtown LA and south of Hollywood and you can’t miss it. You’ll be greeted by neon signs with those glorious circles and squares, multi-level shopping malls flanked by small shops and restaurants in a mix of architectural styles. It’s heaps of fun for all ages.

It’s so Korean that some have lived there for decades and don’t speak a word of English!

Unlike its LA counterpart, this Koreatown is easy to miss if you don’t know where to look. It’s a surprisingly small enclave of Korean restaurants and shops that covers just a few Midtown blocks.

What it lacks in size, it more than makes up in energy.

The area is a great place to people-watch and soak in the culture. Just like any big city in the motherland, it has it all; bars, beauty/nail salons, and everything else nestled in its multi-floor buildings. You can find tons of restaurants serving authentic and fusion Korean food at a reasonable price for the area.

There are restaurants and shops outside the highlighted area on the map below, so keep looking if you can’t find what you want.

It’s one square mile of the highest density of Koreans in the western hemisphere (6.3% of Bergen County residents are Korean, the highest per capita in the United States.).

Centered around the business district on Broad Avenue, which has been nicknamed the “Korean food walk of fame”, you’ll be spoilt for choice when it comes to restaurants serving up small dishes of banchan.

After you’re done feasting, you can relax at a 40,000-square-foot 24-hour spa with 11 saunas, hot- and cold-water baths and a food court.

The first Koreatown in North America

Did you know that the first Koreatown was established in Riverside, CA in 1905? It didn’t have a PC bang, but it did have a labor bureau and a cooperative association. These helped Korean Americans network and gain better working conditions in their new home country.

There are two concentrations of Korean businesses in and around Dallas. The first being a collection of restaurants and shops along Royal and I35, around where they intersect.

Or you can head north of Dallas to Carrollton, for another newer one that’s home to a Super H Mart on George Bush and old Denton. They have everything you’re looking for including Korean coffee chains like Tom and Toms and Tous Les Jours in a more upscale environment.

Washington State isn’t the first thing that comes to mind when you imagine Koreatowns in the US. But, there’s a huge population of Koreans in the state that stretches from Lynwood down through Seattle and Tacoma to Lakewood. There’s bound to be a K-town or two there (there’s actually three big ones). These Koreatowns are nice, because they’re mainly for locals and not so touristy.

Word is on the street that the best KBBQ places aren’t found in Seattle, but in the surrounding suburbs. North of Seattle in Lynnwood surrounding the Lynnwood Recreation Center and North Lynnwood Park, there’s a Koreatown so large it has its own H-mart plaza. There’s not much info online, but it’s worth a look for some hidden gems.

If you can’t find what you need there, sashay south of Seattle along Federal Way for even more Korean restaurants and businesses. They go deep too with the ever-elusive Korean-Chinese restaurant featuring Jjajangmyeon, a unique black bean noodle paste dish developed in Incheon. You won’t run out of amazing Korean food in Federal Way along the 99 between 330th and 336st.

Lakewood has a little-known but huge Koreatown with an interesting history that stretches 4 miles. Located near Joint Base Lewis-McChord, a US military installation, it became a place for recently immigrated Korean wives and their families after the Korean war.

They formed a Korean Woman’s Association and built the largest Koreatown in the Pacific Northwest over the years.

Korean restaurants are located throughout Philadelphia. In the Olney section of the city, you’ll find the first Koreatown in the area. Since the 80s, it has spread to Cheltenham in the north, Upper Darby to the west and along Marlton Pike to Cherry Hill in the east. Just look for Korean signs and you’ll know you’re in the right place.

Buford highway just outside of Atlanta in Chamblee is where it’s at for all things Korean.

Go a little further northeast on the 23 and you’ll find another assembly near Duluth.

Gwinnett County along Buford Highway near Atlanta is considered the city’s Koreatown. They’ve got it all, including a most Super H Mart.

Not so much for locals. It’s a newer one that has sprung up in response to the thousands of Korean tourists who flock to Hawaii every year. Keeaumoku or Korea-moku (heh heh delicious) as it’s affectionately known, is growing so much there’s talk of making it an official Koreatown.

What started as a Koreatown along Lawrence Avenue (4800 North) in the 80s that was officially nicknamed “Seoul Drive”, has now become a multicultural area with cuisine from around the world.

Nearly half of the businesses are still Korean-owned between Kedzie Avenue (3200 West) and Pulaski Road (4000 West), so you can still find plenty of stuff from the Land of the Morning Calm.

While not technically in DC, Annandale, Virginia is the capital’s unofficial K-town. Most Korean businesses are found either on Little River Turnpike, or a few blocks off it near the intersection with Annandale Road and Columbia Pike. There’s tons of variety and a few fried chicken places that you must try.

This one grew fast after the 1992 LA riots when store owners fled north to Oakland for a safer environment, seriously. They did so well they formed their own organization that collects extra property taxes from businesses in the CBD to keep it thriving.

They’re now recognized as Oakland’s official Koreatown, and some might consider it San Francisco’s as well since they don’t have their own (Filmore and Geary have some Korean markets and restaurants though).

Dubbed the KONO district, short for Koreatown Northgate, it stretches along Telegraph Avenue from 20th to 35th streets in Oakland.

Not the largest Koreatown on this list, but you can find tons to eat, drink and buy on and around Bethel and Henderson Road. Korean grocery stores, shops and restaurants abound in this part of town.

Head on down to Springbranch around Long Point Road for some grilling, eating and catching up, Korean style! It’s a smaller, tight-knit community that makes it easy to get to know everyone.

Since real estate prices on Manhattan are out of control, it’s no surprise that Koreans branched out eastward to Long Island. And long indeed is this K-town (sorry about that).

It stretches from Queens along Northern and Queens boulevard to the Gold Coast of Nassau County. And it’s still growing! A wonderful strip of territory to find some Korean food and shopping action.

You can find this gem in Allston Village on parts of Cambridge Street and Brighton, Harvard and Commonwealth Avenues. This trendy neighborhood has a lot of fusion and modern takes on Korean food to satisfy the sophisticated crowd around Boston University.

It has a lot to offer in addition to delicious Korean food that’s sure to keep the most cultured among us busy for a few years.

Not an official Koreatown as of yet, lower Charles Village covers a lot of ground. Just check out anywhere between 24th Street, North Avenue, Maryland Avenue and St. Paul Street.

If you don’t find what you’re looking for there, head west down the five-mile stretch along Route 40 in Ellicott City for 170 Korean businesses. It was deemed an official Koreatown by the governor in 2021!

You can find a compact zone with a large number of Korean businesses along Havana Street from Mississippi Avenue to Iliff Avenue in Aurora. It’s a great place to experience a slice of the motherland in a region that isn’t known for having Koreans.

Toronto has the largest population of Koreans in Canada, so you know you’ll get your KBBQ and noraebang fix there. There’s a nice little grouping in Seaton Village along Bloor Street between Christie and Bathurst Streets.

You can have your pick of restaurants, bakeries, gift shops, grocery stores and travel agencies (yes they still have those!). When it gets overwhelming, take a breather from the vibrant environment at the beautiful Christie Pits Park.

If you want the “new” Koreatown, head up to Willowdale Yonge Street between Finch and Sheppard Avenue.

From Downtown Vancouver to Coquitlam, there are tons of Korean businesses that serve Korean-Canadians living and working in the Tri-Cities.

West End along Robson Street has some newer and trendier restaurants that are worth a look.

If you’re not in the mood for the big city, explore Lougheed Town Centre in Burnaby for all your Korean food, dessert and shopping needs.

The Koreatown in Coquitlam started with an H-mart (they usually do), and ended up growing into a massive business district.

What are some cool things I can do in Koreatown?

Let us know your thoughts or questions about Koreatowns in the United States and Canada!