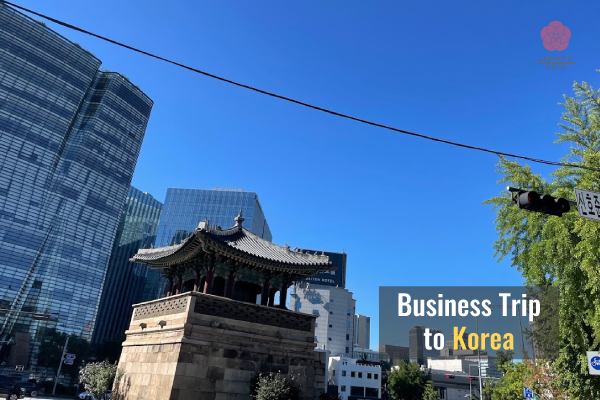 So you’re going on a business trip to South Korea.

I’m going to cover the basics of business travel to Korea including:

Korea is a great place to mix business with pleasure.

As you may have guessed, Korean business etiquette can throw some curve balls at you.

There’s a ritual to everything from exchanging business cards to who pays for dinner.

Fortunately, most of it is based on age/seniority/title.

The executive summary is:

Job titles are different in Korea as well.

You’ll meet a minimum of two people, a junior and senior member of the company. Or you’ll meet the entire team depending on how important you are.

Try to get their names and job titles with photos beforehand to ensure you are addressing everyone properly.

Check online (Linkedin or company website) for job titles in Korean to see where you fit in the pecking order. Also, simply add “nim” at the end of their job title or name to make a great impression.

The junior is there for support, while the senior may have some decision-making power.

It’s also possible that neither of them can make the deal right then and there, so just use the time to get to know them and bond.

Also, if you’re going to sell something, your position will be below both of them. Make sure to defer to them in most situations.

If they’re selling you something, just relax and try to get a good deal.

To go to Busan, you’ll be landing in Gimhae International Airport.

When landing in Incheon, you’ll notice two things. Your eyes will begin tingling and people will start getting up immediately to grab their bags from overhead bins.

Don’t worry, the air is generally better in Seoul and you don’t have to be in a hurry.

Incheon airport is the largest in South Korea and is one of the best in the world. It has won numerous awards for cleanliness, transit-time, efficiency and services.

On a side note, I used to take a bus from Seoul to Incheon Airport 2 hours before an international flight and make it to the gate with time to spare. I don’t recommend this as I was young and liked to live on the edge.

I’ve made it from ramp to exit in 25 minutes when arriving. I also don’t remember ever having to use a bus to board or exit a plane. There’s always been a sky bridge/jetway connected to the terminal.

Incheon Airport also has a golf course, spa, medical center, digital gym and ice rink, because of course it does.

Public transport is the best way to get to and from there.

Buses and subways run all over the city. There’s even a new express airport subway line that runs all the way to Central Seoul Station in an hour.

I’m all for taking a taxi to and from the airport when it makes sense, but not in Korea. The bus or subway will get you there faster because of the bus lanes and they’re safe, clean and a fraction of the price (taxi to/from Incheon Airport will run you 100 dollars).

You can fly direct to Seoul from Los Angeles or San Francisco in ten hours.

Gimpo is the older and smaller airport with the added advantage of being able to get into the city a bit quicker.

Gimhae Airport feels very similar to the one in Gimpo. If you flew in a circle and took me back to either one, I wouldn’t know the difference until I left the airport. There’s a nice light rail that will take you to either Busan or Gimhae.

A domestic airline like United will get you there with fewer frills but larger seats.

Regardless of your position, you’re going to get a gift. You’ll want to bring some too.

Even something small like a company pen or mousepad can work. Hopefully, you were able to find out everyone’s info and get the right gifts.

The Korean government and some companies don’t allow gifts over 50,000 won (40 usd) because of business favors or bribery in the past.

Speak with a company representative such as a secretary first to see what’s allowed.

Some companies have a spending limit on gifts where anything over a certain amount has to be reported, but can be kept.

If you’ve already met them, you can buy a nice gift like Godiva Chocolate or See’s Candies.

Spring, Summer, Fall, Winter, Korea is a different country during each season.

The best way I’d describe it is a more extreme version of NYC with some fine dust sprinkled it.

To further complicate matters, most Korean companies have strict dress codes. Anything below a suit and tie for men or blouse and skirt or pantsuit for women are be considered “bumming it”.

The only exception would be startups, but they tend to skew a bit more formal as well.

Spring is a great time to visit. The weather is at its best and flowers are in bloom. Wear a mask if you’re sensitive to pollen or fine dust, because they can get bad during that season. Claritin will be your friend here.

Summer is hot and getting hotter. It’s also humid, so some short sleeve dress shirts will come in handy.

Fall is my favorite time of year because the air is crisp, cool and clean. A light jacket for night time will be perfect.

Winter is Siberian-level cold. Bring everything warm you can muster. A winter coat and thermal underwear (heat-tec by Uniqlo works well) will be your allies.

Traffic in Seoul is more congested than in New York or LA. You’ll want to be near your meetings.

For anything under a few weeks, you can simply stay at a hotel nearby your venue. Some motels have smoking floors, so be sure to check if you’re sensitive.

Korean hotels are pretty much what you’d expect with a few minor differences.

Breakfast options aren’t great (Koreans eat mostly the same stuff every meal). Ham and cheeses are expensive, so you’ll be snacking on mainly local fare with some Korean-Chinese thrown in.

Hotels are packed in Seoul, so don’t expect a quiet time. They have random promotions/collaborations where you get some trendy donuts or other free gifts.

Ask for late checkout and other things in English. You can be polite but firm for good results.

If you go to smaller cities, English ability will be limited. If someone at the front desk is avoiding you/being awkward, that usually means they’re afraid to speak your language.

Serviced apartments are good for stays longer than a few weeks. They come with one, two or three bedrooms and are a great choice when traveling with family.

Serviced apartments make a perfect base because they often come with a kitchen and dining area for a taste of home.

Seoul is a massive city with companies all over. The three main business districts in Seoul are Gwanghwamun, Gangnam and Yeouido.

Google Maps doesn’t fully work in Korea, so it can be hard to gauge distances. Only Naver Map works for security reasons (they’re technically at war still). You’ll have an extra tough time if your accommodations are in Yeouido when your meeting is in Jamsil.

They use the 220v outlets in Korea, so you may want to bring one adapter if you’re coming from the states or other English-speaking countries. Most business hotels will provide one in room though.

If you’re coming from Europe or Thailand, you’ll be fine.

No need for tips anywhere except perhaps hotels, but even that’s uncommon.

It’s hard for me to transition back to the states, because any amount of tipping starts to feel generous.

My friends chided me on a visit because I tipped 10% at a ramen restaurant where we sat at the bar. I could literally reach over the counter and grab a bowl, so I didn’t think it was necessary to tip at all.

There’s no visa required for citizens from the USA, Canada, UK, Australia and New Zealand.

You’ll simply get a 90-day visa exemption. You still need to apply for K-ETA before your trip though.

Anything longer than 90 days will require either a visa run to another country or one of the many confusing D visas.

If you’re not getting picked up at Incheon Airport, consider the buses or subway. They’re fast and cheap.

There’s no Uber in Korea but the locals use Kakao Taxi.

Public transport is fast, clean and safe in Seoul and Busan as well as most of the country. Buses drive like they’re always late, so be sure to flag them down and jump on when the doors open.

Buses accept cash too, but it’s much better to get a T-money card, which works for everything including taxis, subways and buses in every city.

There’s no need to worry about going hungry in Korea.

There are tons of places for business travelers in Seoul to sample the local cuisine.

If you’re a fan of in-your-face flavor, you’re in luck. Korean cuisine is packed with spices.

Here are some notable culinary experiences you should try:

Let us know your thoughts or questions about taking a business trip to South Korea!