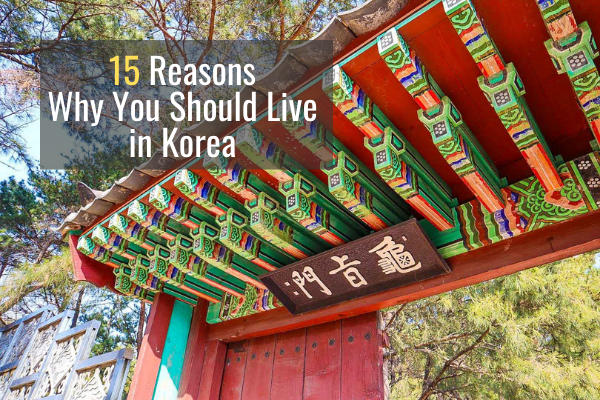 Packing up all your stuff and moving to another country is a big decision, one that’s tough to make without knowing all the pros and cons.

This guide will explain the benefits and disadvantages of living in South Korea.

I lived in South Korea for ten years and even started a business there. Here’s what I’ve learned from the experience.

South Korea can be a great place to move to. It’s a work hard/play hard kind of country that’s not for everyone. The pros outweigh the cons in my experience, but perspective is necessary to appreciate them.

Read on to find out why you should or shouldn’t live in South Korea.

Korean housing is well-made, high-tech and comfy. There’s no shortage of modern apartments with cool features like video intercom that shows visitors at the entrance and password entry (since early 2000s).

Most are bug-proof with double pane windows.

Winters get chilly so you’ll love the insulation and heated floors (온돌).

You can also get acquainted with bidets, which are a game-changer.

Like anywhere, make sure to screen potential homes before moving in.

Bonus Tips: Make sure to avoid 옥탑방 (rooftop rooms) or 반지하 (garden floor rooms as shown in the Parasite movie) even though they are super cheap.

Korean history stretches back 5,000 years and is well-documented. You’ll find 500-year-old Buddhist temples in your neighborhood and bronze age relics in random parks.

Nightlife in Korea is some of the most frenetic and dynamic in the world. There’s something for everyone.

I spent most of my 20s enjoying my weekends to the fullest. In a city like Seoul, you’ll have plenty of options with over ten neighborhoods to choose from.

Don’t worry about living in “smaller towns” of one million people, they still have a lot to offer with different vibes.

Weekend trips are great in South Korea, because there’s so much to see a few hours away. There’s great hiking, camping and even surfing to enjoy.

When you need a break from Korea, it’s a quick and cheap flight to countries like Japan, Taiwan, Thailand and Indonesia.

Korea has 9 cities with over a million people and many are recently built.

Korea has modern and well-maintained infrastructure that makes getting around without a car a breeze.

Public transportation is among the best in the world with subway, train, bus and taxi services linked with one T-Money card that works all over the country.

Internet speeds are among the fastest in the world, so you can stay connected with loved ones back home.

Public bathrooms are often clean and easy to find.

Public health wasn’t at the forefront of people’s minds until the COVID-19 pandemic. South Korea showed their strength by managing the virus, even after getting hit the hardest at first.

They used contract tracing, widespread mask usage, quarantine of arrivals and restrictions on gatherings to stay mostly open with a low death rate.

Health care is affordable and easy to access. Health insurance will cost around 4% of your salary instead of 20% in the U.S.

Koreans sometimes complain that the 3,000 KRW ($3) it costs to visit the doctor is too high. I just stare blankly in response and say nothing. Even without insurance it was under 10 dollars for an appointment.

Going to the doctor doesn’t take all day. There are multiple clinics in each neighborhood, so there’s plenty to go around. You also can go directly to a specialist and skip the step of seeing a general practitioner first.

In fact, Koreans tend to go for things like colds, because it’s so fast and convenient. They even get IVs when they’re feeling under the weather, since they don’t cost as much as an economy car.

South Korea has a low crime rate given the size and density of its cities. You’ve probably heard that you can leave all your belongings in public and find them untouched an hour later. That is unless someone hasn’t turned them in to lost and found.

Food is the center of Korean culture. There’s an old saying that goes, “everything begins with a meal”. Korean cuisine is more than just Kimchi and Doenjang. It includes dishes based on soy sauce, dashi, toasted sesame seed oil and seaweed to name a few.

Even after 10 years, I’m still discovering new dishes that taste completely different from what I’m used to.

Korean restaurants are great because service is fast and there’s no tipping. They also have unique ways of getting your server’s attention with “call bells” you press or by simply yelling “yogiyo!”.

Café culture is newish but surprisingly big in Korea. While I enjoy cafes in Europe, they tend to be cramped and smoky. Korean cafes are diverse, modern, comfy and creative.

Coffee quality has also stepped up, so you can find places with top-notch flavors. Two of my favorite coffee shops in the world are actually in Korea.

The number of non-Korean ingredients and restaurants is increasing as more Koreans go overseas and the foreign population rises.

Koreans work hard and play hard. They can be a little standoffish at first, especially in Seoul, but there’s genuine warmth once they get to know you.

There’s more distance among strangers and less among people in your social circle. When I quit my first job, one of my students let me stay with him for free for almost a year.

In smaller cities like Gwangju, ajummas would walk up to me and give me oranges. I’ve been fortunate enough to meet families, attend weddings and go on trips all over the country with locals.

Korea is one of the few countries left where you can arrive with just a college degree and work your way to financial independence. I was able to go with little work experience and network my way into jobs that I never would have found elsewhere.

More about Getting a Job in Korea as an Expat

Koreans have one of the highest average incomes in the world and a strong consumer culture. There are many jobs and even businesses you can start.

Korea has some of the most convenient services in the world. You can get same day grocery delivery and call taxis quickly.

Korean apps and websites are innovative and allow you to do many things like shopping and banking on your phone.

There are tons of parks, green spaces and mountains you can decompress in.

This is a big disadvantage for me that has gradually worsened over the years. Friends of mine living in Beijing remarked that the air was so clean when they visited, so it might not be a problem for you.

The good news is that if you get a modern apartment and invest 100 USD in an air purifier, you’ll avoid a lot of it. You can always try living outside major cities for better air quality.

This is especially a problem if you choose to live in Seoul. Balancing the crazy pace with quiet places to recover is a must. It’s important to learn how to say “no” or life can overwhelm you.

This is becoming true around the world, but I first started noticing it in 2008. Winters are getting colder and summers hotter with more fluctuation day-to-day. Make sure to pack plenty of warm clothes. Or consider moving down south for a milder climate.

You’ll be insulated from most of this as a foreigner, but it’s there. When I first arrived in 2006, Yeouido looked like a western country in the 70s. I would see groups of coworkers consisting of three to four men and one woman during lunchtime.

Things continue to improve with women’s rights increasing, and the first female president in 2013 (yeah she was impeached and went to jail, but that had nothing to do with her gender).

You get some cool experiences out of it too. I’ve been lucky enough to teach English to the first female fund manager in the country. It was interesting to hear about her perspective and experiences.

There are strengths and weaknesses to this, but as a foreigner you’ll notice some of the drawbacks.

There’s more staring than what you’re used to back home, which is mainly out of curiosity (you’ll look exotic to locals).

You won’t be considered a local, even if you lived there for 30 years. It’s important to focus on the opportunities this brings, since the demand for your skill set far exceeds the supply.

Living in Korea comes with its own set of challenges and opportunities.

Let us know your favorite and least favorite part of living there below.