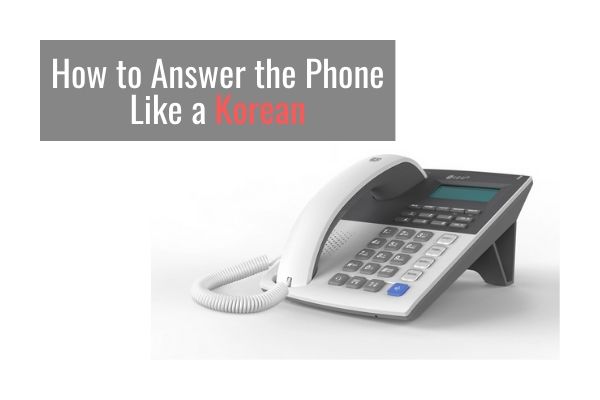 Not sure how to answer the phone in Korean?

Answering the phone in Korean can be intimidating.

There are a few rules about phone etiquette that you should know.

Like with most business-related things in Korea, answering the phone requires a certain amount of protocol.

Not answering the phone correctly will make you look unprofessional, and you might have to hear your boss complain.

Phone plans in Korea can be expensive, and people focus more on data than minutes.

During casual phone calls, 어 (uh) 네 (neh), which mean yes in Korean, might be the only thing one says while listening to someone talk.

But, Koreans prefer to call when they need something done. It makes their request less likely to be ignored.

Answering the phone at your company is very different from answering a personal phone call.

Here is a step-by-step guide to answering the phone at work in Korea.

While working at Korean companies, I was always told to pick up the phone before it rings 3 times.

If you answer the phone after that, start the conversation by saying “기다리게 해서 죄송합니다”.

When answering the office phone in Korea, it’s a good idea to start by thanking the caller.

(Saying “여보세요” will sound very unprofessional at the office.)

It’s important to state your company name followed by your name then -입니다(-ibnida).

“Company Name, (Your Team), Your Name입니다.”

If the person is trying to reach you, tell them to go ahead and speak.

If the person is trying to reach someone else, say that you are transferring them before doing so.

If the person the caller is trying to reach is not available, say that he/she is absent at the moment and ask if they want to leave a message.

When you are done, hang up the phone by saying thank you again.

If you answer the phone at work, it’s best not to hang up first.

If the other person on the phone is older or higher than you, it’s definitely better not to hang up first.

By following these simple rules, you can sound like a pro when answering the phone in Korean.

I spent the first week at my first job out of University learning phone etiquette among other things.

It was a bit stressful because my boss would listen in on my calls and critique me immediately after. This made me prefer writing emails.

Don’t worry if you make a mistake. Even some Koreans can’t follow this protocol.

Let us know if you have more questions in the comments.