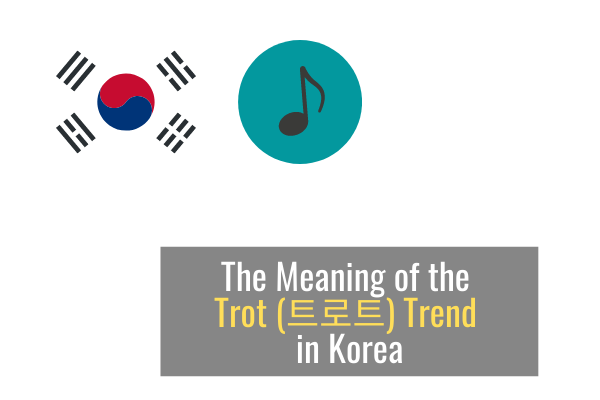 This post covers the Korean trot trend and what it means.

I go over the history and why it’s popular again all of a sudden.

Trot is a music genre of Korean pop.

Even though I’m not a huge fan of it, it’s perfect for company gatherings or hweshik (회식) at noraebang (노래방) because older generations which usually include your boss, love it.

Until a few years ago, trot was considered ‘old fashion’. Young people would sing it ironically at noraebangs.

Trot is a genre of Korean music mostly popular with older generations.

Its name is a shortened variation of “foxtrot”, which influenced trot with its two-beat elements.

Trot has been influenced by different genres of Korean, Japanese, U.S. and European music.

It’s very distinct and one of those things where you know it when you hear it.

You can hear trot at rest stop (휴게소) kiosks (conveniently located by the toilets to sell their mixtapes) whenever you drive or take a bus around Korea. Trot is the unofficial soundtrack of road trips because the beat will get stuck in your head.

Trot was created during the Japanese colonial period.

It had a lot in common with Enka from Japan, but has continued to evolve on its own.

With the rise of K-pop music in the 1990s, trot started to fall out of fashion.

To keep up, trot stopped being tragic, and rather turned into exciting music perfect for entertainment venues.

Even though trot has been around for over 100 years, no one knows how long the current trend will last.

Since the beginning of 2020, people have been avoiding social life due to the pandemic all over the world.

Koreans developed a coping mechanism for stress and depression from social distancing by having trot competitions on major TV channels. (Some young trot singers from the shows became famous)

Trot is perfect for the current situation since it’s rhythmical and talks about sad reality in a fun/exciting way.

The climax of this trend was during the last Chuseok (추석) 2020.

73-year-old Na Hoon-a performed a live show on KBS for 2 and a half hours. He also released a new song, called “Tes Hyung”, which refers to Socrates in a friendly way to reflect on our lives using philosophy.

What are some popular trot songs?

What kind of instruments are used in Korean trot music?

Percussion instruments and accordion are featured prominently in trot songs, but anything goes.

How would you describe the sound of Korean trot music?

It has an upbeat tempo, repetitive two-beat rhythm and vocal inflections.

What is Korean trot music good for?

It’s great for singing at a noraebang and road trips since trot is lively and is easy to follow. Singing trot at a hweshik (회식) is a great career move, because middle-aged managers grew up listening to it.

Where can I listen to Korean trot music?

Korean music apps are a good place to start. You can also check out YouTube.

Let us know your favorite trot singer in the comments!