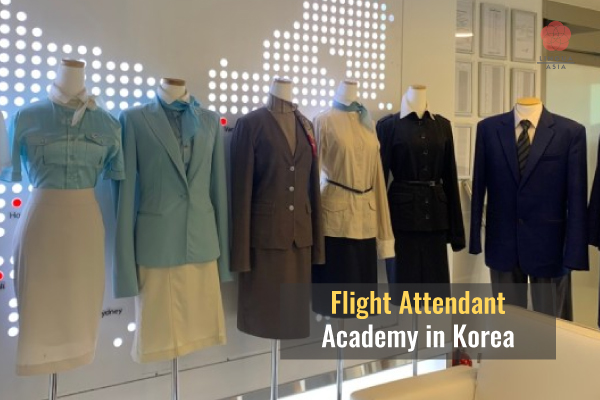 There are places in South Korea where 20 something, mostly females pay money to learn how to get a job as a flight attendant (yes, cabin crew is a desirable career path in Korea).

They call them “stewardess academies”, and at one point, they were big businesses.

This is about how I managed to get a job at one and keep it for 5 years.

As with many good things, it started with a serious yoga/stretching session in a dark room.

I was working out in my neighborhood gym at night, which is something I don’t often do, when I noticed a muscular Korean man sizing me up. This continued throughout the duration of my pump.

No big deal, it happens.

When I went to the aerobics room, or “GX room” as they call it, he was there in the dark, seemingly waiting for me. I was in my 20s and still full of testosterone, so instead of backing away slowly, I went in.

We stretched across from each other in uncomfortable silence for what seemed to be an eternity, until he asked me if I spoke Korean.

The chip on my shoulder was but a hairline fracture then, and the protective barrier I’ve grown was a thin veneer, so I said “yes” and engaged him openly.

He asked me if I wanted a job and I said, “it depends, where do you work”. He said, “stewardess academy”. I immediately said yes.

They needed a native English speaker to teach interview skills to prospective cabin crew who wanted to work overseas.

He could have offered me a custodial engineer position and I would have taken it.

I sent him my resume and cover letter and that was the extent of the interview process.

The day before I was supposed to go, he called me and told me not to come.

Apparently, a competing hagwon dimed on them for hiring a foreigner without the right visa.

This was a sign of things to come as it’s a cut-throat industry. Think Tiger King, but with airlines instead of furry apex predators.

I told him that I had the proper work visa, sent him a copy and we were all good.

It’s super competitive to get a job, up to 1,000 people apply for each position

Stewardess academies in Korea are a multi-million-dollar industry

It costs about 1,300 dollars to enroll in a 3-month course

Few take them up on that offer

What it was like working at a flight attendant academy

My first day at work, they put me in front of a room of 30 attractive young women who hung on my every word, even though I didn’t know what I was saying.

It’s common in Korea to just show up to your first day of work without any training, and fly by the seat of your pants. It’s also common for students to respect teachers and write down everything they say.

Every three months, they would interview potential candidates and choose 30, mainly females in their 20s. It was overwhelming for the first few weeks and I definitely winged it.

Little did I know, they had hired me to teach English interview skills for a course sponsored by Korea HRD, a department created to help Koreans get jobs. In order to collect that sweet sweet government dough, the academy needed a native English speaker, me.

Luckily, they didn’t seem to care what I taught, as long as there were no complaints.

Most teachers who were former cabin crew didn’t respect me, and rightfully so.

I didn’t know anything about their job.

I couldn’t point out Qatar on a map (this was well before they won a bid to host the World Cup.). And that was where they were hiring most of our students.

I believe that respect is earned, not given, so I read everything I could get my hands on about airlines, the cabin crew job and most importantly, the interview process. I adopted my curriculum to focus on basic conversation skills, small talk and spontaneity, the biggest weaknesses of the Korean education system.

Domestic airlines such as Korean Air and Asiana interview people in groups at first. This is partially because there are so many applicants. Interviewees remember answers to questions and repeat them with a smile. Rehearsing and performing answers word-for-word doesn’t really cut it at foreign airline interviews.

I focused on natural conversation flow between candidates and interviewers.

I worked this way for a few years acting and lecturing at a finance academy (they love their academies there) until I was offered a full-time position.

I was given a chair and a desk but no job title or specific duties.

The first thing I did was revamp the English interview curriculum. I thought we could differentiate ourselves from other academies by having the best education program.

The owner of the academy wasn’t impressed. It turns out that curriculum isn’t high on the list of priorities for prospective students.

What they really wanted was a job.

The owner gently prodded/gaslit me into doing overseas marketing. She really wanted me to get them recruitment campaigns from Qatar, Emirates and Singapore Airlines.

I cold called, wrote emails, made company presentations and set up meetings in Dubai, Doha and Singapore.

We flew business class all the way to Dubai just to meet with the head of HR in a Costa Coffee for 15 minutes.

After three months of trying, we landed a major recruitment drive with one of the big gulf state airlines.

My position was secure after that.

We advertised the first round of recruitment in Korea and 2,000 people showed up. I interviewed upwards of 500 people a day that weekend. They even wrote about me and my interview style in the main Daum cafe.

Interviewers would then fly over from the middle east and we’d pamper them from door to door. We’d pick them up at the airport and make sure they were fed and happy at all times.

They were mainly from other countries such as Sri Lanka, Poland and Australia, since most workers are imported in that region.

I was able to get another campaign and I became nearly untouchable. Having contacts in this business made me far more valuable than being a good teacher or interviewer.

We ran the recruitment campaign with another stewardess academy whose owner was bitter rivals with ours. They would spy on each other with teachers and students alike. They would also wine and dine government officials and airline HR managers to get a leg up.

I’d be lying if I said I didn’t get in on the action. You had to prove your loyalty.

It was important to be careful who you met and what you said. One wrong move and you’d be branded a traitor. Sort of like being in the mafia, I’d imagine.

After a few years of this, the other academy folded and the owner asked for a job at ours, and was politely refused.

During that time, I secured a few more campaigns at other airlines including the holy grail of them all, Emirates.

Why I stopped working at the flight attendant academy

Over time, my list of duties continued to expand. I was doing 3-hour lectures 3 times a day sometimes.

I would work weekends when there was a recruitment campaign.

I also would entertain interviewers and HR managers who visited Korea. This is known as being “sool sangmu”, or “director in charge of drinking”.

It was a lot of fun and I learned a lot, but it took its toll.

My body started failing me.

I actually couldn’t digest food for a week, which was disturbing to say the least. I also started getting quite irritable at everyone from teachers to students.

I never was given a formal title and my duties were whatever they needed at the moment. Feedback was in short supply while uncertainty was abundant.

Some employees would make subtle digs at me when I left at 6pm sharp.

Work is measured in time, not productivity in Korea.

There’s an unwritten rule at Korean companies that you don’t leave until the boss does. This can be problematic if they don’t get along with their spouse.

They kept adding new departments and I was tasked with creating an entirely new business including the website, all accompanying documents and a logo.

I was so tired of resisting that I just rolled with it.

After I had made a new business from scratch and gotten major brands to sign MOUs, I realized that I could just start my own.

By then I had met my future and now current partner who was going through a similar thing at her job.

We started brainstorming business ideas until we decided to start a translation company.

I have this experience to thank for the things I’ve accomplished since then. It changed the course of my life from acting or corporate gig to becoming an entrepreneur and slow traveler.