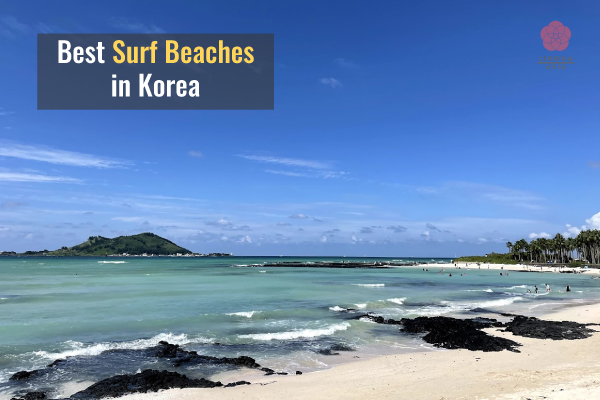 OK, you probably thought of a few instantly.

So, South Korea isn’t the first place that comes to mind when you think of surfing hotspots. I’ll have you know, it’s now home to the Jeju International Surf Competition in Jungmun and a surfers-only beach called, wait for it, “Surfyy beach”.

Sure, it’s no Bali, but Korea has loads of fun choices that are beginner-friendly with some intermediate locales as well.

Great news for those traveling to South Korea (who don’t want to pay a fortune to check your board in at the airport), you don’t need to bring a thing except your wallet. Thanks to Korea’s entrepreneurial spirit, surf shops will rent you everything from wet suits to rash guards.

Now they just need to make a K-drama about surfing and we’ll start making the connection.

Here are the top surf spots in Korea that you should check out.

My first time surfing in Korea was back in 2011. I worked with a super sporty Bujang at a stewardess academy who took me surfing in Yang Yang, Gangwon-do.

It was me, him, his friend and a few confused guys on long boards catching two-foot waves. Being born and raised in Southern California, there was a lot of pressure on me to perform, even though I’m not considered good where I’m from or most places for that matter.

It felt like when they’d put an Eminem song on at noraebang and expect me to rap perfectly since I’m from the states. Jokes on them, I can’t!

Needless to say, I showed those 1-2 foot waves who’s boss and had a pretty good time. I wouldn’t say I was hooked but I did endeavor to surf a few more times while in the country. It’s still super nice to get out in the water and clear your head.

Surfing has become mainstream since then and the number of locations has multiplied. With popularity comes some welcome or unwelcome changes depending on your style.

Many beaches that were low-key and chill have become veritable amusement parks that attract an endless parade of big city folk and their big city ways.

It’s a mixed blessing because you now have many bars, cafes, restaurants and clubs to choose from, but it feels like Seoul followed you to the beach.

Whether you love the energy of the crowd or you seek tranquility, read on to find the surf beach in Korea for you.

Quick tips for surfing in Korea

Go early if possible to avoid the crowds

Winter is the best time to catch decent-sized waves

Wear a 4.5mm wetsuit or drysuit, hood, shoes, gloves if you surf in winter to ward off hypothermia

200,000 people a year visit Yang Yang alone to surf, so you can imagine things get crowded.

Watch out for beginners, they don’t know how to turn. Like they say, a little bit of knowledge is dangerous.

Try to stay on the sides of the “wave of surfers” (this is the actual collective noun) and never in the middle. It’s like being stuck in traffic.

I’ll start with my favorite place to surf in Korea.

Located where the east sea meets the south sea, Songjeong gets both northern and southern winds for an ideal high tide all year round. The shallow water level also makes it a good spot for beginners. It’s a bit tough to access and not as popular as beaches nearby, so you can catch more waves.

Songjeong has the added advantage of being close to Haeundae, which is a great locale to hang out when you’re done surfing. You can have a laid-back experience during the day and still go out to Haeundae and rage at night.

Jungmun is home to an international surf competition, so you know it has some decent waves. It’s the place for serious surfers. Just watch out for the rocks on the left side.

I was there last summer and had a decent swim, although the waves weren’t happening that day. If you’re unable to surf, you can enjoy one of the many activities such as parasailing, water skiing, windsurfing, scuba diving, rafting and a yacht tour.

There’s a newish bar on the adjacent cliff called, you guessed it, “The Cliff”. It has a nice view of the ocean and a fun party vibe.

Jungmun is the right place on Jeju to surf during the day and party all night.

Not just fun to say, Yang Yang has a few decent surf spots that are only a few hours away from Seoul.

Jukdo was the first place I went surfing in Korea. I loved how tranquil it was and enjoyed the beautiful view of a sea rock covered with trees while waiting for waves. This was before it was cool (at least the surfing in Korea part) and I had a really relaxing surf.

Jukdo has become more popular and commercialized, but is still understated compared to one of the entries coming up. It’s wider than the surrounding beaches with a lot more infrastructure, so it’s a great place to bring kids.

Like most beaches in Korea, the water is shallow and waves break closer to the shore. The depth is pretty consistent and the waves are generally small, so it’s great for beginners.

You can also go camping nearby which is nice.

The home of the first surf school in South Korea, Gisamun is where the local surfing culture started. You get some decent barrels in winter, which are super rare in Korea.

It’s a great option when the nearby Jukdo and Surfyy beaches are too crowded.

Gisamun feels more like “surfer’s” beach, instead of a combination of a photoshoot and Coachella light.

It does get a lot of refugees from Surfyy Beach who are fleeing higher prices and lack of reservations.

It is a bit smaller than the surrounding beaches, so it can feel cramped if there are too many surfers in the water.

Nothing says fun and sun more than a beach formerly controlled by the military.

Surfyy Beach is the only spot dedicated to surfers in the country. And yes, it was patrolled by the military until 2015 when it was turned into a “surfmusement park”.

Now, they’ve got a whole Coachella vibe going on with teepees and canopies.

Don’t let all that fool you though, the beach gets some decent swells.

There is a 10,000 KRW fee to use the facilities, because it’s a private beach. A private beach that gets surprisingly packed.

If you do want a lesson, you need to book in advance. Otherwise, it’ll be back to Gisamun with the rest of the outcasts.

The cool thing about Surfyy Beach is that you don’t even have to surf to enjoy it. You can simply soak up the vibes in one of the many photo spots. You’ll also have plenty of places to purchase alcohol (as long as it’s Corona) and listen to house music.

Bask in the glow of multinational brands while having an endless summer.

Ideal for beginner to intermediate surfers

Word on the street is that Sonbong in North Korea is one of the best-kept secret surf spots in the world! In fact, the whole Eastern side of North Korea has a long and sharp coastline, and gets regular swells.

I wouldn’t recommend going there until after a major regime change. The military controls the surrounding beaches as they’re always on the lookout for an invasion, from us. So you won’t want to end up at the wrong beach.