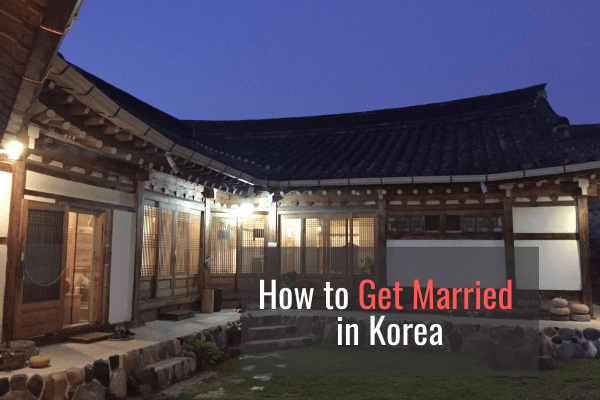 Not sure how to get married in Korea?

Marriage between Koreans and non-Koreans is becoming more common.

There are a few things to know before tying the knot. Don’t worry though, it’s pretty easy.

This guide will show you how to make it happen!

Before or after the ceremony, the couple visits city hall or a district office (구청) and registers their marriage (혼인신고). The ceremony is actually considered more important than registering in Korea!

It’s also possible to have a beautiful South Korean traditional wedding ceremony and register in your home country. It gives you an excuse to throw a quirky and fun party called hahm too.

After marrying a Korean, you can obtain an F-6 visa that allows for long-term stay and employment.

Benefits of getting married in Korea

Getting married is a big decision that should be taken seriously. Doing so in South Korea does have its advantages.

After marrying a Korean, you can:

In summary, you need:

Check out some affordable Korean translators below.

How do I change my Korean spouse’s surname when we get married?

In general, Koreans can’t change their names on a Korean passport.
Instead, you can add “spouse of _(spouse’s last name)” next to the last name when you make a new/renew Korean passport at a government office (구청/gucheong).
(When you apply for a green card or citizenship, you have a chance to change your spouse’s last name.)
In order to add your spouse’s last name on your passport, you need to bring your ID card, 1 passport photo, copy of your spouse’s passport, your existing passport, money to renew your passport (50,000 won).
You don’t need to bring a marriage certificate (혼인증명서) because a gucheong officer can check it on their system.
Once you’re at the gucheong, you need to fill out a basic form for applying/renewing your passport, and an application for name change.
Simply add “배우자의 영문 성 추가 희망” as a reason for name change.
Just make sure to call and double check which documents to bring to your gucheong before you go.